Though he has been taken for granted and misused by Hollywood for years, Brendan Fraser is still a damn treasure. 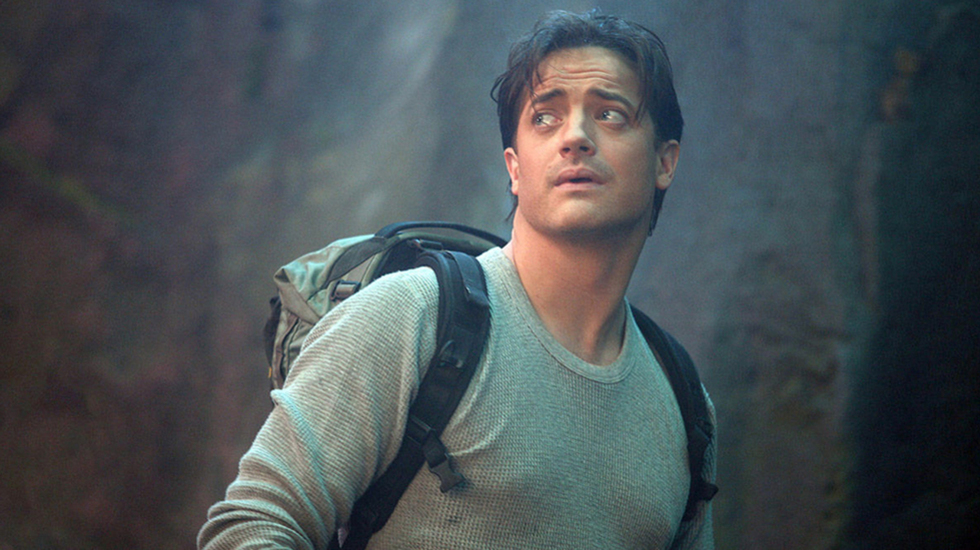 When you hear the name “Brendan Fraser,” what’s the first thing you think of? Is it the rubber-faced, tenderhearted comedian featured in films like Bedazzled or Blast From the Past? Or maybe you think of the brooding intellectual seen in movies like With Honors and School Ties? Or perhaps you fondly remember him as the loveable goofball in comedies like George of the Jungle and yes even, Dudley Do-Right? No, most likely you think of him in the present day: a middle-aged actor, fighting a paunch and hair loss, bouncing back and forth between different kid movies and “dad” roles, no longer fit for the role of “action hero.”

And that’s a shame. Whatever your opinion of Brendan Fraser might be, there is one fact that is undeniable: he used to be a movie star. That’s right, a bondafide, and totally legit movie star. One reason that he attained this status was his incredible aptitude for sincerity that has endeared him to audiences throughout his eclectic career. In his hey day, he played roles as varied as a caveman, student (twice), rocker, athlete, war veteran (twice), millionaire set of twins, and a Canadian Mountie.

Sure, some films were more successful than others, but Fraser’s unquestionable screen presence made them all watchable. Because of his adaptability, it is difficult to categorize Fraser in any one type of role—he looks at ease whether he’s playing a Neanderthal or a Harvard man. Ironic that this versatility has proved to be a hindrance instead of an asset in his later years.

Perhaps Fraser would have been better suited to a different era of filmmaking. What if he had been alive during the height of screwball comedies? With his lanky frame, earnest demeanor, remarkable physicality and comedic skills, he would have been the perfect foil for actresses like Barbara Stanwyck and Katharine Hepburn. Plus, he would have looked great in black and white. After the time for being a matinee idol had passed, he could have easily slipped into character work. But alas, he came of age in Hollywood during the 90s and a creature of the 90s he remains.

During that decade, Brendan Fraser ruled, appearing in films opposite other 90s icons like Pauly Shore, Adam Sandler, Ricki Lake, Joe Pesci and Alicia Silverstone. His first major movie role was in Encino Man in which he played Link, a frozen caveman who gets de-thawed by Shore (playing a character named “Stoney”) and Sean Astin. The film could have been a disaster; instead, it was a triumph. Fraser’s child-like Link became universally beloved, so much so that he reprised this role briefly in two more movies.

Encino Man is worth a rewatch if only for Fraser’s performance. Just watch the scene in which Link mourns for the loss of his people as he looks at remnants of his culture in the History Museum. Being completely non-verbal, Fraser must speak volumes with his eyes, and he manages to convey frustration, confusion and grief in a single glance. The moment, filled with genuine pathos, seems out of place in such an extreme comedy, but it works.

Perhaps Fraser would have been better suited to a different era of filmmaking. What if he had be alive during the height of screwball comedies?


Fraser’s next major project that year was School Ties in which he plays David, a Jewish student on a football scholarship to an elite prep school. Fraser’s co-stars include Chris O’Donnell, Anthony Rapp, Ben Affleck and, perhaps in the most villainous role of his career, Matt Damon as Charlie Dillon, a jealous anti-Semite who tries to rally classmates against David. In a field of Hollywood’s most promising stars, Fraser held his own, commanding the screen as David struggles with difficult choices—should he sacrifice his identity to gain intellectual and economic advantages. It’s hard to believe that this character is played by same actor who guzzled Slurpee’s straight from the nozzle in Encino Man.

The mid-90s proved to be fruitful years for the Fraser as well. He starred in movies like With Honors, Airheads and The Scout, playing a variety of different and difficult roles. In The Scout, co-starring Albert Brooks and Dianne Wiest. Fraser plays Steve Nebraska, an unstable baseball prodigy who has to face his demons in order to be signed by the Yankees. Fraser’s natural athleticism, charisma and dramatic range allow him to turn in a remarkable performance.

Other stand out roles included a small part as a nameless Vietnam veteran in in the coming-of-age drama, Now and Then. Fraser seized his moment in a memorable scene in which he briefly encounters the band of precocious young women on the road and evokes hints of dangerous sexuality and deep-seated wounds while harmlessly sharing some orange soda with the troop. In Mrs. Winterbourne, he proved himself to be a capable romantic comedies lead, playing a wealthy man who falls in love with the woman successfully posing as his twin brother’s widow. Now, how’s that for a screwball comedy plot?

Ironic that Fraser's versatility has proved to be a hindrance instead of an asset in his later years.


In 1997, Fraser lost all his baby fat and grew out his hair to play the title role in George of the Jungle, once again playing a man of few words. Perhaps Fraser’s facility with at playing wise innocents would later make it difficult for him to be taken seriously in other roles even though his performance in a movie like Gods & Monsters (as an angry ex-veteran) demonstrates that he is capable of much more.

In 1999, Fraser finally entered the action/adventure realm with The Mummy as Rick O’Connell, an American serving in the French Foreign Legion who gets mixed up with a comely librarian and her brother in a quest to find the lost city of Hamunaptra. They encounter many obstacles, including a very angry Mummy, and the film is one enjoyable ride. Fraser is comfortable at the helm, throwing witty banter back and forth with a relativity unknown Rachel Weisz, radiating All-American charm as he bashes heads all over Egypt.

Then something happened. Despite solid turns in movies like Bedazzled, Crash, and The Quiet American, audiences (and Hollywood) stopped taking Brendan Fraser seriously. Critical and commercial bombs like Monkeybone and Looney Tunes: Back in Action didn’t help, of course. Two more installments of The Mummy and franchise-bait drivel like Inkheart and Journey to the Center of the Earth didn’t lead anywhere either. When he took part in one of the most ill advised movies of all times, Furry Vengeance, playing a real estate developer who is tormented by various woodland creatures, it was over!

Fraser still possesses his full arsenal of talents, and though he is older and not as pretty as he used to be, with age comes experience.


So is it possible for Fraser to reclaim some of his former glory? Absolutely. On a positive note, Fraser has become a familiar face in the indie film world, and we have had the pleasure of showing several of his films at our Festival, including Journey to the End of Night, Terry George’s Stand Off and last year’s A Case of You. He’s great in all of them. Fraser also had a successful guest stint on Scrubs, playing Dr. Cox’s free-spirited, fun-loving best friend who gets diagnosed with leukemia.

So is anyone listening out there in Hollywood? Fraser still possesses his full arsenal of talents, and though he is older and not as pretty as he used to be, with age comes experience. His versatility would allow him to play villains as well as heroes, and he certainly could shine in television dramas or comedies. Fraser should be given a chance to be in the spotlight again. All he needs is the right role.