The VR pioneers will be the main attraction at the Tribeca Film Festival's innovation headquarters, the Tribeca Festival Hub. They spoke to us about their trajectory from film students to leaders in an emerging field. 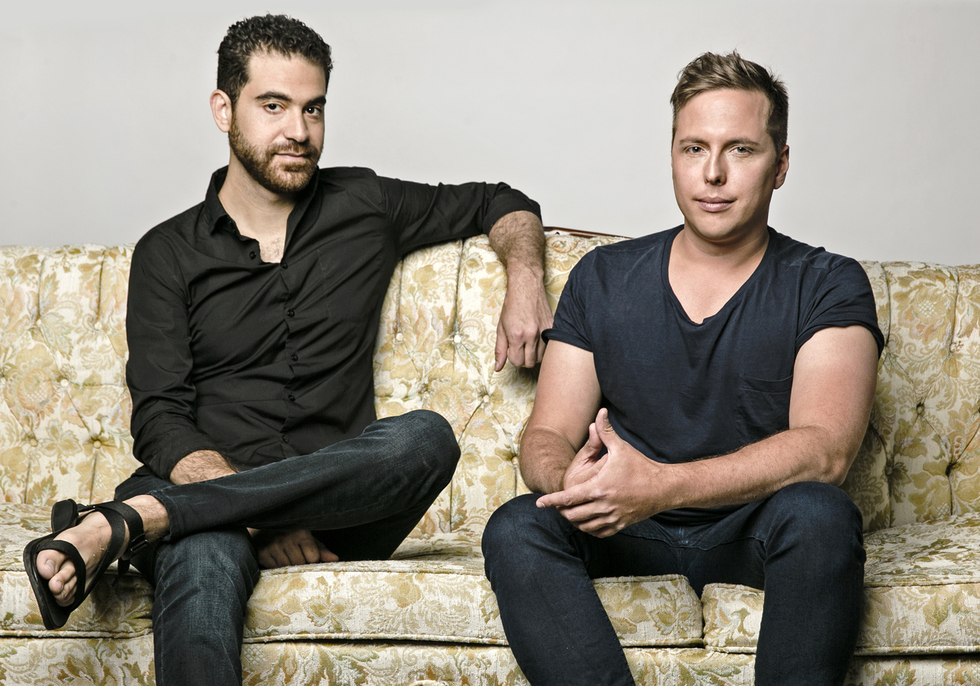 Aiming to accelerate virtual reality as an "extension of reality itself," Félix & Paul Studios is at the forefront of VR experimentation and now the Featured Creator at this year's Tribeca Festival Hub. Its founders, Félix Lajeunesse and Paul Raphaël, will be on-site at the Hub for the Virtual Arcade, running April 18-23.

It's a great opportunity for visitors to engage in conversation with Lajeunesse and Raphaël, as well as experience four of their widely acclaimed projects, including a pair of documentaries, Nomads: Sea Gypsies and Nomads: Maasai, which premiered at this year's Sundance; LeBron James: Striving for Greatness, an intimate profile of the superstar, and the Emmy-nominated Inside Impact: East Africa, with President Bill Clinton. Two of these videos, East Africa and LeBron James are available to experience on Facebook 360. For the fullest effect, use a Samsung Gear VR headset, or, more simply, use the cursor on a computer or your finger on a mobile device to move around in the space.

On April 19, Imagination Day will host one of the largest virtual reality activations ever, with 500 VR Gear headsets being made available to the audience. The presentation, designed and conducted by Felix & Paul, will include several of their VR films in addition to those being exhibited at the Hub.

Félix & Paul are one of the leading virtual reality studios and among the first to gain recognition for innovation in this emerging field. They've recently received two nominations for Daytime Emmys in Outstanding Interactive Media, for Inside Impact: East Africa and Inside the Box of Kurios. They have been profiled by several outlets, including the The New York Times and The Hollywood Reporter, and were earlier this year named Verge's "favorite virtual reality filmmakers." Their recent partnering with Oculus, in light of the pending release of its advanced head gear Oculus Rift, has even further elevated their place in the VR world. They have worked on companion pieces to films, collaborating with Universal Studios for Jurassic World: Apatosaurus, a VR experience that brings viewers up and close to the dinosaur. This had followed an earlier piece, Wild the Experience, which placed viewers alongside Reese Witherspoon and Laura Dern in the 2014 film Wild.

Montreal natives Lajeunesse and Raphaël have been collaborating for over ten years, and only recently, in 2013, created Felix & Paul Studios to fully devote themselves to the virtual reality medium. They were film students at Concordia University, and their short Tungijuq screened at Sundance in 2010. They have also worked as editors for features. Thus, their approach to VR is intimately tied to their love for cinema. “Our first interest was in experiential film,” explains Lajeunesse. “The films of directors like Ozu, Malick, Kubrick, and Tarkovsky have a very strong immersive power. Their pacing is slower, and you really get to feel one with the environment and characters. This immersive cinema was very attractive for us, and it was that common interest that brought us to work together.”

They quickly went from directing short films to imagining and creating new storytelling tools. “We wanted to rethink cinema itself to transcend the film screen," says Lajeunesse. "To try to bring the viewer into a more direct sense of sensorial immersion beyond what the cinema could do, we started to create video installations, working with physical spaces, projections, holography, and 3-D tricks, to make the viewer feel inside the cinematic work. It required tools that did not exist. Even though we don’t come from a tech background, we started to create our own technology. As we started to design the tools, we gradually improved on them and wanted to reach the next level."

"In early 2012, we heard of the progress that was being done with virtual reality," he continues. "We then started creating a 360° camera. We met the Oculus team in 2013 and shared with them our discoveries. At that time, Oculus was coming at virtual reality from a gaming angle. We came to it from immersive cinematic storytelling. We immediately connected and started very intensely exploring the medium.”

Raphaël emphasized that the key to their approach to VR is presence. “The very first thing we do developing a project is figuring out who the viewer represents and what is the nature of their presence in the scene. Human beings are a big part of virtual reality, so a beautiful environment is nothing without a person there to make you appreciate it. There’s a symbiosis that happens with the co-presence of the viewer and the character.”

Lajeunesse further explains, “We want the viewer to feel effortless so that he or she can surrender to or fall into the experience. We try to create a connection between the physicality of the viewer and the world of the virtual reality. Your presence should be felt by the characters inside the film. This creates a relational perspective. In Stranger, we conceived of the viewer as a friend visiting an artist. In Jurassic World: Apatosaurus, we conceived of the viewer as a park ranger. The dinosaur recognizes you because you go there often and have a relationship. We designed the set so that you feel like an insider in the park who spends a lot of time there.” In their film with LeBron James, the camera takes on the perspective of a member of his entourage, and he speaks directly to it and, thus, the viewer.

The duo see their work as attempting to evoke emotions rather than educating. “It’s not about teaching something in particular but rather feeling something in an unprecedented way," says Raphaël. "In the Nomad films, you're basically sharing the reality with one of those people as if you were one of them. There's no narration, and it doesn’t make you try to think a certain way. You’re free within that space. It’s anchored in reality, but not a documentary. VR breaks the emotional distance that exists between human beings. If you’re seeking that emotional and psychological connection with others, you can do that with VR.”

Many of Felix & Paul's VR projects are now available to viewed and can be found on the Felix & Paul website.