Do you feel like dancing? After watching ‘Flex is Kings’ you definitely will. Co-Director Deidre Schoo talks with us about stunts, style, and grace, which are all epitomized in this new art form. 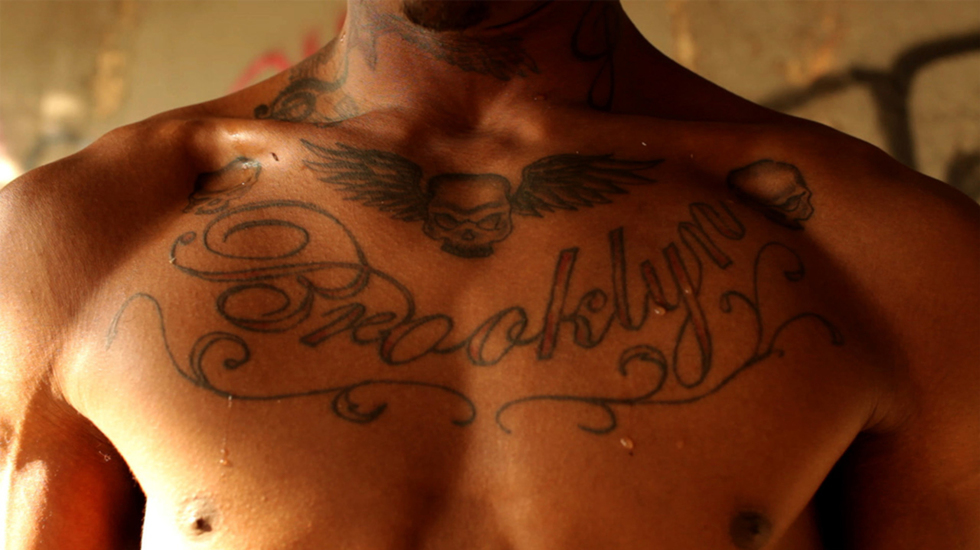 Tribeca: Can you talk little about Flex is Kings. What inspired you to tell this story?

Deidre Schoo: Well, it all started in 2008 when I met a flex dancer named Story Board Professor. He was in a variety show at St. Nick’s Pub in Harlem, and he was the only dancer there. He just blew me away. So I approached him and struck up a conversation. He told me about flexing and that it was from East New York, and that they primarily met at an event called Battlefest.

So I looked up Battlefest and I started going. I photographed there for about 2 years, but my images weren’t really capturing the full story. I was so amazed by this self-organized community that I knew it had to be turned into a film. It’s just an incredible group of really incredible and inspiring people.

Tribeca: This was first time I’d ever seen Flex. I wanted to ask you about the vignettes that led the film into the different segments.  Can you talk a little bit about choreographing those sequences?

DS: We really wanted the film to encompass what the whole Flex community represents and we wanted to represent the whole community. We had a lot of footage of dancers, so that’s how those came about. We were happy to work into these wonderful moments and pieces that we hadn’t yet fleshed out into full story lines. Because it’s such a narrative dance form, it felt really right to have the film interconnect through various scenes and dance movement pieces.

Tribeca: There were so many interesting characters and dancers featured in Flex Is Kings, especially Flizzo and Jay Donn. How did you find them? Were they always up to being documented?

DS: They were very open with their lives and really understood what we wanted to do. We just wanted to be a part of what was going on, so there was a little bit of directed camera stuff, but not much. We wanted it to play like a narrative. They really understood that and became comfortable with us fairly quickly.

They were each so charismatic and compelling in very different ways.Jay is buoyant and wiry whereas Flizzo has this uncharacteristic body type for a dancer, but one of the brilliant things about Flex is that it has room for a wide spectrum. If you have style and you bring imagination, grace, confidence, and ingenuity to the floor—they respect you.

Tribeca: And Flizzo had so much of that showmanship, being one of the few in the documentary who utilized props.

DS: Right, Flizzo is known for punch lines; Jay is too. Punch lines are a really important element of Flexing, and a punch line can be a smile revealed in a tense moment, or it can involve very elaborate props and re-imagining of everyday items. One of the dancers worked at Staples, and being around office supplies all day, he would come up with the craziest and most awesome things too.

They’re there for each other, and dance absolutely gets them through it.

Tribeca: You did mention Battlefest, which is run by Reem and other sorts of prominent companies. How did you get involved with them? Can you describe the atmosphere of one of these events?

DS: Battlefests last for so long. They go on for more than four hours. They are epic events.  They occur four times a year, and so the community is working in those down months, thinking about what they want to do, coming up with surprises and honing their movements. They say the Battlefest is going to start around 1, but usually they won’t start until 3 or 4. They fill up more and more as the battles go on, until at the end of the night they’re being kicked out of the venue while people are still arriving. These events are overcrowded and beautiful.

Tribeca: While it is a competition, it is also a big community event. There is the scene of  Flizzo battling and losing to another dancer. Flizzo comes across as a very passionate man, so when he goes and meets the guy who bested him—it was a really nice moment to see them embrace. Can you talk about shooting within the community?

DS: I was surprised how open the community was. I think because people had seen us out with the dancers, we were never given a hard time because the neighborhood knew who we were. We stood out because there is nobody who looks like us, especially me, a 6-foot tall white girl. Nobody else looks like me, so they’re like “Oh, that crew. We know they are doing the thing with the dancers.”

And in the summer time all the neighbors are outside on their stoops, so they see everything. We never felt threatened; we always felt pretty well taken care of, especially because we were associated with Flizzo, who is not just a dancer but a man about town. He’s on the street every day; he’s got his corner that he kind of holds down outside that bodega. You can’t walk down any street with that guy where he doesn’t know someone.  So we had this very fortunate umbrella of protection just because of what we were doing and who we were associated with.

Tribeca: How many hours of footage do you think you compiled in total?

DS: It was roughly 275 hours of footage, because most of the time, we were shooting 2 cameras. And at Battlefest, we would shoot 3 to 4 cameras.

Tribeca: Wow. Well, the art of Flex it’s all about those little movements.

DS: Yes, the dancing is in a ring, and because there is no stage, you never know which direction a dancer is going to be facing. We knew where their opponent would sit, but we needed a couple of cameras on the ring, and I was always backstage following our competitors. On the morning of Battlefest, we’d have 3 different crews out, and we would fan out to get all these things that were happening simultaneously.

Tribeca: The film itself has its own pulse and its own beat. Could you talk about the score of your film and who you worked with and how that came about?

DS: We worked with a duo collectively known as Tranimal—Chris Lancaster and Jerome Begin. They have been playing for dances for 10-15 years. So they understand movements like a regular film composer might not. They are absolutely incredible. We just got lucky that Chris and I went to undergrad together, so it was a long time connection. When we started working on this film, Chris heard about it and he came to me. He was blown away by the dancers and was interested in collaborating with them. He asked to do our film score.

It worked so well, and we couldn’t have asked for a better combination. Since then, our composers Chris and Jerome have gone out on several occasions and live improvised with the dancers.  The dancers love working with them and vice versa. It spun off to different opportunities for the dancers with their own dancing collaborations.  So it’s really cool that they have created another force that lives alongside of and inside of each other.

Tribeca: One of the major out of the box collaborations featured in the film was Jay Donn and Company 14.

DS: Right. From what I witnessed, I think he had an incredible time working with the company. I remember the artistic director telling us early on that he couldn’t believe what a high learning curve Jay had. He picked things up so quickly. That says a lot about dance and Flexing and how much these guys train, because Jay had the ability to jump in with no formal dance training. He learned by just working and dancing every day, and all that activity transferred into a professional performance space pretty seamlessly.

Tribeca: What are Jay and Flizzo doing now? I know we got a little aftermath in the documentary.

D: Well, Flizzo is still working in the neighborhood, mentoring younger kids. Flizzo is very integrated into Battlefest and helps out a lot. Jay has been touring with Bad University,  an artistic collective with Sky Blue from LMFAO. So for the past year and a half, Jay has been all over the world.  I’m jealous.

Tribeca: That’s exciting. You mentioned that Flizzo is doing mentoring and that both Flizzo and Jay and a lot of the other dancers have troubled pasts. Do you think Flex is a sort of therapeutic art for them?

DS: 100 percent, yeah. Flex is therapeutic. I’ve heard them say that after a Battlefest. There are certain voices in a community, a hierarchy. The older dancers have more pull because they just have that authoritative voice within the community. You’ll hear them say, “Dance it out. No fighting.” It’s amazing. They encourage each other to work it out because they’re young and are often in pretty stressful situations. They might not have the support that other kids have like with single parent households. They’re there for each other, and dance absolutely gets them through it.

Punch lines are a really important element of Flexing.

Tribeca: Flex is Kings was completed thanks in part to the aid of a successful Kickstarter campaign. Do you have advice for filmmakers who might consider using the site for fundraising?

DS: This film has been entirely funded by the support of our friends, families, and fans, and through our contributions. We ran a Kickstarter campaign roughly a year ago that funded the editing and the putting together of the film. We used donated film during production, but we couldn’t do that with post production. So we ran a Kickstarter campaign last year, and we had to run one again now to get through music rights, sound mixing, and music direction, and to get us ready to screen with Tribeca!

It’s a blessing and a curse a little bit. While you build your audience, it is difficult to approach friends and family, but they have been beyond amazing.  I can’t believe they’re not annoyed, and if they are, they get over it.

Tribeca:  Once they see the film, they’ll know that it was all worth it.

DS: Right. If you want to run a Kickstarter campaign, really think about it and be strategic. Plan it out, plant seeds, tell people you’re doing this, ask for their support in person, do a lot to build that foundation offline and then take it online.

DS: Gosh, I guess just sharing a film with an audience. I want people to be swept away with the power of art and dance in the community. Creativity can change people’s lives.

Tribeca: What makes Flex is Kings a Tribeca must see?

DS: It's a real New York story. The film comes literally from the streets. The Flex movement is a new evolution of style and love and life and youth and exuberance.