Insights from our Future of Film panel on the challenges facing journalism. 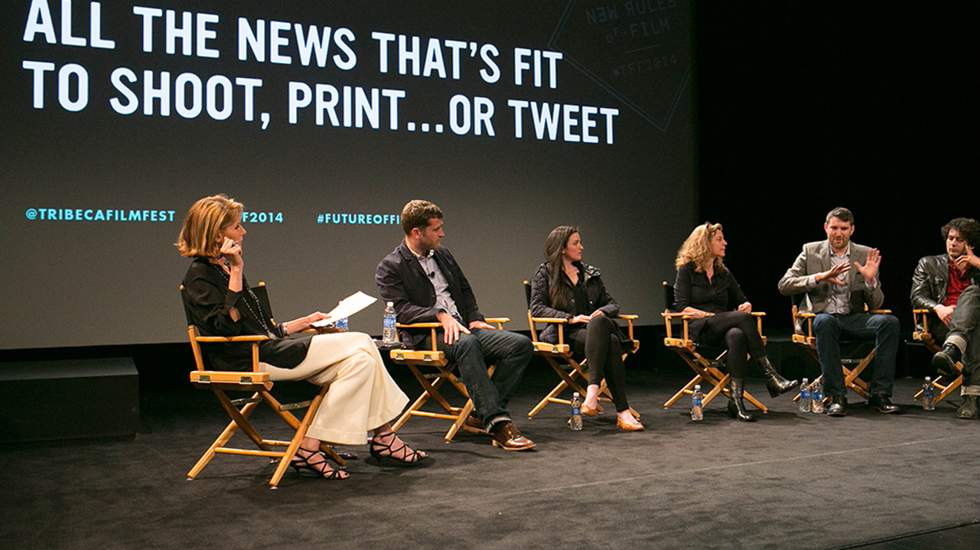 The collision of documentary, professional journalism and citizen journalism has shaken up the news industry in recent years, with old standbys like Time and Newsweek undergoing changes while upstart modes of reporting like Vice's HBO series blossom; and of course, there's also viral-gearing websites like Upworthy curating content that is something of a documentary/news hybrid, geared toward exploding via social media.

1. Advertising oneself as a journalist is a great way to put yourself in danger nowadays.

With contemporary media outlets enabling journalists to have so much impact so quickly, militants around the world are quicker than ever before to act hostilely toward journalists. The panel began with the sad news that Vice journalist Simon Ostrovsky was kidnapped just yesterday in Eastern Ukraine by pro-Russian forces.

2. The fact of being a journalist can make in-depth reporting difficult.
Leigh, who reports often from within Syria, lamented the fact that, due to security measures, it's difficult to do in-depth in-field reporting, because journalists can only be safely in country for up to four hours at a time - "And around the fourth hour, you start getting nervous," she explained. She stated that journalists going into Syria often have to keep their travels relegated to cities near the Syrian border.

3. Citizen journalists are becoming empowered.
Thijm explained that her organization educates citizens on how to effectively perform citizen journalism, through the uses of camera phones and other recording devices. Clips screened before the talk of Brazilian police brutalizing protesters - which were filmed by Brazilian citizens - are perfect examples of the sort of reportage Thijm believes will become more prevalent as more citizens become active journalists.

4. Doing the journalism is only half the battle.
Pariser explained how a huge part of Upworthy's mission is to not simply produce journalism, but find the most effective way to disseminate it. He explained that Upworthy does studies, using a number of metrics - not simply relegated to clicks - that determine which of the site's videos provoke the most interest. Indeed, in Pariser's estimate, marketing the stories Upworthy tells is as important as the journalism itself.

5. The roles of journalism blogs are evolving.
Leigh spoke about the many different roles that her blog, Syria Deeply, can possibly play. "The narrative of what people are discussing on social media every day is different from what's being discussed in The New York Times," Leigh explained. "We're working on defining our role - are we a filter for what's important? Is it about producing analysis like something you might have seen in Time ten years ago, or is there a different way to present news?"

6. The definition of journalism itself is evolving.
Thijm explained that she believes "the journalism narrative may be disappearing" - the sort of analysis Time magazine might devote to a subject - but "a new kind of storytelling is emerging, unhindered by gatekeepers. New kinds of stories are coming to the fore through social media, and we can let the public decide which stories they believe are important." Pariser seconded this, saying that he doesn't conceive of Upworthy as a news site. "The way that people come to engage with a story has more to do with the presentation of the story than the facts," he explained. He went on to detail how a dry news article listing statistics of casualties is not as emotionally affecting as a video about one individual's experience. "I think this is ok," Pariser went on. "Narratives are exciting."

7. One has to be careful when getting news from Twitter.
Leigh told an archetypal story about a journalist friend who put a detail in a story about how Kurdish militants were going around with spoon necklaces on, because they believed the spoons would enable them to eat food with Allah once they reached heaven; the detail had emerged via Twitter, and it later turned out to be a fabrication.

8. Metadata could be a great legitimizing tool for citizen journalists.
While Twitter still can have issues like the above, metadata can be a way to make citizen journalism feel more legitimate. Thijm explained that citizen journalists in Venezuela have been shooting videos with metadata embedded in them, so that journalists seeing the videos can see when and where, exactly, the videos were made. This adds a new level of verification to such work.

9. Labels are fading.
Pariser spoke about how Upworthy doesn't consider itself a journalism site - "We consider ourselves curators of great stories. Once upon a time, a documentary was a film you saw in a movie theater, a news report was something you watched on 60 Minutes. Now all of these things are happening in the same place, and these labels and formats matter less than they ever have. The content isn't being described by the shape of the container anymore."