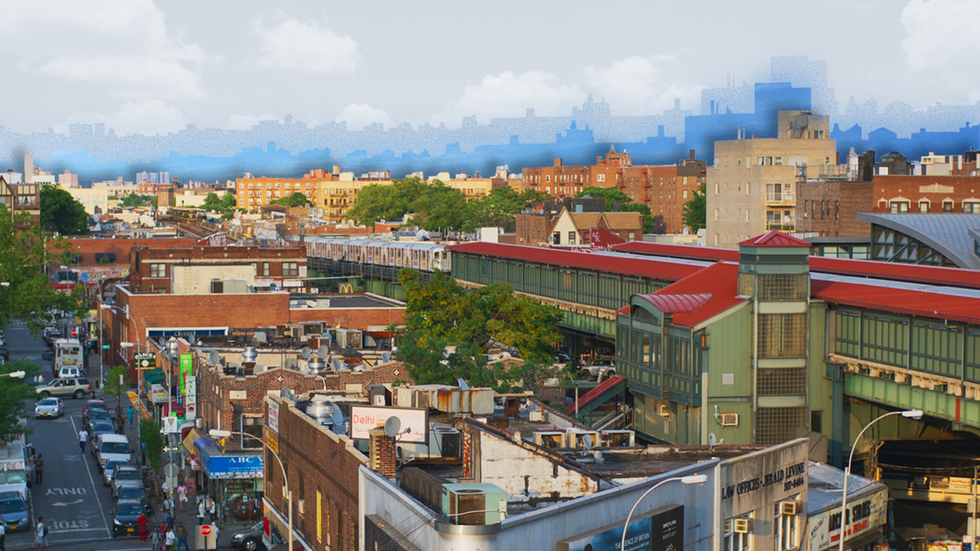 New York City has never been a stranger to cinematic treatment.

You can count to eternity the number of contemporary rom-coms that have set their attractive leads loose in the streets of New York and tried to trick us into believing that Jennifer Lopez is a hard-working chambermaid or that Cameron Diaz or Katherine Heigl or whoever is just another hopelessly single careerist. When these movies aim for diversity, you often get little more than Patrick Dempsey driving through Chinatown in his luxury convertible or sipping on Starbucks in some random dim sum parlor. Even the great moviemakers pose a bit of a problem. No one can ever accuse Woody Allen’s films of speaking for all New Yorkers, and certainly not for the multiethnic areas of the city that filmmakers like Spike Lee and Martin Scorsese always had a much better handle on.

To suggest that Frederick Wiseman devised his latest documentary In Jackson Heights, about the multitudinous goings-on within the titular Queens neighborhood, as an unvarnished corrective to the modern-day New York movie would be wildly naïve, not least because I’m sure Wiseman has never even heard the name “Katherine Heigl.” To merely mention Wiseman’s vastly superb In Jackson Heights in the same space as, uh, 27 Dresses seems improper, but it almost can’t be helped. Whether intended or not, In Jackson Heights is a monumental re-envisioning of how New York City can be captured on screen, as seen through the lens of Queens’ Jackson Heights, a neighborhood in which 167 languages are spoken and that is described early on as “the most diverse neighborhood in the world” by the area’s jolly local council member Daniel Dromm, an honor that might not literally be true, but which very much feels true after spending 190 minutes among its many inhabitants. Jackson Heights isn’t exactly a stranger to cinematic treatment itself. Films as disparate as The Usual Suspects, Random Hearts, Maria Full of Grace, and We Own the Night have all shot here in some capacity, although mainstream viewers might better recognize it as the home to ABC’s titular Ugly Betty. But the neighborhood’s remarkable plurality has never received the sort of extensive, immediate exploration that only a documentary doyen as keenly-attuned yet self-effacing as Wiseman. We’ve heard the phrase “New York is like a character in such-and-such movie” countless times, but we’ve also seen countless filmmakers, even great ones, irrationally linger on such stock sights as the Empire State Building, the Washington Square Arch, or Central Park, all in an effort to re-create the prologue of Allen’s Manhattan, as though merely focusing a camera on these cinematically clichéd landmarks will automatically conjure all of the city’s beauty, grandeur, and charm for mass consumption. What these filmmakers don’t understand is that it’s people who create character and that character itself is expressed through the personal experiences, distinctive idiosyncrasies, and minute particulars that comprise each and every human being, so long as directors (and audiences) are actually willing to seek them out and spend time among them.

I don’t know if there has ever been a more humanist filmmaker than Frederick Wiseman, who remains the most selfless documentarian in a medium whose most popular and prolific practitioners are often showboating. Wiseman, however, remains as hands-off with his subjects as he is with his audiences, which means no intertitles, no names, no narration, and no talking heads whatsoever. Centered around conversations, speeches, and interactions among the neighborhood’s various residents and workers, In Jackson Heights swells to contain these innumerable elements. It's a cinema of sidewalk discourse and communal engagement that takes as much invested interest in the frustrated efforts of four local government workers to smooth out the headache-inducing practice of school redistricting over the course of a standard weekday meeting as it does in a four-woman knitting group, whose freewheeling conversation veers from graveyard preservation to closeted male movie stars, leading to the priceless zinger, “Every actor I ever liked was gay… What does that say about me?” In a lesser director’s hands, these one-off moments would be the very definition of prosaic. In Wiseman’s, they are larger reflections of a fluctuating community struggling to protect itself while carrying out the customary routines of everyday city life. This is documentary filmmaking for the people, of the people, and about the people, concentrated on a pocket of New York City that plenty of New Yorkers might not even know exists.

By placing such lengthy emphasis on these people and their perspectives, Wiseman not only encourages multiple viewpoints, but simultaneously forces us to consider them in an attentively thoughtful way that movies so rarely ask of their audiences. Wiseman's inclusive, perfectly-timed edits incorporate everything and everyone, showing us not just the person who’s talking but also the people who are nodding, yawning, and murmuring their agreement, the surrounding populace who are just as indispensable to the bigger picture as the more vocal among them. Deliberate choices like these certainly help to steer our attention over the course of the film, but it is mainly the onscreen locals themselves who are left to shape our accumulating perceptions of Jackson Heights. Again, one is forced to wonder what magical directorial powers Wiseman possesses that allow him to put his subjects so at ease that nobody ever clams up or looks like they’re performing. He sincerely believes in these speakers and it’s as though they’re completely unaware that a man with a movie camera — who also happens to be one of the greatest documentarians, ever — is recording their every uninhibited word, gesture, and reaction with fly-on-the-wall invisibility in the public spaces they proudly call home.

Everyone expresses fondness and concern for Jackson Heights but the opinions voiced within are far too politically-affirmative for the film to ever be confused as some simple cinematic valentine. Urban gentrification and LGBTQ rights are the issues that take biggest precedence, and I have rarely seen either of these hot-button topics depicted with the level of calmly impassioned contemplation that each individual employs.

There are no generalizations. Everyone gets a chance to speak. People actually listen to one another and wait for others to complete their thoughts, and it’s this belief in candid yet composed conversation, this sense of person-to-person generosity, that allows the points themselves to take prominence, shedding light on Jackson Heights as an area that is currently on the precipice of losing its identity amid a long line of controversial, grand-scale changes. Several small-business owners appear throughout the film, railing against the duplicitous Business Improvement District (BID) that seeks to dupe Jackson Heights’ proprietors into giving up their businesses to make way for name-brand retailers like the GAPs and GNCs that have already sprung up around the neighborhood. One such owner, a middle-aged Latino man named Don Tobn, talks with two young, visibly weary activists about how a popular, multiethnic Jackson Heights shopping emporium that once housed 50 stores now contains only ten, as plans are under way to evict the remaining merchants, including Tobn himself, in order to turn the site into a Home Depot or Dunkin’ Donuts. During a late-night gathering with Tobn, the activists, and other shop-owners, another longtime resident talks intelligently at length about how the BID has no actual interest in helping them, but instead seeks to transform Jackson Heights into another Williamsburg by pricing locals out of their homes and businesses in order to make Queens into another barricaded borough for the wealthy. One by one, fellow members voice their agreement, deciding that they must rally together and direct their frustrations toward more productive ends, or at least some effective delaying tactics.

Moments like these allow In Jackson Heights to engross not only as relevant political cinema, but as political cinema that also has the power to educate and mobilize. What we see onscreen is a community trying to rescue itself, a mission that’s never felt more imperatively than in the many scenes involving Jackson Heights’ gay population. In one early dialogue, the members of SAGE, an elderly gay support group, patiently discuss plans to move out of the nearby Jewish Center that they have convened in for years, some of them coming from as far as the Bronx to a safe space wherein they feel some semblance of comfort and tradition. Later on, a Hispanic trans woman leads a group of LGBTQ protestors to a restaurant where she and a fellow trans companion were refused service. Together, they march through the same streets that Julio Rivera walked before he was tragically murdered 25 years ago in an infamous hate crime that has marked every initiative towards LGBTQ progress within the neighborhood. During Queens’ annual pride parade, New York’s divisive incumbent mayor Bill De Blasio becomes the first mayor to march in the parade before declaring that “Equality is spreading like wildfire across this country.” This statement is quickly contrasted — or at least called into question — by a later LGBTQ meeting, where the same woman who spearheaded the restaurant protest leads a brainstorming session about how to combat or at least evade increased police scrutiny at a local bar frequented by trans customers.

Wiseman envisions city life as democratic public forum, and it’s a lovely sight to actually see people speak with surety and conviction about issues they care about and to watch others take to these ideas and contribute their own. These scenes make for one of Wiseman’s most politically-motivated features, but it’s not an entirely polemical affair and these scenes are complemented by scattered moments that are waver between the uncomplicatedly light (musical interludes feature everyone from the Jackson Heights Orchestra to a busking, all-female mariachi band to a bemusing duo of percussionists performing in a laundromat) and the soberingly dark (in one sequence, elated soccer fans take to the streets to celebrate Colombia’s win, only to face aggressive police intervention). In Jackson Heights encompasses all of this and more, and it’s almost hard to believe this is all happening in New York, a city that only gets more generically narrow on the big screen and more exclusive in real life. This is a delightful, infuriating, and yet hopeful portrait of this reality, one that speaks specifically for Jackson Heights but, as the final shot will attest, stretches far beyond the neighborhood’s confines. It isn’t solely an excuse for the PBS subscribers among us to go to the movies, and I hope that more stateside audiences will take a chance on a film that has the courage to capture so many sides of American life.

I haven’t even gotten to the fascinatingly immersive intervals in which we briefly spend time in a series of local businesses, including a pet spa, a tattoo parlor, and various hair salons, not to mention a rowdy, late-night visit to a strobe-lit, stripper-friendly gay bar and a particularly stomach-turning tutorial at a halal chicken house. But I could also just as easily talk about the hilarious scene at a basement taxi driver school, in which prospective cabbies are taught the most hilariously bizarre way of remembering cardinal direction by an enthusiastically straight-faced instructor. Or Celia, a Mexican immigrant who relays her daughter’s harrowing struggle to get over the border in riveting but reserved tones to a community center room full of receptive Latino neighbors. Or the black trans woman who founded one of Jackson Heights’ many local LGBTQ groups because, as she puts it during a meeting, “I never fit in [to] any group in my life.”

In Jackson Heights, each perspective brings with it new value. Each experience unearths an unnoticed corner of life in a city that is so much bigger than too few of us are willing to see. Every person has something to say. And every story matters.