The first teaser for 'Gone Girl', David Fincher's hotly-anticipated adaptation of Gillian Flynn's zeitgeist-y novel about a man who faces a storm of suspicion after his wife mysteriously disappears. (The movie arrives October 3.) 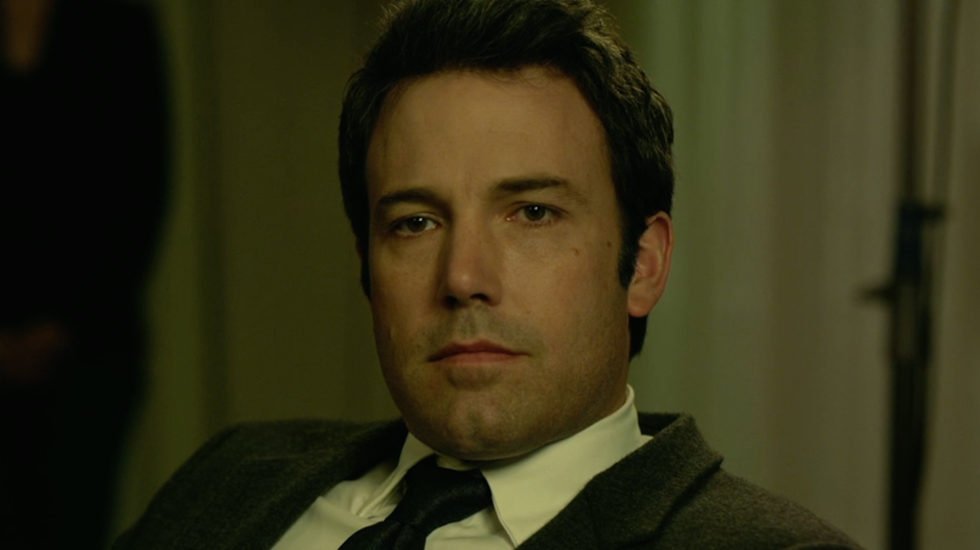 How Literal Is It? It's… ah… very hard to answer that question without spoiling certain things about the book. So if you haven't read it and don't want to know anything about what happens, then stop reading now. Seriously.

On one hand, this song choice seems bluntly ironic. After all, it's a romantic ballad that was recorded by Charles Aznavour in the 1970s, then covered by Elvis Costello for the Notting Hill soundtrack. Notting Hill!!! That's as sweet as it gets. And yes, the lyrics are about a mercurial woman, but ultimately, the singer wouldn't change her. That wistful affection seems directly at odds with images of a citywide manhunt and Ben Affleck declaring he's not a murderer.

But if you've read the novel, then you know Amy, the missing wife, isn't quite as "gone" as we initially suspect. From that perspective, it makes perfect sense for the trailer to use a romantic song in an ironic way. Since the entire plot hinges on the faultiness of first impressions, the musical irony is NOT so ironic, you know? It's actually a very literal choice to pair a sweet song with visuals that undercut the sentimental lyrics.That contradiction is the foundation of the book.

How Emotional Is it? No matter how much you know about the story, the song seems pretty damn eerie next to these scenes. That's hardly an original strategy for creating tension, but it still works.

How Definitive Is it? "She" sounds like any other ballad of sensitive yearning, and as I mentioned, it's not groundbreaking to use it this way. But I'd argue that's the point here. The story is very much about how banality serves as a smokescreen for evil.

Overall Trailer Tune Effectiveness: I love that the song can work in two different ways, depending on whether you've read the book. That alone makes it a brilliant choice. I don't think many people are going to run out and download the track or anything, but for those who can decipher it, it's delivering some very clever code. It makes me think the movie is going to be smart.