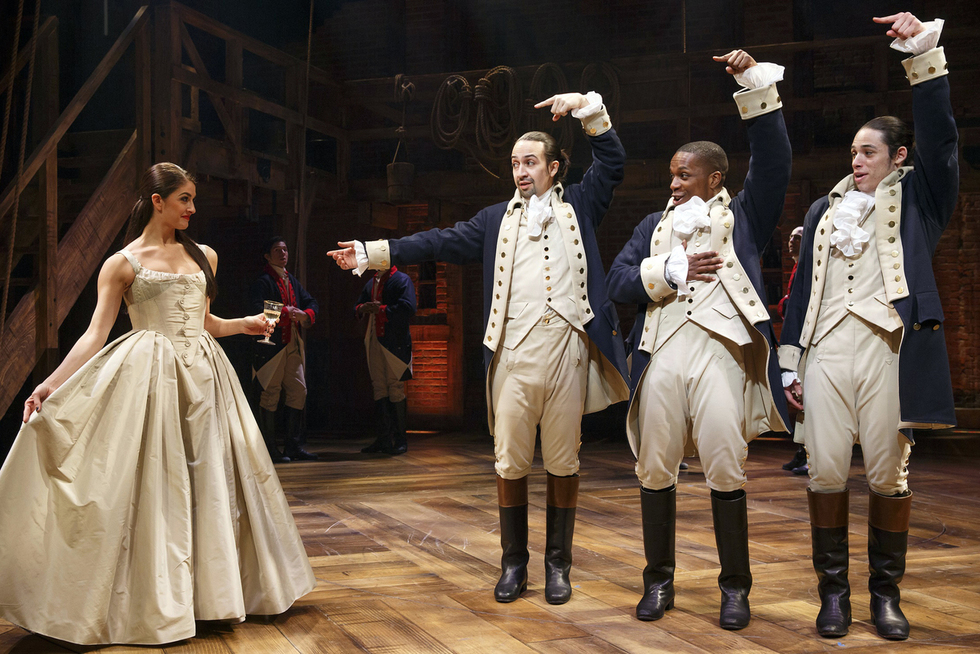 A scene from HAMILTON.

Some pairings are so obviously perfect that seem almost predestined for one another. Today brings news about one such no-brainer new match.

Billboard reports that Ahmir "Questlove" Thompson and Tariq "Black Thought" Trotter of the seminal live hip-hop band The Roots are executive producing the official cast album for Hamilton, the rap-heavy stage musical about Alexander Hamilton. Overseen by In the Heights composer Lin-Manuel Miranda, Hamilton has been gathering enthusiastically positive reviews during its preview run at New York City's Public Theater throughout 2015, and is set to officially open at the Richard Rodgers Theatre on August 6.

"Ten minutes into Hamilton, I was just so stunned. It was such a sucker punch," says Questlove. "[Hamilton] can be your introduction to hip-hop—on Broadway. And it’s a valid one. It’s a credible one."

Though the concept of hip-hop Alexander Hamilton story may sound goofy at first, it actually makes perfect sense. In a recent New York Times interview, Miranda broke down the parallels he’s drawn between Hamilton and rap go-getters like Jay Z; the light-bulb-above-the-head moment happened while Miranda was reading author Ron Chernow’s exhaustive 2004 biography about America's founding father. “By the second chapter, I was like, 'I know this guy,'" said Miranda. "Just the hustle and ambition it took to get him off the island—this is a guy who wrote his way out of his circumstances from the get-go. That is part and parcel with the hip-hop narrative: writing your way out of your circumstances, writing the future you want to see for yourself. This is a guy who wrote at 14, 'I wish there was a war.' It doesn’t get more hip-hop than that."

Hamilton (Original Broadway Cast Recording) will be available for preorders starting on August 7, via Atlantic Records, before its fall release.

To get a sense of what Hamilton's all about, take a look at this: