"We all make art about how the Internet is scary." Facehawk is an interactive music video that builds a 3D hawk from your own Facebook photos and statuses. We talked to Big Data band member Alan Wilkis and Facehawk creator Rajeev Basu about how this cool collaboration came about. 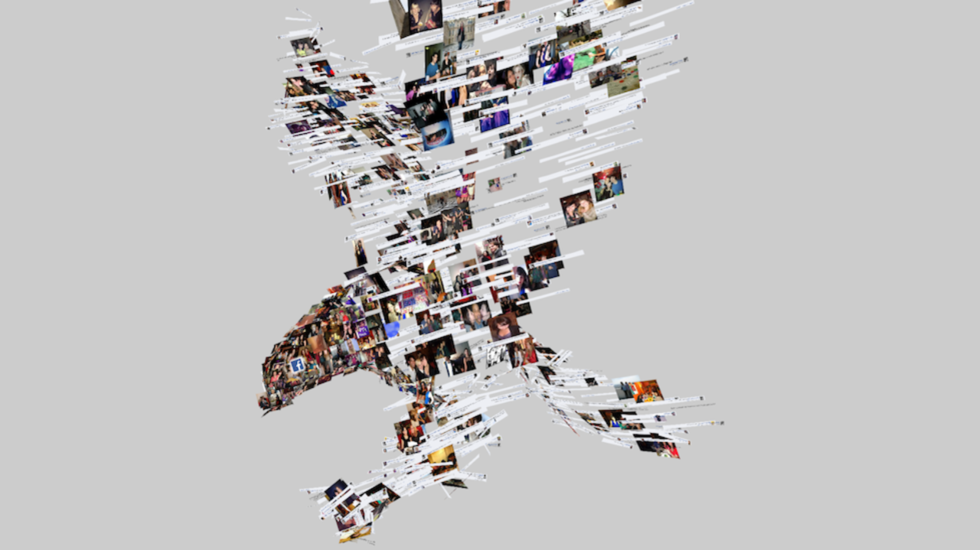 First things first: if you have a Facebook account and haven't experienced Facehawk yet, you should do it now (Google Chrome is the best browser to use).

Facehawk takes all your Facebook content and makes a 3D collage of it while Big Data's new song "Dangerous" plays in the background, making it far more than just a higher-level scrapbook or a run-of-the-mill music video. With the song choice and the photos building a bird of prey, could Facehawk have a message behind it? We talked to Big Data's Alan Wilkis and interactive web artist Rajeev Basu about how this creation came to be, and why. First up, Alan:

Tribeca: There is not only a connection between the song and the video, but even the name of the band, Big Data, seems to fit the theme of the project really well. So what inspired the band name?

Alan Wilkis: I'm sure many of your readers may already know, but for those that don't, "Big Data" is a very popular and overused tech term at the moment. It has to do with making sense out of the immeasurably large quantities of data that we are all collectively producing as we become more and more "plugged in." The band name first materialized when I was at my friend Jeff Hammerbacher's wedding last summer. Jeff is at the forefront of data science - he put in a few years helping to grow Facebook in its earlier days, before moving on to co-found his company, Cloudera. Jeff and I were talking at his wedding, and he mentioned the term "big data" in reference to his work. Daniel (my partner in the band) and I happened to be on the lookout for a name at the time, and it was so relevant to the kinds of lyrical themes we were already starting to tackle in our songs... also, we thought it sounded cool.

Tribeca: It says on your website that your music “explores the relationship between man and machine, and how the internet has reshaped the human experience”. What do you think is the biggest change the internet has caused? And how do you feel about it?

AW: Daniel and I feel constantly conflicted about it. On the one hand, technology constantly improves the quality of our lives, makes us more efficient while reducing production costs, and makes us more connected to each other in so many ways. And yet at the same time, our level of real interpersonal connection suffers, and we somehow become more alone. I can't think of the last time I was in a restaurant, for example, where there wasn't someone sitting with other people, staring down at their phone the entire time. I've certainly been guilty of it, myself. And I think on some level, we all hate that about ourselves... but no one's giving up their smartphones any time soon.

When you're watching Facehawk, and you see that status from several years ago float by your screen, you instantly remember where you were when you wrote it.

The other even more concerning evolution that's taking place is that we are making sacrifices to our privacy on a daily basis, and it's so clearly only going to get worse. I read this article recently, and I couldn't help but feel like we're already well into the age of Big Brother...

The great irony is that while I say all of these things, I simply could not imagine living without all of this technology, and I am in no way advocating that we give it up and go live in the woods. I guess with Big Data, we're just trying to document that this is all happening, for better or worse.

Tribeca: How did this collaboration with Jeeves begin? What about this project compelled you to make your song “Dangerous” the soundtrack?

AW: I met Jeeves through a mutual friend in February, and we all hung out one night. I didn't discover until the following day via his Facebook profile that Jeeves was secretly a brilliant, gifted, and utterly-deranged internet artist. There were links to high-profile interviews he had done about his Drones project and also Tumb.ly (which he recently won a Webby award for). After seeing those pieces, it was really a no-brainer - we all make art about how the Internet is scary.

So I immediately emailed him and suggested that we collaborate on something via our then-unreleased Big Data song, "Dangerous." A few days days later, he presented us with a multi-page pitch deck, with a fully-fleshed-out concept and sketches entitled, FACEHAWK. Daniel and I looked it over and were pretty much like, "yep."

It's nostalgic and sort of playful on the one hand, but it's also horribly unsettling and scary at the same time.

As far as going with "Dangerous," Daniel and I knew from the instant we wrote it that it was the single we were going to promote for the upcoming EP. After so many years of making music, you eventually just know when you hear it.

I like that the Internet is brutal. You have to have an amazing idea, or no one cares.

Tribeca: One of the lyrics that stuck out for me was “How could they know what I’ve been thinking, like they’re right inside my head”, and hearing that as the Facehawk assembles itself with personal photos and statuses is especially chilling. What is the main reaction you’re hoping to get from this project? Is there a message?

AW: To some extent, we don't like to hope for any one particular reaction, but I think the biggest intended takeaway from the song and Facehawk as a whole is that we often forget how much of our personal information we leave in the cloud. When you're watching Facehawk, and you see that status from several years ago float by your screen - "that movie was TERRIBLE!" - you instantly remember where you were when you wrote it. The memories come flooding back with each one. It's nostalgic and sort of playful on the one hand, but it's also horribly unsettling and scary at the same time.

AW: I won't say one way or the other, but we have a few fun things lined up over the next few months.

I have a number of virtual cameras set up that we move between through the video.

Tribeca: On your website, you describe yourself as an interactive artist. What inspired you to first start making interactive web art?

Rajeev Basu: I like that the Internet is brutal. You have to have an amazing idea, or no one cares.

Tribeca: Facehawk is different every time you play the video. How is this possible, and was it intentional?

RB: Yes. Everything is driven by code. Algorithms position the photos and statuses to form the hawk. I also have a number of virtual cameras set up that we move between through the video. Once again, it's algorithms that determine to a degree what exact angles we end up with in each shot. It's more fun this way.

Tribeca: What was the greatest challenge you faced in creating Facehawk?

RB: Getting thousands of facebook statuses and photos to fly around on your screen in 3D, without crashing your computer.

Tribeca: The fact that you chose a hawk over any other animal is interesting. What symbolic meaning does the hawk bear for you?

Tribeca: This isn’t the first project you made inspired by Facebook. There’s also “Status Update: The Movie”, where you animated Facebook statuses and created this surreal and funny short film. What fascinates you about Facebook the most? Are there facets of it that you still yearn to explore through your art? And, most importantly, how did you find all those Facebook statuses?

The Facebook statuses in "Status Update: The Movie" were all my own personal statuses. I used the archive tool to download every post I've ever made. I then went through every single one, thinking up ideas for stories. The best ones made it into the film.