"The subject of 'Visitors' is you watching the film." The illustrious American experimental filmmaker is releasing his first film in eleven years. We talked with Reggio about practicing slow filmmaking in this era of fast cuts. 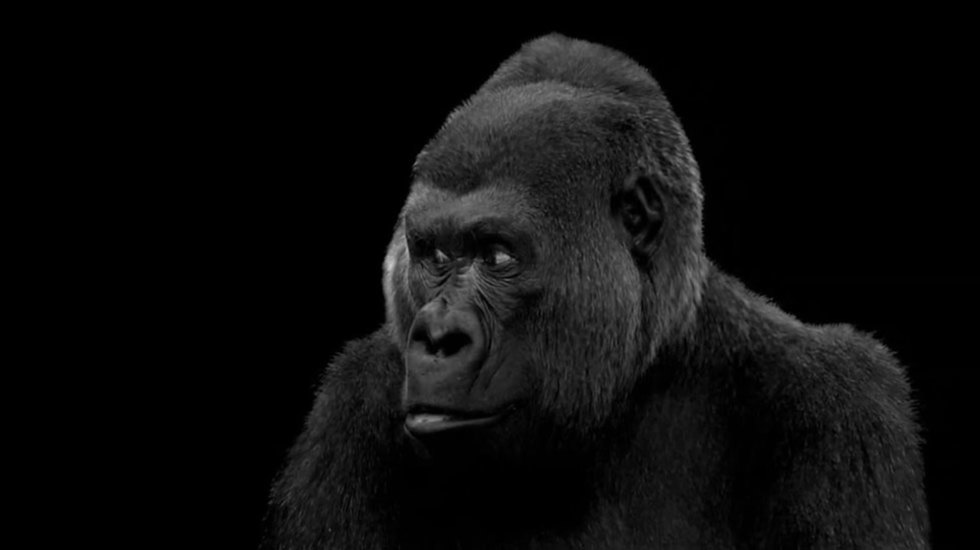 An iconic figure of modern experimental filmmaking, Godfrey Reggio is justifiably renowned for his avant-garde portraits of the manner in which much of contemporary human existence is lived out of rhythm. His seminal feature Koyaanisqatsi is notable for many reasons - among them, it launched Philip Glass's career doing movie scores - and that film's approach of suffusing the audience in time-lapse photography and dialogue-less drama has become Reggio's signature style.

Reggio is back in the film world with Visitors, his first feature in eleven years. Filled with a wall-to-wall score by Glass (and, naturally, no dialogue), and presented by Steven Soderbergh, the film preserves Reggio's idiosyncratic visual interests even as it reconsiders some of them. Working for the first time in black and white, the film - presented in 4K resolution - enables Reggio to portray life on Earth in a most alien manner. (A number of breathtaking shots are presented from the POV of the moon.) Filled with images of striking natural habitats and locations - a swamp, buildings in Reggio's native New Orleans - as well as highly stylized portraits (various human faces take up much of the film's running time), all set to music, Visitors is the sort of experimental cinema that builds a mesmerizing meditative state through pure emotion and sensation, rather than any kind of abstract narrative or intellectual thesis. I had the chance to speak with Reggio recently and discuss his craft.

The whole world is quick right now. If things can be slowed down they stay in memory longer.

Tribeca: In a world where attention spans are being constantly frittered away with new technological distractions, where do experimental films like yours, which require heightened concentration, fit in?

Godfrey Reggio: A very good question. I guess my own thought is that we are all on speed at rush hour, outrunning the future. The normal cut in a theatrical film is anywhere from 3 to 6 seconds. That means thousands of images in a film over a couple of hours. In Visitors the cuts come every 70-plus seconds. The point of view is that the stiller one can be the more open to their senses they become.  The whole world is quick right now. If things can be slowed down they stay in memory longer. So my approach functions so you can become immersed in the images. So the modus operandi for the direction of the film is moving still, the camera is moving almost inhumanly slowly.

The first building you saw is the one in New Orleans. We shot it like you would shoot Tom Cruise.

I try to slow things down to engage the audience in a slow motion event, which for some people is going to make them nervous. I tell people to leave their expectations at the door when they come into a film like this. This film is not meant to entertain or explain anything. It’s really meant to affect us. The subject of Visitors is you watching the film.  It’s an autodidactic format so the audience at once becomes the storyteller, the character, and the plot of the film.

Tribeca: I felt that way watching some of the shots of the tall building you have in the opening, with the clouds moving quickly behind it - so many different possible meanings, and I was the arbiter of them.

Godfrey Reggio: The landscapes are not shot as the backgrounds of the action. They are taken from the background and put into the foreground. So we rip out all the tradition of theatrical cinema where the story, the plot, the action is in the foreground. We take that out and the background becomes the star of the film. So the first building you saw is the one in New Orleans. We shot it like you would shoot Tom Cruise. I wanted that building to have its own voice. Now the voice you heard from that building could be vastly different of course from the voice the person sitting next to you saw. That’s the difference in this kind of film because its not telling you what to think, its giving you an image that can transubstantiate into a feeling, and all feelings are different for different people.

Tribeca: So the choice of the location is of utmost importance to you.

Godfrey Reggio: Oh definitely. It's like the casting director looking for the right actor to fulfill the screenplay of the movie. Without the right location we don’t have the right feeling we want to create. I’m from New Orleans and a lot of those locations were shot in New Orleans after Katrina. Those images have matured from images that looked like the chaos from the hurricane into images that looked like the ruins of modernity. Almost like a modern Pompeii. So I couldn’t have better sets to work with. They became characters and those are things I’ve always wanted to shoot but especially now in such a humiliated form. The tree in the film is the tree I played on as a child, so I was familiar with it. I always thought it had an enormous presence.

This film's desire is to provoke the audience, through beauty, to a truth that they might discover.

Tribeca: You mentioned that you expect different audience members to have various feelings from looking at the same image, and yet this confirms my feeling that the film was a very pure and personal work in some way - that you wanted to convey specific feelings to the audience. How would you reconcile those ideas?

Godfrey Reggio: My task is to create form. I think in art all meaning is in the form. So I give up the specificity of meaning being exactly this or that in order to provoke in you to your own response to it. So it’s cultivating something that has a life. If the film has a real life it is going to take on much more than what my colleagues and I put into it. In other words if the art is real it will overcome all of the mistakes, imperfections. Everything we intended to put into it. I don’t know if this is answering your question but I’m resisting answering what I want the audience to feel. I want to affect the audience but I know from being a former educator that you can’t tell someone how to think and feel. It’s up to them to grab the opportunity for themselves. So the film tries to raise questions that only the audience themselves can answer. What is the meaning of the Mona Lisa? It has as many meanings as there are people that see it. It is something that is truly up to the sensibility of those that engage it.

Godfrey Reggio: Well for example, take the gorilla we open the film with. We see gorillas all the time in nature photography, but if you take the background out of the image and shoot the gorilla against a black background - a blackground - then you change the whole dynamic of the relationship. Now the gorilla is looking at you face to face. This film's desire is to provoke the audience, through beauty, to a truth that they might discover. It’s a different way to discover, it’s trying to give art a presence in cinema that is beyond entertainment. Art as more poetic cinema where instead of words or texts it becomes texture.

It’s not based on a screenplay. It’s not based in logic. Its not linear. In all the films that I’ve been involved in every effort is made to create pictorial composition. It's creating a situation where a world we live in can actually start to speak to us. So how do we give the world a chance to speak to us is the modus operandi of the photography and the vision of the film. To give voice so the world can tell us something in a way we don’t have time to see it because it is so present, and it's only normal that we can’t see what is most present to us.

I think only one film had been projected in 4K at the time we started shooting.

Tribeca: You shot this film with the RED and are projecting it in 4K, the first time you've worked in this format. How has new technology affected your working process?

Godfrey Reggio: I’ve made every effort in every film I’ve done to always work with people who are more talented than I. This is a collaborative form. First of all since the film is a pictorial composition I want to use as much resolution as possible because that’s going to give us as much presences as possible of the image on the screen.  I think only one film had been projected in 4K at the time we started shooting.

We had to cobble together with the crew all kinds of technology to achieve this look. Fortunately I got to work with some of the prototype RED cameras. We were shooting a lot in 5K and reducing to 4K. It was all with the intention of making the images more visceral, more accessible on the screen. It puts it in another level of focus, which means that the image brings more presence to the screen.