Interview: Lake Bell Explores the Unique Voice-Over Subculture in Her Directorial Debut, 'In a World...'

"A friend of mine told me, you know your obsession with girls who talk like sexy babies? You have to put that into your script." Lake Bell sets her directorial debut in the strange world of voice-over acting, and reinvents a few Hollywood genres along the way. 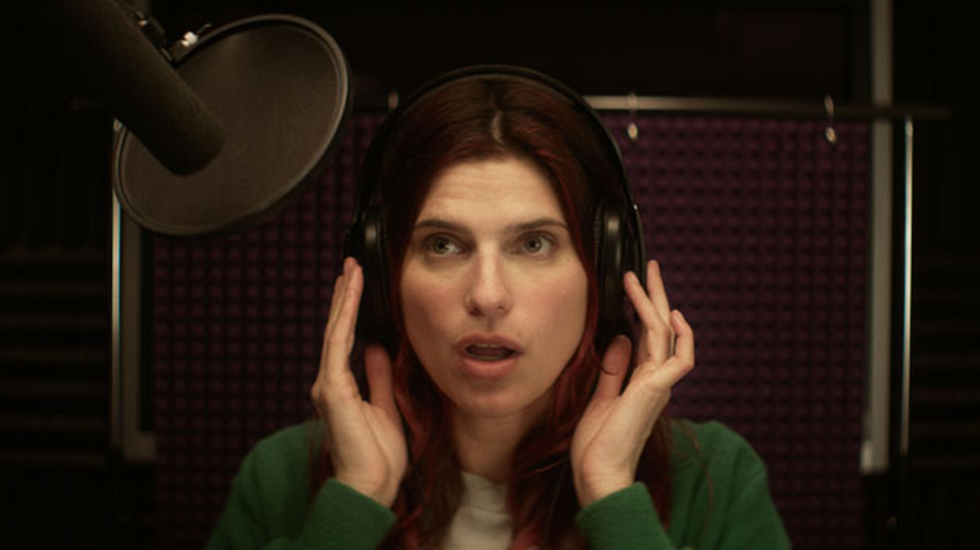 Filled with a specificity and vitality lacking in most Hollywood comedies, Lake Bell's directorial debut In A World... is the kind of film one looks at and thinks, "Ah yes - the way the studios used to make them!" Exploring a specific subculture as it sets its comedic plot machinations at work, In A World... is at times a screwball-ish comedy, a romantic comedy with depth, and a father-daughter drama - yet throughout, the film is buoyed by the freshness of its setting.

Following the travails of a young woman, Carol (Bell) whose father Sam (Fred Melamed, perfect) is a legend in the world of Hollywood voice-over trailers, as Carol tries to find success of her own in the very cliquey voice-over industry, the film exposes the fact that exploring an otherwise-unknown subculture is a fantastic way to add depth and interest to the various genres listed above.

That the film is a passion project for Bell - who wrote the picture in addition to her other duties - is readily apparent, as In A World...'s impassioned, totally specific interest in this niche, or, well, world of voice-over work is way too oddly endearing to have been concocted by a team of Hollywood writers.

As Bell provides us with a great peek into the hierarchies, petty spats and grudges, and general protocol of this highly specific sub-industry, she also gives us an intelligent picture about a young woman working to get out of her father's shadow. I had the chance to sit down with Bell recently to discuss her film.

Tribeca: Doing voice-over work is something that's interested you for a while. It's kind of like a supercharged kind of acting, right? Because you're not even constrained by your body in this kind of performance.

Lake Bell: You've just said what I normally say! I've always been attracted to it. I always knew I wanted to be an actor, but at a very young age I started to notice that I could do people's accents. I loved mimicry. I enjoyed voice and sound. It was kind of a dinner party trick with my family. Mimic him! Someone telling me, you have a good ear! So I started collecting accents like stamps. If I heard a new one I would perk up - you know, growing up in New York City, it's a petri dish of nationalities. You go on the bus and you're inundated with the coolest sounds. That parlayed itself into languages too - I was really into languages.

But yes, later, it became an interest that the blind voice was the most profound version of acting, because of its ability to not be judged by what you look like. You can be a disembodied voice that projects any nationality or person. You know, in the movie, there are scenes where Ken Marino is on the phone with his big Jewish agent, but that's actually me - I did that role. That's what's so wonderful about this.

At the end of the day, voice-over is fantasy-driven for the listener as well as the doer.

I also started to think about the omniscient voice, the voice of authority, these masses of disembodied voices telling you what to buy and what to think, what bank to trust with your money - these are important jobs, in a way. So the obsession really started from there and ended up here, where I wanted to take that on and add that on to your career. I wanted to start out as a voice-over actor. I went to drama school in England, and the most important part of it was the voice training, which had to do with body and breath, suturing all those elements together to have a connected sound and to be very vocally self-aware, which I am now. It was great, more an endurance test than anything else, but it really helped me with this movie.

A friend of mine told me, you know your obsession with girls who talk like sexy babies? You have to put that into your script.

I feel distracted by voices that are prevalent in our society now that have taken on that unsavory or somewhat diminutive tone, like the sexy-baby female voice. It's difficult for me to not hear that. A friend of mine told me, you know your obsession with girls who talk like sexy babies? You have to put that into your script. And you know, I had so much to say about that - though I didn't want to get up on a soapbox and bore people to tears with a message. The film is a comedy, but bubbling underneath there's hopefully a message.

Tribeca: The idea that the characters are trying to provide the voice of perfection is a really rich idea for comedy, because you have these characters who sound so perfect and project authority in their work, yet their lives are total messes. Was that contrast a big source of humor for you?

LB: Well, I'm interested in fallible characters. Writing comes from what you know and what you observe, and so to have these people taking on these fantasy voices and being so discombobulated in their own lives is great fodder for comedy. At the end of the day, voice-over is fantasy-driven for the listener as well as the doer.

You don't want anyone to be dying or freaking out on the set. So every department needs to be nurtured and cared for.

But yeah, that's a great observation. I loved - when I would go out and audition for voice-over - I would sit in a room with these cacophonous characters and think, this alone is compelling to me. Where do these people come from, what are their lives about? I never got the big jobs in voice-over. I wanted to. I thought I was going to be one of the great voice-over artists after drama school because we'd studied vocals so in depth, how to attack a dialect phonetically, all those things you see in the movie.

I had a demo and I came out to LA and tried to inject myself into that world, but it was so cliquey. I thought that was interesting - not only are they so specific with respect to what they do, but they're so specific as people. There's a real hierarchy there and it's not easily encroached on. It reminded me of my dad's business - he's in racecar driving. He owns racecar tracks and he's an amateur racer. I remember going as a little girl to the track and seeing the machismo, the egos there, and it's really a male-dominated sport. Being a little girl in that environment - or a woman - is a really interesting thing. I definitely used that world to fantasize about what it would be like to be one of the greats in this world.

Tribeca: You wrote, directed, and starred in the film, so I'm wondering how you compartmentalize those different parts of the creative process, through prep and production? And how all that affects your work with the other actors?

LB: Well, it's important to me that every department on the set feels comfortable - and all the actors. It requires an unbelievable amount of preparation and organization, making a film. It's so extensive. It started - unofficially - a year before I shot. I do maintain that moviemaking is fun and everyone should feel good. You don't want anyone to be dying or freaking out on the set. So every department needs to be nurtured and cared for, not just the cast. In terms of rehearsals - in the same way that I had a myriad of production meetings for my department heads, I did the same thing with cast. But cast, in a way, becomes something that happens more on the day.

We shot this in 20 days - we didn't have the luxury of rehearsing too much. We had a lot of dinners and lunches where I would say, hey, bring your scripts and we'll talk about characters and scenes. We did read-throughs, but I didn't have the time to overly rehearse it.

Some of these roles I wrote for specific people, so I knew it would fit in their mouth well. As for me, measuring my own performance, honoring it - you know, it was my own protagonist so I knew I would be doing myself a disservice if I let myself fail in that way - I took the script during prep for two weeks to an acting coach, Leslie Kahn, and I treated it as if someone else wrote it and I was working on a part that I'd gotten. I hadn't seen an acting coach in my time in LA - after drama school, the last thing you want to do is get into another intensive acting class - but for this I did it, because I wanted a space of objectivity.

I brought Michaela Watkins in with me in some of the sessions, so we could build that sisterly rapport. It was a lot of fun. There were a lot of moments where I didn't think of it as my script, but every once in a while I'd have an idea to change a line and write a note down. But that was very helpful. And I brought my friend Janicza Bravo - a great filmmaker - with me to some of the sessions with the acting coach, and she was kind of like my security blanket. That was a big help to me.