Interview: Paul Schrader on 'The Canyons' and Dying Film Culture

"The two hour format is under siege." We talked to the legendary director about the changing definition of film, Vimeo, 'Mad Men,' and the myth of the communal filmgoing experience. 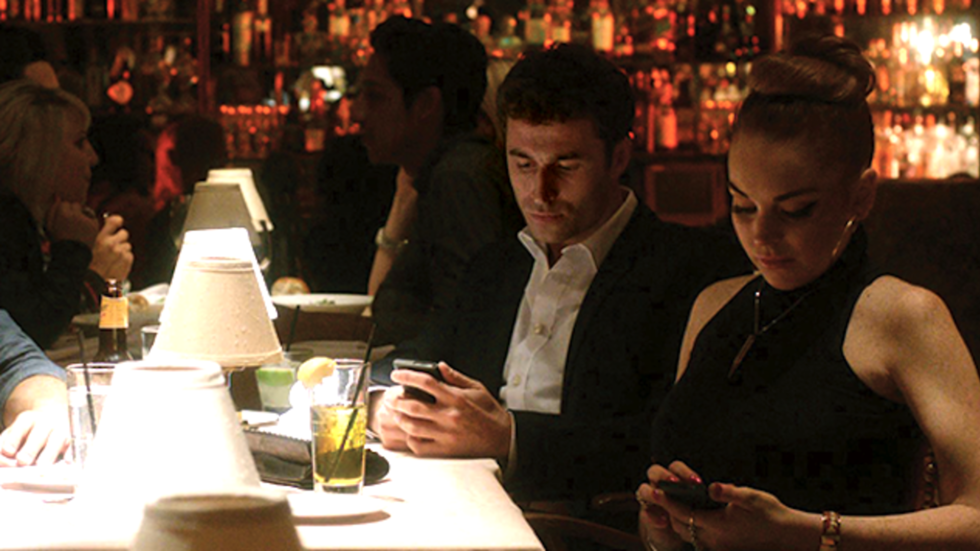 If there's anyone who's qualified to make a film about the film industry in Hollywood, it's Paul Schrader. The heralded helmer and scribe - perhaps forever best-known for penning Taxi Driver - is back with The Canyons, a thriller set within the Hollywood hills that features some of Schrader's most unexpected collaborations to date.

Writing the script? Bret Easton Ellis, whose lurid tales of LA living (novels Less Than Zero and Glamorama) are practically a subgenre unto themselves.

His leading lady? None other than Lindsay Lohan, a walking compendium of Hollywood trials and tribulations if there ever was one. And - oh yeah - opposite Lohan as the leading man? Porn star James Deen. This unusual combination of Hollywood insiders and outsiders is the perfect complement to The Canyons itself, which examines the fallout in the relationship between producer Christian (Deen) and his girlfriend Tara (Lohan) when each begins to suspect that they are cheating on one another. This being Bret Easton Ellis territory, increasing levels of debauchery soon follow. All the while, one thing becomes increasingly clear: these characters claim to want to be working on movies, but it seems they'd much rather just be living in them. I had the chance to speak recently with Schrader by phone about his film and its narrative's implications for the future of film culture.

These are people who are making a movie, but they don't really care that much about movies.

Tribeca: This is very much a thriller about Hollywood players, people trying to make films in Hollywood. How did your experiences in Hollywood inform the story?

Paul Schrader: I don't know if these people are in the film industry - I don't know what industry they're in. When I had my first table read I told the cast, this is a story about twentysomething Angelenos who got in line to see a movie. The theater closed but they stayed in line anyway, because they had nowhere else to go. These are people who are making a movie, but they don't really care that much about movies. It's a very attenuated kind of Hollywood.

Tribeca: Most industries, people in them are in them because of the industry. But it does seem like the movies often draw people who maybe don't really care about film itself very much. Why do you think that's the case?

PS: The gratification of the image, of stardom. One of the things that's occurring now culturally is that many of the attractions offered by films are now offered by other kinds of media. You don't have to be an actress anymore to make Kim Kardashian money.

How much difference is there between a five-minute thing on Vimeo and a thirteen hour season of The Killing? They're both movies.

Tribeca: Of course. And those great shots of the closed movie theaters that open the film really speak to the idea that the power of the medium is fading, from a cultural perspective.

PS: It's not so much cinema as it is the whole theatrical construct - the idea of the projected image in front of a crowd in a darkened room. That's going away. The two hour format is under siege. But the whole concept of audio-visual entertainment is expanding. How much difference is there between a five-minute thing on Vimeo and a thirteen hour season of The Killing? They're both movies.

This myth that people will always want to go out to the movies, they'll always want a communal experience - I don't know that that's necessarily true.

Tribeca: What are your personal thoughts on the reason the communal aspect of filmgoing is fading?

PS: Well, films were never communal just because people wanted a communal experience - it just happened to be the economic model that made the most sense. You could sell a lot of tickets and show the film at the same time to everyone. On a nickelodeon, of course, which predated movie theaters, only one person could watch the movie at a time. Nobody said, we want to sit in a hot room together! That's just how it was. But it doesn't have to be that way anymore. You know, this myth that people will always want to go out to the movies, they'll always want a communal experience - I don't know that that's necessarily true. If you want to watch the next episode of Mad Men, would you really prefer to watch it in a theater? I don't think so.

Tribeca: Do you see any value in that communal experience, or do you think it's a romanticized notion?

PS: In a certain environment there's a value - if you have kids. That's why kids movies are still so successful in theaters - parents like to take their kids and let them interact with the other kids, they can all interact. But with all of the screens available to us to watch media on, it's not necessarily the ideal experience anymore. I always prefer to go to an empty theater - I'd rather go to an eleven o'clock matinee than an eight o'clock show, so I don't have to be there with all those people. The seats are uncomfortable, when there's lots of people there you can't get up so easily, so I prefer to go with less people there.

Tribeca: You made quite a few headlines by having a Kickstarter for the film, and as of late high-profile projects doing Kickstarter has become trendier - Zach Braff and Spike Lee are among those to recently do Kickstarters for their films. How did you all decide to do that for The Canyons?

PS: I said to Bret, let's just make this movie ourselves - you write it, I'll direct it, we'll pay for it and we won't have to ask anybody's permission. That's how it started. Then one of our partners who came in suggested we do a Kickstarter. So we did that and we raised $170,000 from it. So we were able to make this really work as a micro-budget film. A part of the whole process of making this film, for me, was seeing if you could make a film on this small scale. Nothing on this film was done in the manner I had done it in the past.

Tribeca: Right. This is obviously a very small-budget picture for you. How did that affect your artistic options and decisions?

PS: Well, if you're made enough films you really know what you need money for and what you don't need money for. There's virtually nothing on the cutting-room floor for this film - you shoot straight to the bone. It ends up being kind of like a film co-op, since you're paying everybody the same rate, the actors are doing their own hair and make-up, no trailers. It really becomes a communal project. Everything in the film was designed to be as efficient as possible, with respect to the production. You know, I didn't think the film was going to have as much style as it does because I didn't think I had the money - but then we got that house, Christian and Tara's house, and we shot the first eight days there. There wasn't a bad angle in that house. After the first day, I said, I'm shooting Gigolo again, I can feel it, it's the same house!

Tribeca: What was your relationship with Bret Easton Ellis like in the making of the film? I'm curious because you're obviously a writer yourself, but you didn't write this film with Bret, he wrote it himself.

PS: Well, Bret was my partner in this venture. I deferred to him and respected the script. I did very little work with the script, because I really liked the voice as it was written.