Nick Gallo's official job title is Creative Producer of AdultSwim.com, but he's also the mastermind behind #HarrysBreakfastSpecial, a Vine series starring an unlikely hero. We talked to Nick about how Vine functions as an ideal medium for collaboration and connection. 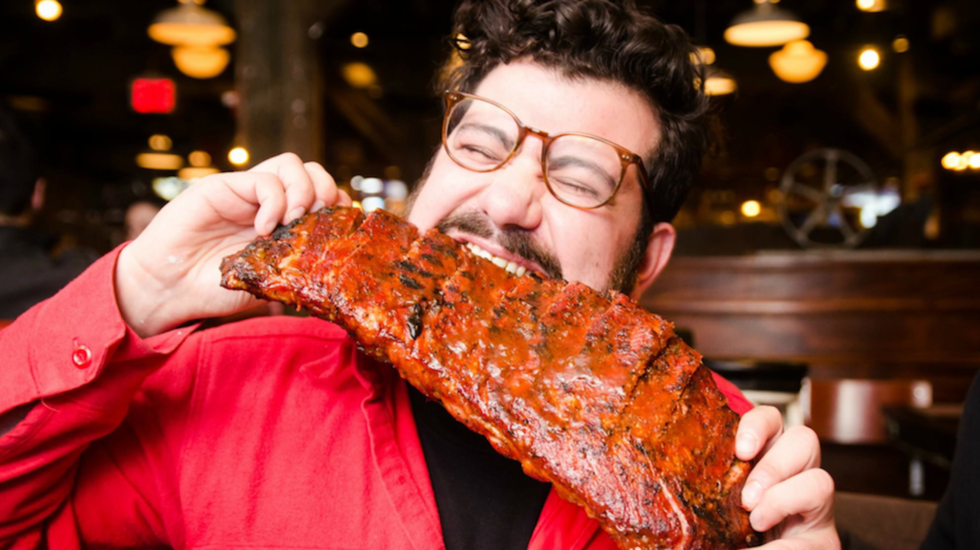 Nick Gallo was the graphics director of The Onion for 6 years, as well as graphics director for several New York Times best-selling books. He produced the film Big Fan starring Patton Oswalt, which was nominated for the Grand Jury prize at the 2009 Sundance Film Festival. Currently, he's the Creative Producer at adultswim.com.

In his spare time, though, Gallo is responsible for one of the most endearing Vine series out there and for one of the first episodic short films made entirely on Vine:

Tribeca: First things first: how did Harry's Breakfast Special come to be and how does Harry feel about his sudden internet popularity?

Nick Gallo: Harry's a wonderful hard working man: he's my breakfast guy. He gets there at 3:30 AM to claim his spot. Every morning he would ask me in his cute Greek accent, "Do you want to see a menu mister?" and it would make me smile. Coincidentally, I started going to his coffee cart during the toughest month I had this year and it brightened every morning -- it's pretty great that through Vine, Harry can brighten other people's mornings too. One video led to another until it became a daily routine. Don't get me wrong, I LOVE my job, but I'd wake up super excited to make the next Harry's Breakfast Special Vine.

I really enjoy collaborating with other people so curating special guests to order breakfast from Harry makes it even more fun for me. Harry loves making the breakfast Vines. There are even times that he makes me reshoot because he wasn't happy with his performance . His son and grandchildren are daily followers and on Sundays after family dinner they watch the new ones that were made that week.

The beauty is that you just get what you can get and then you're forced to move on.

Tribeca: You recently made "The Hunt", a 12-part Vine short film with Simply Sylvio. Why did you choose to make 12 Vines instead of one film, and what were the challenges (as well as creative benefits) you faced as a result?

NG: Normally, for Adult Swim, I shoot on a Sony EX3 with a big ol' lens. Shooting with the Vine app for me is a giant relief because of the limitations with using only the iPhone camera lens (unless you 're Jason Mante, because that man has gadgets for days!) If "The Hunt" wasn't shot on Vine, the setups would have been more intricate and I'm sure we would have gotten even more carried away. The beauty is that you just get what you can get and then you're forced to move on. We had eight shots listed out for a chase scene but we had no choice but to cut it in order to get that beautiful moment on the roof before the sun was fully set.

The most challenging setups were shooting on the subway platform because we had to run to the other side of the platform and wait for the next train to come to get the shot. Of course we didn't get it on the first try because some tourists were asking me a question and I accidentally tapped the screen and recorded by mistake.

One giant challenge that really ended up bring the series together as a whole was the music. We were really lucky to have Jason Mante drop by in the morning of the shoot, so we went through the shotlist with Jason and he cut together the audio loops for each individual shot and exported them as loops. Oh and let me not forget to mention the other challenge of Sylvio losing his glasses during the subway scene, being blind for the rest of the shoot and injuring himself after falling over a bench in his getup while we were shooting on the roof in the dark.

One thing I like to strive for is a shorter video that your audience will not only watch, but watch again and again.

Tribeca: You're the Creative Producer of adultswim.com, which often airs very short comedic/artistic clips, much like Vine. How do you think this mega-short format affects comedy and creativity, and do you think 6-second-length entertainment will become even more popular in the future?

NG: It's definitely apparent that due to the poisonous amounts of Internet exposure we get every day, people's attention spans have diminished. I don't think 6-second entertainment is the wave of the future but I do think that shorter-form videos will gain popularity. One thing I like to strive for is a shorter video that your audience will not only watch, but watch again and again. I'm really excited that this month we are going to start experimenting with 1 minute videos for our website. Although it is more challenging for the writers to come up with a developed character and a fleshed out story arc for a 60 second video, I think we are going to come out with some really funny, bizarre stuff.

Tribeca: You've collaborated with a good number of people on Vine -- Nicholas Megalis, Eugene Mirman, Megan Neuringer and Barkley the Pom. Is there anyone you haven't worked with yet but are dying to?

NG: You forgot to mention Robert De Niro... Robert De Niro was in one of my Vines you know! Well sort of, he wasn't willingly in it but he sure was in it. Anyways. Yes! I'd love to work with Warren Frost, Richard Dreyfuss, Peggy Lipton, Michael Horse, Harry Goaz, Catherine E. Coulson and Nick Spears.

Vine's function of just tapping the screen anywhere to film really does have Instagram beat.

NG: I would create a function that can recognize a crashed Vine which will allow you to re-upload it from your phone's camera roll. Also a function that recognizes people's color comments and automatically changes it to a randomized dad joke, for example: "The weather is here, wish you were beautiful."

NG: Vine's function of just tapping the screen anywhere to film really does have Instagram beat. Also, it was fun to watch a fresh, new, talented community of people from all over the place erupt out of the app. I'll upload videos here and there to Instagram but I'm not really impulsed to create original video content in the app. I just Googled MixBit and it looks insane...does that mean I'm old? Making a feature of curated footage from MixBit might be cool, who knows.

Tribeca: What is one piece of advice you´d give to beginner Viners?

Julia Pugachevsky is Tribeca's Vine Correspondent (among other things). Come back next Wednesday for another interview with an expert Vine user (and see last week's, with Peter Heacock).