In her first in-depth interview about her film ‘A Case of You,’ Kat Coiro spills on working with talents like Justin Long, Keir O’Donnell, Sam Rockwell, Brendan Fraser, and Peter Dinklage on the streets of NYC. 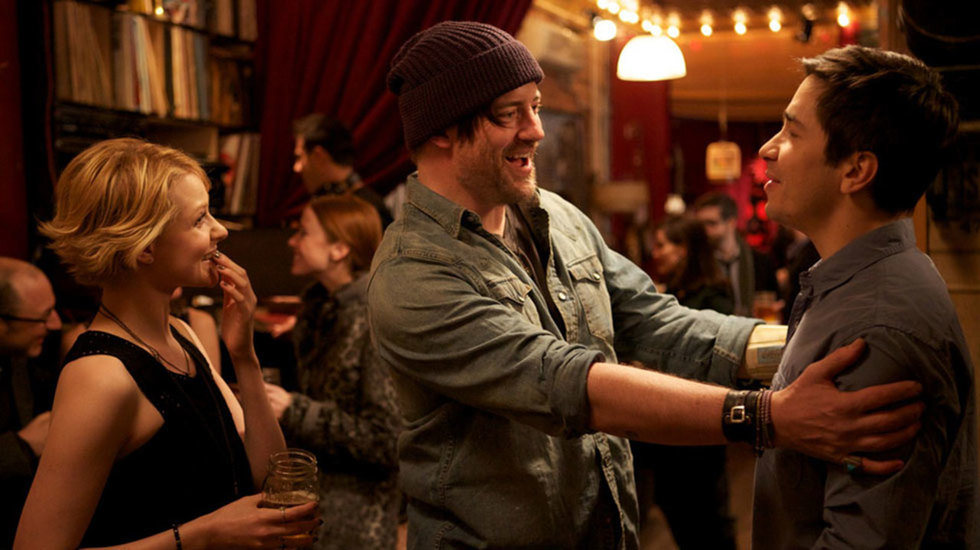 Tribeca: Tell us a little about A Case of You. What drew you to the project?

Kat Coiro: Producer Holly Wiersma and I had been looking to do a project together when she found this little gem of a script and brought it to me. Even before I read A Case Of You, I was hooked because it was named after my all-time favorite Joni Mitchell song (which, sadly, we didn’t end up getting the rights to). When I read the script I was impressed by its simplicity.

So often romantic comedies rely on unrealistic plot devices and over-the-top set pieces, whereas this script felt very sincere,  a reflection of the insecurities of everyone who has ever struggled to find and keep romantic love.

Tribeca: Justin Long, Christian Long and Keir O’Donnell wrote the script and played other roles (producers and acting for Justin and Keir) as well. Can you discuss your collaborative process with this talented trio?

KC: Stepping into Justin, Christian and Keir’s world was like entering a tight-knit family, not only because Justin and Christian are, literally, family, but because the guys worked on the script for years before I became involved and the story itself came from a very personal place for all three of them. Because of their enthusiasm for my feature debut L!fe Happens, they were very trusting and gracious and allowed me to bring my vision to their story.

I didn’t want them to change the script too much before production, although we did collaboratively add Brendan Fraser’s character to give Justin’s character Sam a little more reason for his insecurity. Once we were on-set, everything sailed smoothly. When Justin, Christian or Keir had input on what was going on in front of the camera, I asked them to speak directly to me so that I could balance all of their thoughts and concerns equally.

For the most part, we were always on the same page so it didn’t take much to honor everyone’s wishes and bring their vision, along with mine, to the screen. I feel grateful that this was my first experience directing a feature I didn’t write because I genuinely enjoyed collaborating with Justin, Christian and Keir and would do it again in a heartbeat.

Tribeca: I really appreciated the modern look at relationships that A Case of You provides. Everyone I know has stalked a potential lover at some point via facebook. In last year’s festival, the film that you directed, While We Were Here, was a black and white relationship drama that felt ageless. How did you prepare for directing this contemporary love story?

KC: Despite the obvious modernity of A Case Of You and the humorous “relateability” of internet stalking, I wanted to direct this story because of the timelessness of the struggle to find and secure love. Sam’s biggest obstacle is Sam, and I often feel that that is the case when it comes to love and romance. We, along with our baggage and insecurities, are our own worst enemies.

You have to find a new way to approach the city.

Tribeca: A Case of You is obviously a labor of love. From inception to print, how long did it take to get the film made?

KC: Justin, Christian and Keir worked on the script for about four years before I came on board. Once I became involved in the fall of 2011, it all came together stunningly quickly, and we were already prepping by January 2012. We finished filming last spring. Post production took a little longer than usual because one of our editors and all of our post-houses were in New York, while I am Los Angeles-based.

So from soup to nuts it took about five years, with my involvement taking place during about one and a half of those years. However, because I wrote/directed and produced my first two films – L!fe Happens and While We Were Here – The A Case Of You timeline, in comparison, seemed luxuriously quick.

Tribeca: You obviously have an amazing cast—Long, O’Donnell, Evan Rachel Wood, Busy Phillips, Brendan Fraser, Sienna Miller, Sam Rockwell, Peter Dinklage and Vince Vaughn. Can you talk about how they came to the project?

KO: I was blessed to begin the project with Long and O’Donnell attached. Having such high-caliber talent in place makes it much easier to go after other actors because, no matter how engaging a script is, actors want to know that they will be appearing on the screen in good company.

Tribeca: Your films are always so refreshing to watch because they feature such strong female characters. As a big fan of Evan Rachel Wood, I enjoyed seeing her play someone her age in a modern setting. What about her made her perfect for the role of Birdie Hazel?

Tribeca: Evan is one of my favorite actresses out there. I’m always surprised by how young she actually she is because sheis possessed of a depth and gravitas beyond her years. I believe this is why she is so often cast in intense period pieces. However, she has a great dry sense of humor and infectious enthusiasm, both of which really come across in her portrayal of Birdie Hazel.

From the outset I knew I needed to find an actress who was believably intimidating, someone who could conceivably make Sam, Justin’s character, re-create himself in her image. Evan is that girl. Birdie can dance, sing, and wisecrack; she’s genuinely nice, but she doesn’t suffer fools. She is romantic without being sappy, brimming with intelligence and confidence and a lust for life. She is articulate and unafraid of revealing her flaws, not to mention that she’s beautiful in a completely accessible and understated way.

Evan embodied this extraordinary character to a “T,” making us completely understand Sam’s fear and desire to be the best version of himself. I would love to work with Evan again. She is a great talent and a consummate professional.

Tribeca: New York City is almost like another character in A Case of You. What makes this city so filmable?

KC: The challenge in filming in New York, just like filming in Los Angeles, is that it’s been filmed a million times so you have to find a new way to approach the city. My favorite New York films  – basically anything Woody Allen – all feel very genuine, meaning the stories are taking place in the real neighborhoods you see on screen.

As anyone who has ever lived in New York knows, once you’ve been in the city a while, your neighborhood becomes your entire world. I tried to make this happen in A Case Of You by picking real Brooklyn neighborhoods and actually shooting in them. I’d like for people who live in Sam’s and Eliot’s neighborhood to recognize the coffee shops and streets and businesses.

Additionally, I feel as if New York films are often shot in the summertime or, if they are shot in the winter, they are portraying a snowy Christmasy New York that isn’t completely realistic. I wanted to show New York in the real, grey winter.

When it comes to love and romance, we are our own worst enemies.

Tribeca: What's the craziest thing (or "lightning strikes" moment) that happened during production (for better or worse)?

KC: When shooting small-budget movies, especially during very short timeframes, you can’t really leave much to chance. We prepped the movie down to the second and stuck to the script exactly. Of course, there are always unknown factors in making a movie that throw you off course or elevate a certain moment. I never like to talk about the worst moments because everyone on set is always striving to do their best, and talking about wardrobe malfunctions or location snafus – no matter how funny – inevitably throws someone under the bus.  So I will stick to the best.

We did a rehearsal of the romantic prop shop scene, which had always worked when reading the script, and suddenly we weren’t quite sure of its place was in the story. So Justin, Christian, Keir and Evan and I put our heads together and decided that the scene was about Sam’s fear of revealing personal details-- no matter how insignificant they may seem.

Being in the boy scouts till you are 18 or being in an a-cappella group in college shouldn’t be embarrassing once you are a fully grown man, but Sam holds on to these moments and blows them out of proportion in his mind to the point where he actually thinks that these facts will make Birdie dislike him. We had a great conversation and, with seconds to spare, the guys re-wrote the scene, and it’s now one of my favorite scenes in the film.

Tribeca: What makes A Case of You a Tribeca must-see?

A Case of You premieres Sunday, April 21, at the BMCC Tribeca PAC. For more information and additional showtimes, please visit our Film Guide listing.