Home » Tribeca News » Bugging Out: This Kickstarter Doc Explains Why Crickets Should Be Your New Favorite Snack
View All News

Bugging Out: This Kickstarter Doc Explains Why Crickets Should Be Your New Favorite Snack 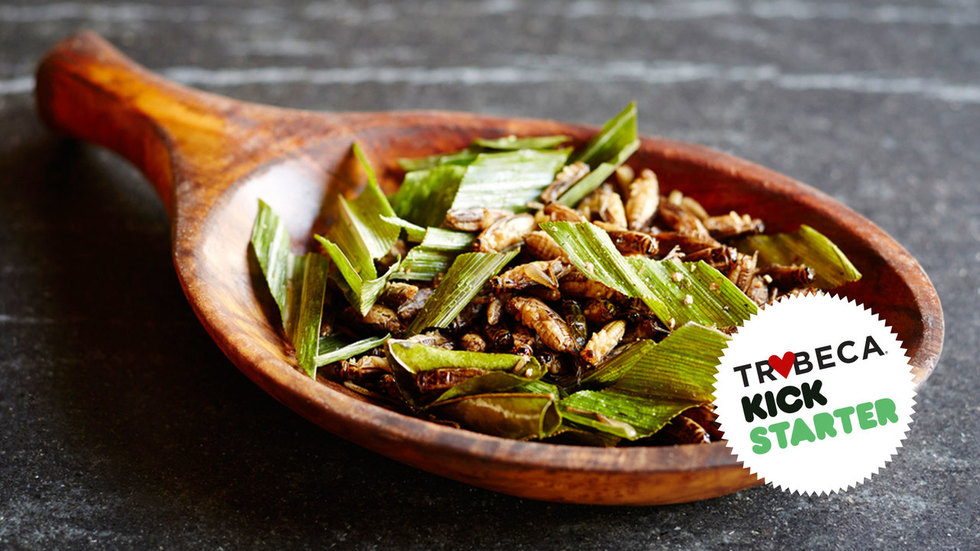 Loyal Shark Tank viewers will recall that one time the reality competition show made them feel simultaneously nauseous and intrigued. The date was April 21, 2014, and the guest hoping to convince Mark Cuban and company to empty their bank accounts was Pat Crowley, the CEO of Chapul Cricket Bars, a variation on energy bars packed with crunchy, edible bugs. Defying weak-stomached foodies everywhere, the Utah-based company, rooted in the taboo-crushing world of insect cuisine, secured $50,000 worth of Mark Cuban's cash.

Crowley was clearly onto something. Picture this: In a world that looks exactly like the one we're in right now, someone walks up to a hot dog stand and orders a delicious frankfurter with all of the available toppings, including ketchup, mustard, and…crickets. Yup, "crickets," as in those little noise-making bugs that seem to be everywhere except on your dinner plate. But there's a good chance that one day soon, crickets will be as common in people’s eating habits as breakfast cereal, vegetables, and salad dressing.

Seriously, think about something here before you gag or let out a resounding, "Eww!" How much food do people waste after any given meal? A gluttonous individual grabs more pieces of steak or chicken than their stomachs can handle, they leave the scraps on their plates, and thoughtlessly toss said plates into the garbage, which is in direct opposition to the costs and sustainability of animal-based food production. Eventually, there may not be anymore cows or pigs left for people to partially consume before disposing of the leftover bits. It's a dangerous cycle that needs to be addressed, and a growing number of dieticians and food distributors think they've found the solution: those aforementioned crickets.

See if this whets your taste buds—it's a tomato salad dish topped with crickets, from Dai Due, a restaurant in Austin, TX:

Kind of looks like some blackened Chinese noodles, huh? Well, according to everyone involved in The Gateway Bug, those long and stringy edible oddities are just as appetizing.

With their new independently made documentary The Gateway Bug, NYC-based filmmakers Johanna B. Kelly and Cameron Marshad will break down the benefits of working insects, particularly crickets, into our eating and cooking routines. It's part of a steadily mounting wave of momentum within the food industry dedicated to figuring out culinary options that are more sustainable and, frankly, safer. Last month, the International Agency for Research on Cancer revealed that the regular consumption of red meat is more closely related to cancer diagnoses than has been previously believed.

As Kelly and Marshad see it, America's "booming edible insect industry" is the best possible alternative. Before they're able to effectively spread the word, though, they need to raise a little over $19,000 by Wednesday, December 2. The funds will help to properly fund The Gateway Bug's editing, animation, musical score, and legal representation.

Change isn't always easy to accept, especially when it involves devouring creepy-crawlies, but in this case, it'd be wise to embrace the bugs. As The Gateway Bug's Kickstarter trailer lays out, it's tough to dispute the cricket’s nutritional and financial values. Before long, we'll all be ordering cricket-and-mushroom pizza pies, and our accompanying beverages will be laced with variants of Critter Bitters, the Brooklyn-based beverage supplement that promotes drinking toasted crickets.

If you're in NYC tonight, the filmmakers are hosting a free tasting event with options like "cricket tacos" and "cricket-infused cocktails" at Brooklyn's Donna Cocktail Club. Beginning at 7:30 p.m., the three-hour soirée will also include the first live screening of The Gateway Bug's trailer. More info here.

To support The Gateway Bug, head over to its Kickstarter page and donate. And once you've done that, check out (and back!) other Kickstarters we love here.