Margaret Brown on Documentary Complexity and 'The Great Invisible' 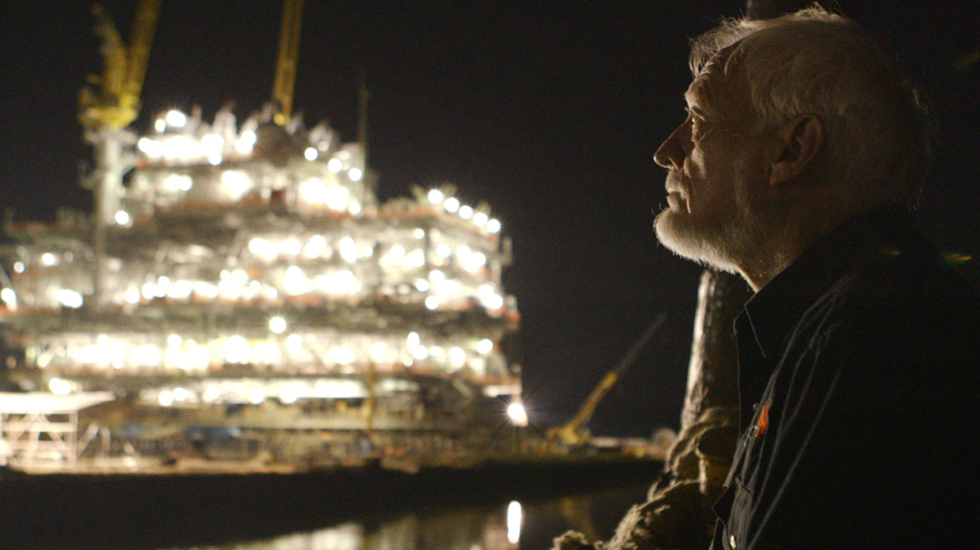 A winner of the Grand Jury Award for the Documentary Competition at this year's SXSW Film Festival, Margaret Brown's sprawling, complex new doc The Great Invisible, which Radius will release on October 29th, demonstrates that high-wire documentary filmmaking often involves some complex storytelling maneuvers. Starting as a look at the fallout of the Deepwater Horizon oil spill, Brown's doc grew increasingly in scope and size as it came to encompass a myriad series of effects of the crisis - the personal aftermaths for the survivors of the accident, as well as the families of the victims; the ecological toll taken upon the Gulf coast; and the larger political and economic ramifications for the oil industry and the petroleum-addicted American consumer.

Moving from the macro to the micro, the personal to the political, and everywhere in between, Brown's film is a real achievement in the tradition of documentary cinema that merges personal, emotional storytelling with broader political and social concerns. But that's an awful lot to carry in just one film, and it takes no small amount of skill to handle it deftly, as Brown has done. I had the chance to speak with her recently about her narrative approach and the ways she tackled her sophisticated subject matter.

I didn't want the film to necessarily happen in chronological order - I wanted it to have an emotional order.

Tribeca Film: You approached this story with a sophisticated angle. You didn't just take a birds-eye view of the oil industry, nor is it a simple recounting of the accident. It's a myriad look at the various causes and effects of this incidence. How did you approach the structure of the narrative?

Margaret Brown: The spill affected where I grew up, and I thought, when I started the movie, that it would be about what happened when the cameras left Alabama. A much smaller in scope film. About a year and a half in I started to get curious about the oil industry - how we're connected to how we fill up our cars. Where does oil come from? How are we connected to it? I wanted to make the film broader, and the way to do that was to make it a web of how all these threads are connected. It had to be a complex story.

Tribeca Film: As you worked through the weaving of that web, how did you go about constructing the narrative through-line of the film? The film flows so nicely as you alternate between various characters and points of view and concerns.

MB: It's a combination of logic and intuition, balancing it. I started editing with Geoffrey Richman, and then he got poached by Terrence Malick, so I started working with Robin Schwartz, and then Tyler Hubby edited toward the end. It was about what felt right with the flow, but also, I didn't want the film to necessarily happen in chronological order - I wanted it to have an emotional order. We had all these narratives and they all had their own arcs, and it was about how those arcs related to one another - it was a juggling act.

Tribeca Film: You mentioned you're from Alabama, an area that was affected by the spill. At what point did you decide you wanted to make a doc about this story?

MB: My dad started sending me pictures of their house, which was surrounded by the orange boom the fire department had put up to keep the oil from reaching the shore. No one knew what was going on, though. There's always hurricanes down there, but this was unprecedented. No one knew how to act, it was really scary for the locals. I remember leaving after the first shoot, flying back to New York and thinking about how much fuel it takes to fly a plane. I remember feeling, as we were taking off, much happier, and I realized how everyone in the area was so depressed about what was happening. Leaving, I felt kind of selfish, it was like I was escaping this region that was depressed, war-ravaged, almost, and I felt like I wanted to make a movie in the face of that. When my dad started sending me photos, I was working on a narrative about a surfer in South America, and I thought, at first, oh, I can't make a doc right now.

Tribeca Film: You have some compelling scenes with oil executives conversing, rather candidly, about how Americans view oil - how they get upset about drilling but how they complain about gas prices being too high as well. There are so many contradictions and such hypocrisy that the film illuminates. What was it like, excavating those contradictions in the American populace?

MB: There was a point where I realized, the oil industry is not the problem, the government is not the problem - we are the problem. We're asking for it! That's a simplistic way of looking at it, but it was revelatory to realize that it's convenient to hate the oil industry, but that doesn't take responsibility for our connection to it. But that's also obscured to the populace - I mean, when you go to a gas station, there's a screen, bright colors, you're distracted, you're not thinking. Gas station kiosks are built to look like ATMs because there are positive associations with ATMs, you're getting money, so they want you to feel good when you're getting gas. I wanted to uncover all that. We are connected to Deepwater Horizon, because we are demanding so much that people have to go out there and drill. And the oil industry would rather not make that connection, but I wanted to.

These companies, it's like they're just run by lawyers, they're not thinking about morality, only how to protect themselves.

Tribeca Film: That oil executive conversation is so striking and unexpected. How did that come to be a part of the film?

MB: I felt like there was a point in the filmmaking where I realized a scene like that was missing from the film. I felt like the guys who work in the industry would say surprising things. They wanted to bring cigars and drink whiskey, but if you can get beyond all that, what they're saying is not what you expect. They make some really good points. So it's interesting to see audiences respond to that - some people just see the stereotype and say, 'Those bastards!', but other people say, wow, I can't believe what they said, that makes sense. I think they have some valid points, we should listen.

Tribeca Film: The interview with Feinberg, the man in charge of administering the BP relief fund, is quite striking - at one point he characterizes the fund as a gift. How does that kind of a remark come about, you think? What are your thoughts on the lack of moral accountability from BP?

MB: Feinberg was working on behalf of BP, but for the record, he isn't representative of BP. I think later in the film, when he admits he made a mistake - I think he's one of the few people in the film who owns up to how he didn't deliver on what he said, in a film where there's such a lack of moral culpability. These companies, it's like they're just run by lawyers, they're not thinking about morality, only how to protect themselves. So it struck me that he owns up. But of course it's not a gift, and also, he said victims didn't need a lawyer, which proved to not be true - the claim forms were not simple.

Tribeca Film: How did you find the character of Roosevelt, who does provide something of a moral center to the film?

MB: It was great. We rode around in his truck for days on end. He was a character who could let us into this invisible world, the world of oyster workers and fishermen down by the Gulf of Mexico. He was an insider and we could look at it through his eyes. We were going to churches in the area, trying to find characters, because in the south that's where you meet people, and we found one church that had a food pantry, and someone told us to go out on a food run with Roosevelt. Right away, we realized he was a star. He said such profound and eloquent things, and he was so kind - though he was a bit salty too. A potent southern character.

The Great Invisible opens in select theaters on October 29.