Home » Tribeca News » Interview: Breakout Restaurateur Natalie Young on How the Downtown Project Made Her Small-Business Dreams a Reality
View All News

Interview: Breakout Restaurateur Natalie Young on How the Downtown Project Made Her Small-Business Dreams a Reality 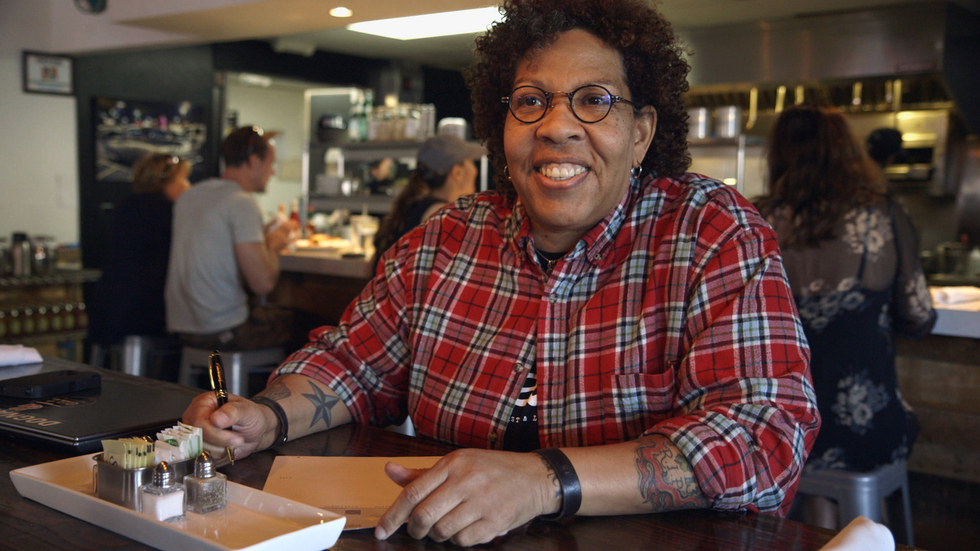 If you've watched even ten seconds of TV this year, you've likely seen Natalie Young. An award-winning Las Vegas chef and flourishing restaurant owner, Young has become one of the key faces of American Express' "Journey Never Stops" spots, which highlight individuals who have defeated underdog odds to achieve triumph in their respective careers and professions. Alongside such esteemed luminaries as Aretha Franklin, Mindy Kaling, and GoPro founder Nick Woodman, it is Young's success story that has resonated deepest of all.

Born in St. Louis, raised in Denver, and settled in Downtown Las Vegas, Young combatted addiction and discrimination as a gay African-American to open her own comfort food restaurant, EAT, with the help of The Downtown Project, a local initiative that tirelessly champions small businesses. In 2012, The Downtown Project began partnering with aspiring Vegas business owners to bring their lifelong passions to fruition and, in the process, revitalize their long-neglected downtown community.

In the new short film The Downtown Project, acclaimed documentarian Morgan Spurlock (Super Size Me) captured the grassroots organization in their early efforts to provide Downtown Vegas entrepreneurs like Young with the necessary funds and unconventional container spaces to begin their various businesses from the ground up. The result is a thriving community whose local pride is both infectious and inspiring, thanks in great part to the work of The Downtown Project, who have brought new attention and positive energy to a neighborhood that had been sorely lacking both since the 1950s.

In light of the film's digital release, we talked to Young about the unstoppable success of EAT, her Vegas neighborhood's stunning transformation, and how The Downtown Project and American Express have provided her with a once-impossible new platform for both personal and professional fulfillment and beautiful communal encouragement.

How did you become involved with The Downtown Project?

I was a customer at the Beat Coffee House, which is owned by Michael Cornthwaite. A few years ago, I had been planning to leave Vegas. And so I was having coffee with Michael one day and he was trying to convince me to stay and he asked me, “Well, what if you opened your own business?” And I was like, “That’s stupid! You’re stupid!” But he was serious, and so he introduced me to the Downtown Project and it proceeded from there.

How did EAT Cafe come into being? Did you know immediately that this was the type of restaurant you wanted to create?

I come from fine dining. And a lot of chefs will design a restaurant based on what their likes and their desires are but I really kind of looked at the community and thought about what was missing in downtown Las Vegas, and that was a great lunch and breakfast restaurant. So I thought, You know what, let me do a simple, approachable, small restaurant for the community.

Eat Cafe has been incredibly successful. Did you experience that immediately?

The first day we opened, I thought we’d do 150 [customers] total… I opened on a Saturday and I thought, Oh my goodness, if 150 people come down here, I’ll be so honored and so excited, and that will reach my goal. And 150 people came in two hours — on a Saturday, when downtown, I thought, would be dead. And so I had to close it down. I closed down at 12:00 in the afternoon because we were so busy. I stayed closed that Sunday and then, on Monday, we opened. And we've never looked back. And we've never been in the red. I paid Downtown Project’s loan back in a year and three months. And this year, we're trending to do $2 million. And we only seat 67.

When did American Express approach you about becoming one of the faces of its new commercial campaign?

It started with Morgan Spurlock’s documentary, which was sponsored by American Express two and a half years ago. Morgan followed me around for a month and a half, two months. And I didn’t think anything of it other than that it was fun. He’s an amazing person so it was a lot of fun to do. And then, some months ago, American Express sent me an email that said, "We have an opportunity for you. We'd like you to do a commercial." And I didn’t think anything of it. I just forwarded it to my office manager and then she ran out and said, “This is super serious!” And I looked at it again and thought, Oh my goodness! They had just sent an email with a contract and said, "Do you want to do it?" And I was like, “Hell yeah!” [Laughs.]

But I didn’t know what it was gonna be like. I just thought it was gonna be one of those cute little commercials about my restaurant. But then it became so much more important and took on such a much bigger message. I really had to pause for about sixty seconds and really think about if I wanted to expose myself to that degree on a national level. And then I thought, You know, if it helps one person, it's worth it.

Are you getting recognized a lot more lately?

I do get people who come into the restaurant and I get phone calls from all over the country. I get some amazing emails. But then, on the media side of it, the exposure of a positive message about recovery is very lacking. I think [American Express] is the first big company that’s sponsored something that supports the message of recovery. And it’s not about the trainwreck. As a country, we’re entertained by the tragedy of people’s addiction and we actually have watched people die of addiction on national TV. And so it’s really about having a positive message out there about how people can recover.

I’ve been sober for fourteen years now and on August 30th, it’ll be fifteen years. You can have long-term recovery and you can turn your life around. I get people who come in and they have either struggled with recovery or are in recovery, and so we’re already deeply connected because I know what that journey’s like. I constantly — I still tend to my recovery. You don’t just stop drinking and then you’re done. It’s daily maintenance.

"It's not about the trainwreck... it's really about having a positive message out there about how people can recover."

What has the Downtown Project’s revitalization of Downtown Las Vegas meant to you as a longtime resident of the area?

Oh my goodness. Like I said, I was gonna leave and now there’s such a sense of community. You know, I often tell people that if you’re coming here to get something, you might as well keep going. But if you’re coming here to give something and be a part of a community that's full of people who are trying to change and do good on the planet then it’s a great place to be. For me, what it’s meant — it’s changed my entire life. And it changed my life in a way that it gives me the ability to help other people. So it’s not like it’s changed my life and I just put all the money in the bank and go about my business. I get to have a platform to share my message about recovery and I get to help lots and lots of people.

You know, the corner where my restaurant is used to be barren. Nobody was there. And initially, when I opened the restaurant, I’d hear, "Nobody’s gonna walk over there! Nobody’s gonna walk over there!" And I can tell you today that there are people in suits, we have families on bikes, we have high school students, we have all walks of life now walking up and down the streets where three years ago there was no one. So the community’s definitely supportive and it’s definitely changing and it’s a really good, helpful, embracing, lovely experience.

What lessons do you hope other aspiring business owners take away from The Downtown Project and your own personal success?

My biggest thing is that there’s no magic pill. There’s literally just hard work and passion, and you still don’t have any promises of success. Initially, when I opened EAT, I just thought, If I can pay my rent and break even, I will be really, really happy and live happily ever after. And for whatever reason, it’s surpassed that. But everything else after that, that’s the icing, right? Paying my rent, helping some other people, and breaking even, that’s the cake. The icing is all the other stuff beyond it.

There’s no magic to being a small business owner. There are no guarantees. So it better be something that you love. I come to work seven days a week, unless I’m out of town, and my first year I worked 170 days straight. And I wouldn’t have it any other way. So I think people think that it’s gonna be instant success or that, you know, you’re gonna get a TV commercial, but I think that’s not the norm. You really have to love and commit to whatever it is you’re doing and stay authentic to whatever your vision is.