If You Love This Awards Season Movie, Try This Lesser-Known Indie Movie

From MAD MAX: FURY ROAD and WHITE GOD to ROOM and FELT, these cinematic pairings prove that 2015's independent cinema was just as impressively diversified as the year's more expensive and widely celebrated hits. 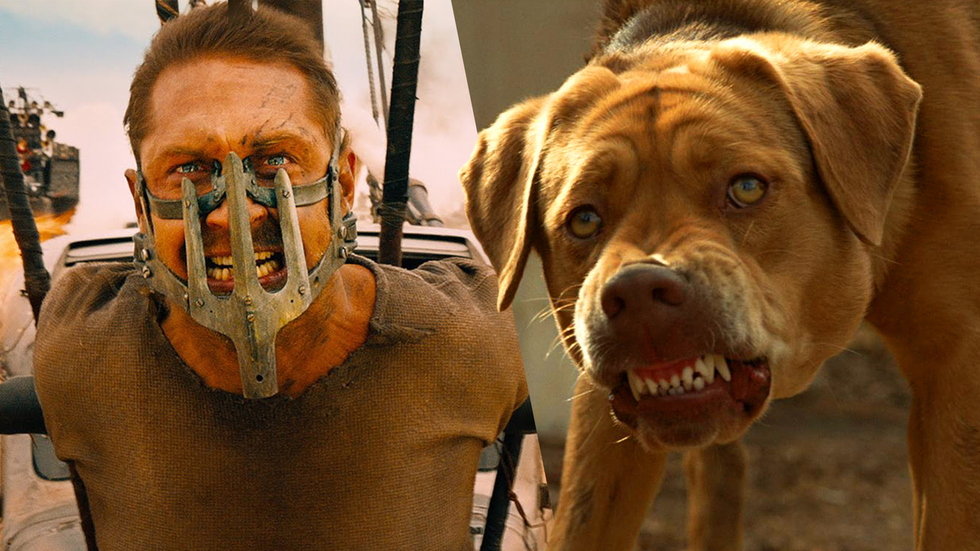 Movie blogs and cinephile chatter sound like broken records lately. If the conversations aren't about Daisy Ridley and Star Wars: The Force Awakens, they're about Todd Haynes' awards powerhouse Carol, Quentin Tarantino and The Hateful Eight, Leonardo DiCaprio's not-bear-rape in The Revenant, the steamrolling Best Picture frontrunner Spotlight, or the unlikely Best Picture contender (!) Mad Max: Fury Road. ("Unlikely" because it includes badass scenes like this, and this, and this.) Nothing else stands a chance.

That's a shame, too, since, despite what Bret Easton Ellis will tell you, 2015 was a superlative year for movies. Per usual, the many of the year's best cinematic achievements were independently made, and, as a result, have struggled to find the same-sized audiences as those glossier aforementioned Oscar contenders and box office smashes. What's especially interesting is that many of 2015's prestige movies call to mind specific indie movies, due to shared plot points, mirrored artistic ambitions, and/or actor pairings. And there's no reason why the smaller ones should keep being overshadowed.

As we head into the Christmas break, there's no better time to play catch-up with this year’s lesser-known gems, and to help you pick and choose which indie flicks to watch first, we've put together this guide to 2015's best indie movies based on your prestige, A-list movie preferences, complete with how you can watch each one right away.

Chief among the many things to love about Star Wars: The Force Awakens is Oscar Isaac's Poe Dameron, this generation's new Han Solo, but it’s also impossible not to leave a screening of the box office juggernaut while thinking about Domhnall Gleeson's fiery dictator-gone-H.A.M. monologue as the villainous General Hux. In Ex Machina, however, the actors' roles are reversed. Gleeson plays the well-meaning protagonist, a computer programmer/nebbish lured by charismatic yet devious tech CEO (played by Isaac) into a dangerous three-way relationship; the third party is a humanoid, A.I. robot with her own sneaky agenda (and played brilliantly by Alicia Vikander).

If the hugely entertaining Star Wars: The Force Awakens is popcorn sci-fi, the exceptional Ex Machina is genre caviar.

Ex Machina is available on DVD and Blu-ray.

If you love Carol, try…
The Duke of Burgundy

Technically, The Duke of Burgundy feels like a combination of Carol and the woefully inferior Fifty Shades of Grey. Like Todd Haynes' beautifully wrought drama about two women whose love for one another is problematic, English filmmaker Peter Strickland's The Duke of Burgundy focuses on two ladies with their own romantic headaches, albeit of the sadomasochistic and role-playing kind.


The Duke of Burgundy is available on DVD and Blu-ray and is also streaming on Netflix.

If you love The Revenant, try…
Backcountry

For one last time, no, Leonardo DiCaprio doesn't get raped by a bear in The Revenant, but Alejandro González Iñárritu's extremely intense film does feature one hell of a bear attack sequence. DiCaprio plays a fur trapper who has to survive alone in the wilderness after a massive grizzly mauls him, rips open his throat, and leaves him for dead. The scene itself is a remarkable achievement, shot in a single take and looking about as realistic as possible considering that it's actually just DiCaprio and some grade-A wirework and the best CGI that money can buy.

In Canadian filmmaker Adam MacDonald's Backcountry, though, the bear is real. MacDonald's brutal film is essentially about the romantic camping trip from Hell: After spending most of their getaway bickering, lovers Jenn (Missy Peregrym) and Alex (Jeff Roop) meet the worst possible relationship counselor: a grizzly bear that tears Jeff to shreds outside their tent, as Jenn helplessly watches. It's one of 2015 cinema's most outstanding sequences, with MacDonald bravely and magnificently shooting it with a live bear. You can imagine Iñárritu and DiCaprio watching it and shaking their heads in disbelief.

Backcountry is available on DVD and Blu-ray.

If you love Spotlight, try…
Call Me Lucky

At this point in the Oscar season, director Tom McCarthy's Spotlight is the movie to beat for Best Picture. The based-on-real-events journalistic drama follows the Boston Globe's "Spotlight" section's scrappy reporters as they expose a local Catholic church’s history of priest-on-little-boys pedophilia. That disturbing truth is also the backbone of Bobcat Goldthwait's excellent documentary Call Me Lucky, about stand-up comedian/political activist Barry Crimmins.

For its first half, Call Me Lucky is a straight bio flick, with Crimmins admirers like Marc Maron, Margaret Cho, and Patton Oswalt singing the controversial funnyman's praises, but Goldthwait's film eventually takes a hard left turn, delving into a traumatic experience from Crimmins' childhood that explains so much about his notoriously tough exterior as an adult. Spotlight is based on reality, but this doc is reality.

Call Me Lucky is available on DVD and Blu-ray and is also streaming on Netflix.

The only other 2015 movie to provoke that question so endlessly is Hungarian filmmaker Kornél Mundruczó's White God, which can be described as Rise of the Planet of the Canines. Its Caesar is Hagen, a mixed-breed dog who's abandoned by its owners, subjected to an excessive amount of cruelty, and gradually turns against the human race by leading a group of similarly abused dogs in a citywide revolt. Hagen is played by a pair of pooches named Bodie and Luke, and by "played" we mean legitimately acted without the help of any Marmaduke-like CGI or whatever other trickery you'd find in movies about dogs. Mundruczó somehow managed to film White God entirely by directing living, barking dogs, and it's incredibly executed.

White God is available on DVD and Blu-ray.

If you love Room, try…
Felt

Admittedly, this isn't an ideal holiday season double feature. Nothing says "Come and get me, Krampus!" like watching two movies about the ramifications of sexual abuse, but that doesn't negate the fact that both Lenny Abrahamson's Room and Jason Banker's Felt are masterfully told stories. They're just as punishing as they are skillful, and only one of them—the one that stars Brie Larson as a woman who escapes a four-walled den of rape and imprisonment—is an Oscar contender.

The other one, though, is a more visceral and unshakable experience. Similar to how the Safdie brothers made Heaven Knows What based on first-time actor Arielle Holmes' dark real-life past, Felt is a documentary-minded narrative feature centered around Amy Everson, a social misfit who makes X-rated felt puppets and escapes into sordid alter-egos to cope with sexual abuse that director/co-writer Banker never shows the audience or even puts into words.

One big reason why Felt will never receive the awards season punditry being thrust upon Room is its bleaker-than-bleak ending—whereas Room concludes with hope, Banker's film culminates into one of the year's most shocking and horrific movie scenes, a capper that establishes the previously genre-unspecific Felt as an indisputable psychological horror show.

Felt is available on DVD and is also streaming on Netflix.

If you love The Hateful Eight, try…
Bone Tomahawk

The Hateful Eight isn't Quentin Tarantino's best movie, but it's certainly the goriest one he's ever made. The blood cascades throughout the three-hour-long western's second half, in which the claustrophobic set-up, that of eight strangers trapped inside a haberdashery during a snowstorm, boils over into a parade of gunfire, exploding heads, and projectile vomiting where the puke is all crimson-colored and cartoonishly over-the-top.

Amazingly, though, The Hateful Eight isn't the year's most gruesome Old West flick. That wonderfully dubious honor goes to first-time filmmaker S. Craig Zahler's Bone Tomahawk, which also stars The Hateful Eight's Kurt Russell amongst a man-heavy ensemble. Bone Tomahawk combines western tropes with the kind of cannibal movie horror that Eli Roth recently attempted to resurrect with the heavily flawed The Green Inferno. One specific death scene sets Zahler's impressively hardcore genre exercise apart from The Hateful Eight or any other viscera-laden western. You'll know it when you see it; it'll make you want to vomit like one of Tarantino's Hateful Eight.

Bone Tomahawk is available on DVD and Blu-ray.

If you love Bridge of Spies, try…
Faults

On their surfaces, Steven Spielberg's Bridge of Spies and first-timer Riley Stearns' Faults couldn't seem any more different from one another. The former is a big Hollywood production that stars Tom Hanks as a lawyer who's out of his element while negotiating a prisoner exchange in Russia during the Cold War; the latter is a quirky little character study in which Leland Orser plays a down-and-out mind control expert whose bullshitting ways are tested when he's hired to "deprogram" a young woman (Mary Elizabeth Winstead) who's in a cult.

As those plot descriptions lay out, though, Bridge of Spies and Faults share the storytelling thread of in-over-his-head odds. And, don't tell Steven Spielberg or 2016 Tribeca Film Festival guest Tom Hanks, Stearns' movie is the better of the two. Faults is like the Coen brothers remaking Martha Marcy May Marlene, a funny, weird, unnerving, and wholly unique take on cults that stands as one of 2015's strongest directorial debuts.

Faults is available on DVD and Blu-ray and is also streaming on Netflix.