Home » Tribeca News » A Star Was Born: Before STAR WARS: THE FORCE AWAKENS, There Was ATTACK THE BLOCK
View All News

A Star Was Born: Before STAR WARS: THE FORCE AWAKENS, There Was ATTACK THE BLOCK 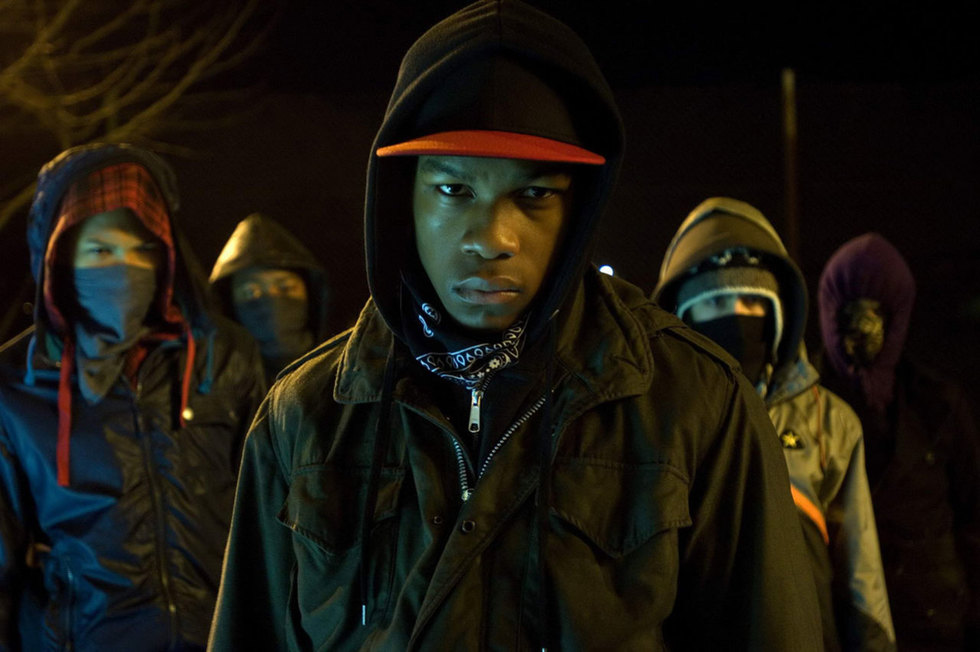 John Boyega in ATTACK THE BLOCK (2011). Photo by Screen Gems.

By the end of the year, John Boyega will be a household name. Everyone will be four years late.

Just in case you’ve recently emerged from a longstanding carbon-freeze and are behind the times, Boyega is one of the headliners in Star Wars: The Force Awakens, the not-so-little movie that, barring any unforeseen box office disasters, will dethrone all-time box office giant Avatar and leave local multiplex looking like a mini Comic-Con. In The Force Awakens, Boyega, 23, plays Stormtrooper turned hero Finn, this generation’s answer to Luke Skywalker in director/co-writer J.J. Abrams’ feverishly anticipated new edition to George Lucas' gargantuan sci-fi franchise. His face is the first one seen in the Star Wars: The Force Awakens' trailer that broke the Internet worse than Kim Kardashian's bare derriere last November.

Later tonight, Boyega's name will surely be at the top of Google’s searches following the ESPN Monday Night Football premiere of Star Wars: The Force Awakens' new trailer, much like his name did in April 2014 when news first broke that the London native had been cast as Abrams’ Mark Hamill. Most people didn't have a clue who he was at the time; last December, when the trailer's freight-train momentum was at a fever pitch, others still couldn't believe that a no-name black actor had been given the keys to Lucas’ kingdom. The less offensive haters commented online along the lines of, "He can’t be a Stormtrooper, they’re all white!"; the meaner skeptics wrote statements that don’t merit republishing here. Boyega, though, had this to say, via Instagram: "Isn't it crazy that Star Wars is actually happening? To whom it may concern… Get used to it. :)"

It was an admirably mature response from a neophyte who's on the precipice of achieving something incredibly special: giving young black movie lovers their very own relatable big-screen action hero. Michael B. Jordan tried and helplessly failed to do so in this summer's Fantastic Four debacle; Anthony Mackie has similarly put forth the effort as Marvel Studios’ Falcon yet has been relegated to either S.H.I.E.L.D. sidekick (Captain America: The Winter Soldier) or doorman (Ant-Man) status; and Chadwick Boseman has to wait until 2018 before he’s the top-liner in Black Panther, since he’ll only be third- or fourth-fiddle in next year’s overcrowded Captain America: Civil War, which will feature pretty much every Marvel character aside from Hellcow or The Asbestos Lady battling for screen time.

Star Wars should breathe easy, too—Boyega has already proven himself. Finn will actually be Boyega's second time playing the hero. The first time he literally saved the day in a movie, he also figuratively killed everything else.

Originally released in July 2011, Attack the Block should've been an indie sensation. Writer-director, and popular English comedian/radio host, Joe Cornish's minimally budgeted but impressively gigantic-looking film premiered at that year's SXSW Film Festival to rapturous praise. With its mostly unknown cast, Attack the Block caught festival-goers off guard; Boyega, for his part, had been an emerging stage actor in England when Cornish discovered him and gave him the film’s meatiest role, "Moses," the leader of a five South London street youths.

Between SXSW and its theatrical debut, Attack the Block received overwhelmingly positive reviews. But the film fizzled once it opened, due to a non-existent marketing campaign. Finding a theater that had Attack the Block was tougher than finding a Star Wars fan who doesn’t want to asphyxiate Jar Jar Binks. That lack of visibility and accessibility was a crime against genre cinema. Cornish’s ambitious and full-throttle hybrid of The Goonies, Die Hard, and Invaders from Mars is engineered for packed-house viewing, and Boyega's performance is eye-opening in the same ways that Chris Pine's was in J.J. Abrams' Star Trek, or Chris Hemsworth's was in Thor.

Unfortunately, Attack the Block is also extremely British and laden with British street slang that's often difficult to follow. When Attack the Block was released, there were conversations about giving the English film, sigh, English subtitles. Which was, and still is, idiotic, yet perhaps also speaks to why the film didn't catch on in the states. For the most part, American audiences don't want to have to decipher through an unfamiliar dialect while watching explosions and alien attacks. Had they given Attack the Block a real chance, stateside viewers would’ve fallen in love with a deeply layered film that, beneath its glossy visuals, hip-hop-inspired score, and firecracker comedy, has as much to say about inner city life as it does how to most efficiently slay bloodthirsty extra-terrestrials with Samurai swords.

Cornish wastes little time getting to the film’s run-and-gun material. Attack the Block opens with a young white nurse named Sam (Jodie Whittaker) walking home at night to her new apartment, or "flat," inside a South London project building. Five young hoodlums, clad in hoodies and with bandanas covering their faces, corner her on an empty street; Moses (Boyega) pulls out a switchblade and forces Sam to give him her money. But then something large zooms by them and crashes into a nearby car, having just been shot down from the sky with a cannonball-like force. Sam flees; Moses cautiously investigates what’s inside the vehicle and, along with his four buddies, unintentionally causes a citywide alien invasion. Attack the Block’s E.T.'s are nothing else like anything that’s been seen in sci-fi cinema—repeatedly described as "ugly, bear-creature motherfuckers," they’re the blackest black, move rapidly on all fours like gorillas, and have neon-blue-glowing teeth that rip through flesh like Freddy Krueger's razor fingers.

The brilliance of Attack the Block lies in how Cornish subverts its characters societal roles. He smartly gives you a bad first impression of Moses and his pals, presenting them as villainous bad apples accosting the pretty and innocent young lady, but that alien crashing into the car represents Cornish's immediate destruction of all familiar archetypes and prejudices. It turns Moses into the film’s unlikely hero, with his four friends functioning as his diversely minded sidekicks, including the prerequisite comic relief kid, Pest (Alex Esmail). Shortly after their initial encounter, Moses and Sam reluctantly become allies, and it’s soon up to Moses to save Sam's life, which he does, more than once. The scary-looking young black teenager turn out to be only person brave enough to save the day.

Like a young Snake Plissken who's yet to realize his inherent coolness, Moses leads the pack with unwavering heroism. He’s a fearless, natural born leader who, before Attack the Block’s events, hadn't been able to reach his full potential due to society’s pigeonholing him as a delinquent. Cornish doesn't make Moses out to be a saint, though; in one of the film's best scenes, one of the boys' female friends chastises Moses after hearing about how he mugged Sam earlier in the night. You can see the regret in his eyes just as clearly as you can see the disappointment in hers. Moses is unquestionably flawed, but he’s also only 15 years old.

There's an even stronger moment of characterization right before Attack the Block’s climax, where Sam walks through Moses' ramshackle apartment and learns that he lives with his never-there uncle in near-squalor and sleeps underneath superhero bed-sheets. Despite his tough-guy veneer, Moses is just a kid. He and his peers are products of the low-income, zero-opportunity environment in which they live, and it takes an alien invasion of all things to show the world what they're capable of, and why they matter. Moses' evolution as the result of decimating vicious bear-like aliens epitomizes that.

Boyega's performance, so revelatory back in 2011, remains exceptional. It's all internalized emotion. He plays the character with great restraint, giving the stoic Moses a quietly forceful presence that makes it easily understandable why his friends so readily follow his lead. Boyega, who was 19 when Attack the Block opened, perfectly balances Moses' physicality and vulnerability; in a perfect world, Charlize Theron would credit his performance as an inspiration for her Mad Max: Fury Road work. Moses and Imperator Furiosa are cut from the same rigid yet delicate cloth.

When Moses watches friends get slaughtered by the aliens, you see that he's still just a terrified young boy, no matter how many creatures he kills for survival, and when it comes time to do fight those otherworldly enemies, Boyega looks the part of an action star. Cornish, aware of Boyega's potential for icon status, shoots Moses' end-game battle against the aliens in slo-mo. The sequence is dynamite: with an amped-up soundtrack blaring, Moses leads a small army of "ugly, bear-creature motherfuckers" down one of the apartment building's hallways while holding a sword and with a dead intergalactic ghoul strapped to his back.

Attack the Block ends with Moses having saved the world but also still feeling the effects of being a young black teenager. Even though they'd probably be dead if not for him, the cops cuff Moses and stick him in their van. Outside, on the crowded, mob-like street, Sam and hundreds of others loudly and proudly chant his name: "Moses! Moses! Moses!"

Many who saw Attack the Block in 2011 had a feeling that Boyega's name would eventually get the same treatment. After December 18, once Star Wars: The Force Awakens has been unveiled to ravenous R2-D2 loyalists and plastic lightsaber owners all around the country, that may finally happen. Better late than never.