SICARIO Faces Backlash and a Boycott from Residents of Ciudad Juárez 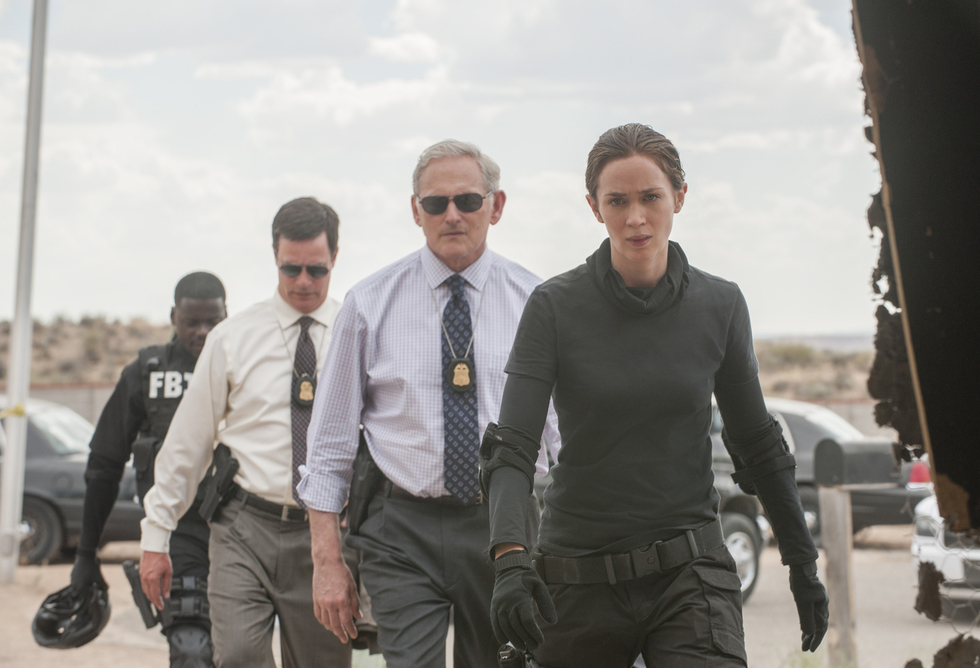 There are a number of things about Sicario, Denis Villeneuve's latest, critically-acclaimed thriller about the U.S.-Mexico drug wars, that are extremely hard to deny. From Roger Deakins' startlingly stygian cinematography to Johan Johansson's slinking score, it's almost inconceivably well-made. It also features a savvily-cast ensemble led by an excellent, take-charge star turn from the redoubtable Emily Blunt, who, between this and Edge of Tomorrow, is rapidly becoming the contemporary action heroine we so direly needed. Blunt works wonders as Kate Mercer, the fast-rising FBI agent who finds herself way over head when she is recruited for a shady government task force, led by Josh Brolin and the great Benicio Del Toro, that has been tasked with taking down one of Mexico's top drug lords in Ciudad Juárez.

But four weeks into its gradually expanding release, Sicario is facing severe backlash from the international community that should have mattered first and foremost: the residents of Juárez.

Villeneuve, screenwriter Taylor Sheridan, and the other filmmakers behind Sicario, whose jolting violence and moral evasiveness polarized critics when it premiered earlier this year at Cannes, have drawn accusations from Juárez's unsettled citizens of trying to profit from the onslaught of narco-violence that typified the border town's darkest days. Between 2008 and 2013, roughly 10,000 lives were claimed by cartel-related violence, and the number of disappeared persons reaches into the thousands. Juárez Mayor Enrique Serrano, who has joined the growing number of locals who are calling for a boycott of the movie, tells Fusion, "This film tries to portray a situation of violence as if it were the current reality of the city, which is not the case."

He's got a point. Sheridan's screenplay never makes explicit mention of the year in which the plot transpires, basically (and perhaps deliberately) leaving it up to audience members to presume that these events are all occurring in the present-day.

Despite the film's mostly positive critical reception (it's being hailed by many as one of the year's best) and considerable commercial success (it's continually been playing to packed theaters every weekend since it opened), Sicario has gained its fair share of detractors stateside as well, from Reverse Shot's Adam Nayman to Noah Tsika, an Assistant Professor of Media Studies at Queens College, CUNY, who detailed his frustrations with Villeneuve's latest crime drama on Twitter:

@NicksFlickPicks To me, it evokes HEART OF DARKNESS and takes an almost entomological view of Mexicans.
— Noah Tsika (@NoahTsika) September 27, 2015

Tsika's Heart of Darkness invocation isn't as off-base as some may allege. Sicario is a bonafide Dante's Inferno of narco-violence and often necessarily so, but one has to question the creative license and moral responsibility that have been taken by Villeneuve, the quickly rising filmmaker behind such effectively taut enterprises as Prisoners and Enemy who is attached to an upcoming Blade Runner reboot and is — not unimportantly — a white French-Canadian. After all, aside from Del Toro's suspiciously guarded hired hand, the character who is arguably the film's second most prominent Mexican figure is a crooked police officer-turned-mule played by The Americans' Maximiliano Hernández whose briefly-glimpsed home life is mostly characterized by eating eggs for breakfast with his adoring young son, while his blank-faced wife watches with worried detachment. Admirably economical storytelling or overly simplistic broad strokes? It's not always easy to decide.

Of course, cartel dramas are hardly a new genre, with films ranging from Steven Soderbergh's Traffic and Joshua Marston's Maria Full of Grace to Matthew Heineman's 2015 documentary Cartel Land and Amat Escalante's disturbing Mexican drama Heli. But the difference between these films and Sicario, expertly crafted though it may be, is that they all take an active and acute interest in the lives of its Mexican characters. By comparison, Sicario, which generally fares better (and digs deeper) when alluding to bureaucratic prejudice and hierarchical gender politics, often feels like a detached stranger in a foreign land that it's not always ready to respectfully traverse.

Deakins's mobile photography is extraordinary in the handsomely polished way it always is, even as what it's actually capturing remains aesthetically squalid and morally dubious, such as the entrance into Juárez that precedes the film's bravura border shootout sequence. As the unit drives into Juárez in a line of black SUVs, Deakins lingers on three naked, dismembered bodies hanging off of a highway overpass, a sight that should be familiar to anyone who has seen even one cartel drama, as Joe Walker's altogether lean editing cuts back to Blunt's horrified visage. Blunt's presence gives the scene a fleeting but much-needed emotional weight, but they are nonetheless the emotions of a white American woman who is (temporarily) protected by her vehicle's safety glass and the bodies therefore remain a faraway spectacle that the filmmakers seem to suggest is a daily part of life in contemporary Juárez, even though this is not entirely the case.

It'll be interesting to see the consensus around Sicario shift and shape as more and more people see it. I think it's a tougher, more incisive Hollywood thriller than its most offended, boycott-ready critics give it credit for, but it's hard to deny that they have a point and their passionate arguments remain as fascinating to read and discuss as the actual film is in its most inspired passages. It's easy to applaud Sicario's technicians and performers for their ace work, even as the film itself seems prone to more insensitive lapses in representation than many of its most vocal fans seem willing to admit. It remains a film whose very divisiveness make it a highly-recommended watch, even though the very act of watching it remains a highly-divisive decision within itself.