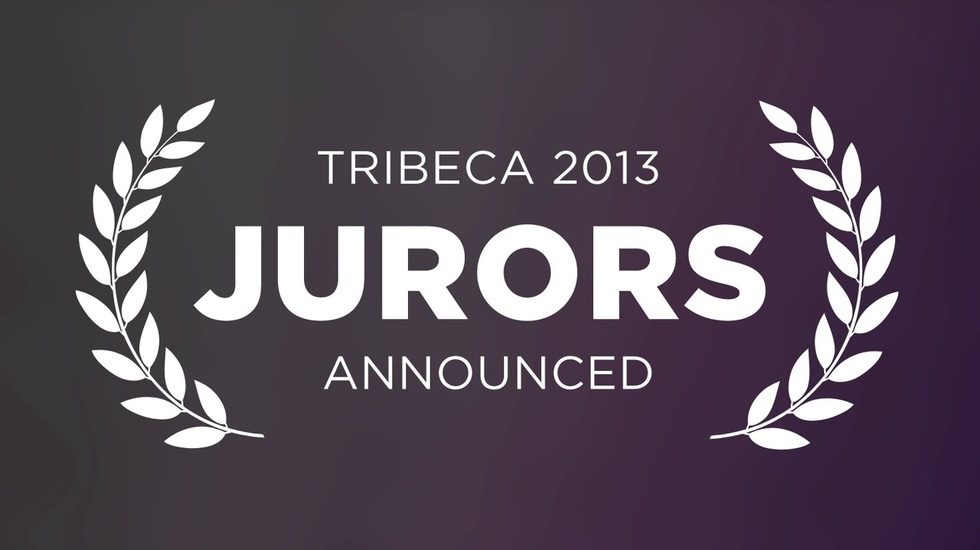 The Tribeca Film Festival (TFF), presented by founding partner American Express®, is pleased to announce our diverse group of 42 influential industry leaders, including award-winning filmmakers, writers, producers, actors, journalists and entrepreneurs, that will be divided among the seven competitive Festival categories.

The seven TFF juries will award $180,000 in cash and prizes. TFF winners will also receive a work of original art by an acclaimed artist as part of the Tribeca Film Festival Artists Awards program, sponsored by Chanel. The winning films, filmmakers and actors in each category will be announced at the TFF Awards Night ceremony, streamed live on TribecaFilm.com on April 25.

Following is a list of the 2013 Festival and Tribeca Film Institute jurors and their respective categories.

The jurors for the 2013 World Narrative Competition are:

Kenny Lonergan: Academy Award®-nominated playwright, filmmaker and screenwriter. Credits include You Can Count On Me, Gangs of New York, and Margaret. His stage credits include Lobby Hero, The Waverly Gallery and This is Our Youth. He is a member of the Naked Angels Theater Company in New York.

Bryce Dallas-Howard: Multi-award nominated actress, director, writer and producer. Acting credits include The Help, 50/50, The Twilight Saga, Hereafter, Restless, Lady in the Water, The Village and the HBO adaptation of Shakespeare’s As You Like It. She directed the short film When You Find Me as part of Canon’s innovative and inaugural “Project Imagin8ion” campaign and directed one of five short films included in The Lifetime Original Movie event “Call Me Crazy: A Five Film.”

Paul Haggis: Academy Award®-winning filmmaker whose credits include Crash, Million Dollar Baby, Flags of Our Fathers, Letters to Iwo Jima, Casino Royale, In the Valley of Elah and television including Thirtysomething and The Tracey Ullman Show.

Jessica Winter: Senior editor at Time magazine, directing coverage of the arts and culture. Her writing has appeared in Time, The New York Times, Slate, The Guardian and many others. Previously served as a juror at the London and Vancouver International Film Festivals.

The jurors for the 2013 World Documentary Competition are:

Whoopi Goldberg: Makes her directorial debut at in the 2013 TFF with the documentary I Got Somethin’ To Tell You. One of an elite group of artists who have won an Academy, Grammy, Emmy and Tony Awards.

Sandi Dubowski: Director and producer whose award-winning work has screened at Tribeca, Sundance, Berlin and Toronto Film Festivals; BBC, PBS, and ZDF-Arte; and in cinema release globally. Credits include Trembling Before G-d, A Jihad For Love and Budrus.

Evan Rachel Wood: Critically acclaimed actress who has garnered Emmy, SAG and Golden Globe nominations. Credits include The Wrestler and HBO’s Mildred Pierce. Stars in the 2013 TFF selection A Case of You.

The jurors for the 2013 Best New Narrative Director are:

Stu Zicherman: New York-based screenwriter, producer and director. Co-created the ABC’s Six Degrees and wrote and produced ABC’s What About Brian and FX’s Lights Out. Has written feature scripts for several major studios and made his feature directorial debut at the 2013 Sundance Film festival with the comedy A.C.O.D.

Ari Graynor: Film, stage and television actress and producer. Credits include the films For a Good Time Call, Celeste and Jesse Forever, 10 Years, Holy Rollers, Conviction and Nick and Nora's Infinite Playlist and the television series The Sopranos and Fringe. Broadway credits include The Performers, Relatively Speaking and The Little Dog Laughed.

Radha Mitchell: Australian actress, Radha Mitchell who currently stars on the ABC series Red Widow is best known for her work in past feature films such as High Art, Man on Fire, Finding Neverland and Woody Allen’s Melinda & Melinda.

The jurors for the 2013 Best New Documentary Director are:

Josh Radnor: Actor, writer and director best known for the Emmy Award-winning television series How I Met Your Mother. He wrote, directed and starred in Happythankyoumoreplease and Liberal Arts and next appears in Jill Soloway’s Afternoon Delight.

Jared Cohen: Founder and director of Google Ideas, senior fellow at the Council on Foreign Relations and an author. His books include: The New Digital Age: Reshaping the Future of People, Nations and Business; Children of Jihad; and One Hundred Days of Silence. Previously served as a member of the U.S. Secretary of State’s Policy Planning Staff and a close advisor to Condoleezza Rice and later Hillary Clinton.

Riley Keough: Actress whose film credits include The Runaways, The Good Doctor, Jack and Diane and Magic Mike.

The jurors for the 2013 Narrative Short Film Competition are:

Sheila Nevins: President of HBO Documentary Films, is responsible for overseeing the development and production of all documentaries for HBO, HBO2 and Cinemax. She has overseen the creation of more than 500 documentaries and has earned dozens of awards, including, Primetime Emmys, News and Documentary Emmys, and Peabody Awards.

Kassem Garaibeh: Actor, comedian, and co-founding talent of Maker Studios, a network that includes over 10,000 channels on YouTube. Credits include his award-winning YouTube series California On and Going Deep.

Jessica Hecht: Stage and screen actress known for roles on Breaking Bad, Bored to Death, Friends and Law and Order. She appears in 2013 selections The English Teacher and Space Cadet, and is starring on Broadway in The Assembled Parties.

The jurors for the 2013 Documentary and Student Short Film Competitions are:

John Skipper: President of ESPN Inc. and co-chairman of Disney Media Networks. Frequently appears on “most influential” lists in such outlets as Sports Business Journal, CableFAX Magazine, Business Week and The Sporting News.

Jason Silva: Television personality, media artist, filmmaker and techno-philosopher who has presented at TED Global, Google, The Economist Ideas Festival and at keynote events for Microsoft and IBM on the evolution of technology and its effect on humanity.

Danny Strong: Emmy Award-winning writer of HBO’s Game Change and is currently writing the two-part finale of The Hunger Games. Also an actor on Buffy the Vampire Slayer, Gilmore Girls and Mad Men.

The jurors for the 2013 BOMBAY SAPPHIRE Award for Transmedia:

Frank Rose: Bestselling author, speaker and digital anthropologist known for his books The Art of Immersion: How the Digital Generation Is Remaking Hollywood, Madison Avenue, and the Way We Tell Stories and Into the Heart of the Mind. Contributing editor to Wired magazine.

Thomas Allen Harris: Filmmaker whose videos and installations have been featured at the Museum of Modern Art, Whitney, Corcoran Gallery and the London Institute of the Arts.

The jurors for the 2013 TAA Creative Promise Award—Narrative are:

Rubén Blades: Panamanian-born musician, recorded over 20 albums, won eleven Grammys, acted in over 30 films. Ran for the Panamanian presidency in 1994. Was Minister of tourism there from 2004 through 2009. Holds degrees from Panama's Universidad Nacional, Harvard Graduate Law School and received an honorary doctorate from Berklee College of Music.

Tea Leoni: New York-native and actress whose credits include Flirting with Disaster, Spanglish, You Kill Me, Bad Boys, Family Man and Tower Heist.

The jurors for the 2013 TAA Creative Promise Award—Documentary are:

Sol Guy: Culture ninja and social entrepreneur who has worked with Lauryn Hill, Outkast and P. Diddy. Co-creator and host of the series 4REAL and currently developing a new TV series, The Talent Show.

The jurors for the TFI Latin America Media Arts Fund, including the Heineken VOCES awards are:

Julia Bacha: Brazilian media strategist and award-winning documentary filmmaker who highlights under-documented stories from the Middle East. Most recently directed and produced the short My Neighborhood, winner of a 2013 Peabody Award.