This year’s Tribeca Talks also includes Mike Myers' directorial debut, a conversation with Thelma Schoonmaker and the 10th anniversary screening of ‘Eternal Sunshine of the Spotless Mind’ to be followed by a riveting panel discussion. 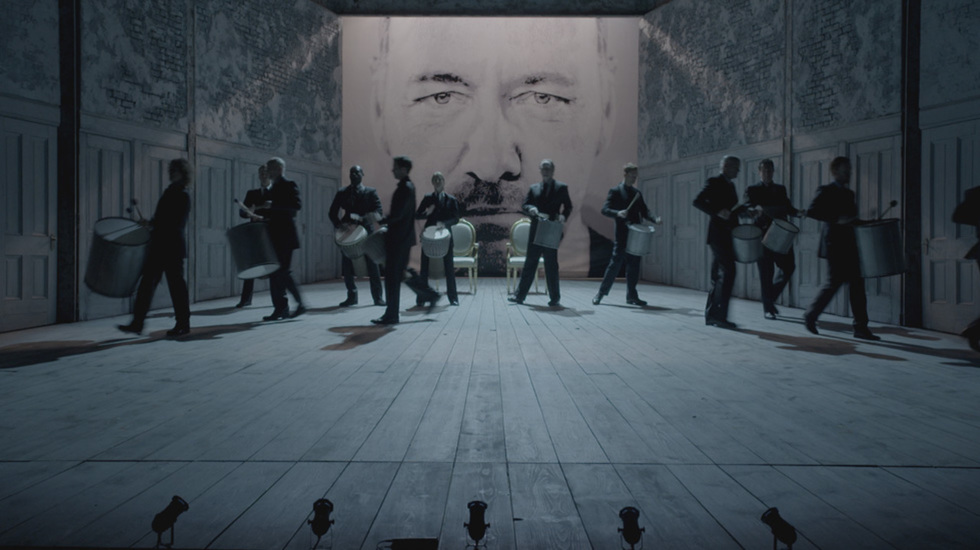 In addition,  four documentaries will enjoy their world premieres at the Festival —NOW – In the Wings on a World Stage, The Rise and Rise of Bitcoin, Compared to What: The Improbable Journey of Barney Frank, and Champs. Look for other exceptional documentary entries such as Food Chains and Supermensch as well and for the celebratory tenth anniversary screening of Eternal Sunshine of the Spotless Mind. All of these films will be shown as part of the Tribeca Talks: After the Movie series, giving audiences the opportunity both to watch and participate in a related conversation.

This year’s Tribeca Talks also offers the following additional programs: the Tribeca Talks: Directors Series, sponsored by HBO,  in which an acclaimed director participates in an intimate one-on-one conversation; Tribeca Talks: Industry conversations focusing on the technical production of film; and Tribeca Talks: Pen to Paper, hosted by Barnes & Noble, which explores topics related to the art of screenwriting.

The full schedule for the 2014 Tribeca Talks® series follows:

Academy Award®-winning filmmaker Ron Howard discusses his career as a filmmaker, writer and producer, which already spans over fifty years.

Tribeca Talks®: After the Movie

From inner-city housing projects to the biggest stages in boxing, this insightful and provocative documentary charts the lives of some of America’s heaviest hitters, including Mike Tyson, Evander Holyfield, and Bernard Hopkins, as they seek to break out of poverty via one of the few outlets available. Director Bert Marcus skillfully weaves their personal histories and gripping footage from their biggest bouts to explore the meaning of the American dream in a society increasingly fragmented between rich and poor.

After the Movie: Stay for a conversation with former boxers Mike Tyson and Evander Holyfield, writer/director Bert Marcus, and boxing promoter Lou DiBella about life, rivalry and conflict both inside and out of the ring.

Only 11 Americans have ever been charged under the Espionage Act of 1917; eight of them since President Obama took office. Oscar-nominated documentarian James Spione returns to TFF with the incredible personal journeys of two members of that octet, Thomas Drake and John Kiriakou, along with accountability advocate, Jesselyn Radack, who helped bring their cases to light. With resonance in the post-Snowden era, Silenced catalogs the lengths to which the government has gone to keep its most damning secrets, in an impassioned and thought-provoking defense of whistleblowers everywhere.

After the movie: Stay for a conversation with director James Spione, Jesselyn Radack, Thomas Drake and Barton Gellman about the role, importance and ethics of whistleblowing in America in 2014.

NOW: In the Wings on a World Stage
Directed by Jeremy Whelehan
(USA) – World Premiere

In 2012, the talented actors that make up one of the oldest companies in the world, the Old Vic Theater company, and the group's multi-talented artistic director, Kevin Spacey stage Shakespeare’s epic tragedy Richard III on a whirlwind tour across the world. Whelehan goes behind the scenes with the inspiring Tony Award® winning cast, Spacey, and the play's director Sam Mendes, to celebrate the craft of theater, the actors who bring it to brilliant life, and to deepen our understanding of theater through this ambitious international staging.

After the Movie: Stay for a conversation with Kevin Spacey,  director Jeremy Whelehan and members of the Richard III company about the vocation of acting and the future of theater and this spectacular theatrical journey.

What is Bitcoin? The digital currency, created by anonymous developer Satoshi Nakamoto in 2009, is heralded by some as the future of the global economy, even as it is increasingly stigmatized by volatility and implicated in online drug trafficking and money laundering.  Nicholas Mross’ illuminating documentary digs deep into the origins and meteoric rise of Bitcoin through the stories of those intrepid innovators at the forefront of this developing technology.

After the Movie: Stay for a conversation with director Nicholas Mross, the film’s protagonist Dan Mross, and Charles Shrem for the most up to the minute details about the mysterious and rapidly changing world of Bitcoin.

An all-star ensemble cast shines in this comical and poignant look at breakups, breakdowns and breakthroughs and the role of memory in human relationships. Joel (Jim Carrey) is stunned to discover that his girlfriend, Clementine (Kate Winslet), has had their tumultuous relationship erased from her mind. Out of desperation, he contacts the inventor of the process, Dr. Howard Mierzwiak (Tom Wilkinson), to get the same treatment. But as his memories of Clementine begin to fade, Joel suddenly realizes how much he still loves her. Kirsten Dunst, Mark Ruffalo and Elijah Wood co-star in the Academy Award winner for best original screenplay. Sponsored by the Alfred P. Sloan Foundation.

After the Movie: Stay for a conversation on the making-of and contemporary relevance of the film, including advances in our ability to manipulate the pathways of memory since the film debuted with producer Anthony Bregman, Daniella Schiller, Professor of Psychiatry & Neuroscience/Mount Sinai, and others, moderated by Science Friday® host Ira Flatlow.

Executive produced by Eva Longoria, this hard hitting documentary gives pause for thought with every plate of food we eat by exposing the rampant abuse and injustice embedded in America’s agriculture and food production industries.  The film sheds light on the wage theft, physical abuse and outright slavery that constitutes everyday life for thousands of America’s (mostly Latino) farm workers, and gives voice to those fighting to change these practices and bring justice to the table.

After the Movie: Join Executive Producer Eva Longoria, director, Sanjay Rawal, Kerry Kennedy, Eric Schlosser and a representative from the Coalition of Immokalee Workers to learn more about behind the scenes in America’s food chain and what you can do to be part of the food justice revolution.

In his directorial debut, Mike Myers brings a comic touch to documenting the astounding career of consummate Hollywood insider Shep Gordon. Making playful use of archival footage, new interviews, and his own close relationship with the legendary talent manager, Myers reveals a man who has embraced his dualities: a hard-driving dealmaker who wants everyone to be happy and a rock ‘n’ roll hedonist who yearns for a family. Against a backdrop of debauchery, he’s a man on a spiritual quest. These contradictions make him a fascinating documentary subject.

After the Movie: Stay for a conversation with Shep Gordon, Michael Douglas for some inside baseball Hollywood stories.

Compared to What: The Improbable Journey of Barney Frank
Directed by Sheila Canavan and Michael Chandler
(USA) – World Premiere

Compared to What: The Improbable Journey of Barney Frank is a rare and intimate peek into the life of Barney Frank, the quick-witted, cantankerous, and first openly gay Congressman in the United States. On the verge of his retirement, Frank reflects on his 40 years in office and the role his own homosexuality played in his campaigns for social justice. A flawless example of when the personal meets the political, with incredible “bare all” access, this documentary reveals Frank as one of the most sharp-tongued, entertaining, and lionhearted politicians of our time.

After the Movie: Stay for a conversation with Barney Frank and Alec Baldwin about the politics of Washington, Barney’s life and career and what he plans to do in his retirement.

Ever since the creation of the talkie, sound in film has been evolving. The Dolby Institute brings together top sound designers to discuss what it really takes to create the sound of a film, and the army it takes just to hear a pin drop. Panelists will explore scenes from their work and divulge the strategy behind using sound as a storytelling tool.  Panelists include Academy Award® winning sound mixer Skip Lievsay (Gravity) and music supervisor Susan Jacobs (Silver Linings Playbook).

It’s said that a movie is made three times: once through a script, once on set, and finally in the edit room. Join us to hear tales from the cutting room floor from longtime Martin Scorsese collaborator Thelma Schoonmaker as she discusses her incredible career.

Filmmakers with a thirst for storytelling are saturating our digital media landscape with short content, changing the way we seek and consume media.  Hear some of the creators discuss the challenges faced in creating snappy, attention grabbing and informative content, and how to garner an audience outside of a theater. Panelists include director, producer Morgan Spurlock and ESPN’s Dan Silver.

Storytelling involves the decision of how much truth to tell. The editing process incites the omission of information or facts. When focusing on true stories, filmmakers are still only able to tell us part of the story. How do they determine what their truth will be, and how much does the repercussion of truth factor into this decision?

From stage plays and books to original or adapted screenplays, filmmakers are constantly adapting and creating stories for the screen.  Join us for an exploration into the experience of filming work created from different content, and how true you should stay to the original text when shooting an adaptation or script you didn’t write.

Both documentary and narrative films constantly explore moving for social change in a variety of ways, either directly or indirectly. Whether it’s about human rights, the environmental or personal change, these films are at the forefront of today’s cinema and have a new and unique opportunity to affect change in society.

A conversation about the particular art in creating authentic sports stories - from non-fiction material to heart stopping hits that satisfy hardcore fans while also connecting with broader audiences. Featuring director, Peter Berg best known for his hit TV series and film, Friday Night Lights and for the recent sports doc series, State of Play which illuminates the intersection of sports and sports culture with wider society in 2014 America.

In the wake of the 1973 military coup in Chile, American-backed dictator Augusto Pinochet transformed Santiago’s National Stadium into a concentration camp where political opponents were tortured and assassinated.  Only months later, that same stadium was scheduled to host a decisive World Cup qualifier between Chile and the Soviet Union.  Despite protests, FIFA’s own investigation, and the Soviets’ eventual boycott, the Chilean team still played the game as planned, qualifying for the 1974 World Cup on a goal scored against no one.

In the 1986 World Cup, Diego Armando Maradona redefined what is possible for one man to accomplish on the soccer field. Already a figure of notoriety, but with one failed World Cup behind him, Argentinian Maradona took possession of the international stage in Mexico, the spotlight rarely drifting from him as he wrote an indelible history with his feet and, of course, with a “hand from God.” Delivered with passion and intelligence, Maradona ‘86 is a fascinating, evocative, and operatic portrait, revealing Maradona’s inner complexity and contradictions while basking in the joy and passion of his performance on the pitch, as he wrote his name on soccer history forever.

After the Movie: Filmmakers Ezra Edelman, Daniel Battsek and ESPN speak about the films and the upcoming World Cup