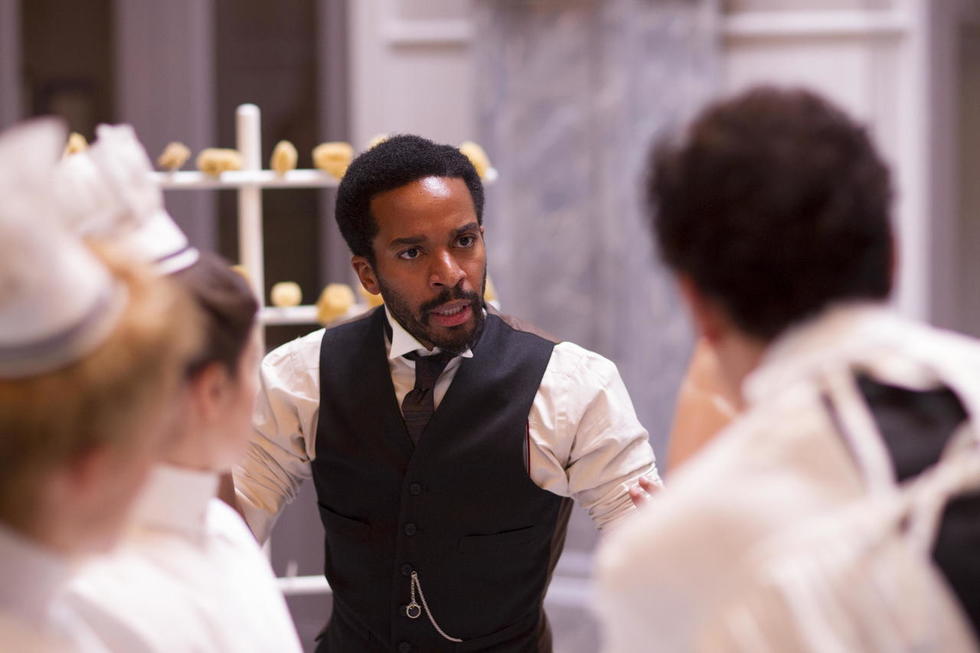 Andre Holland in a scene from Cinemax's THE KNICK (2014).

The Knick, which returns tomorrow night for its second season on Cinemax, is one of the best TV shows that, chances are, you’re probably not watching. If you are, salute; if not, please somehow find the time within the next 24 hours to binge-watch all 10 hours of the show’s first season. (After you finish reading this post, of course). Wholly directed by Steven Soderbergh, The Knick follows the blood, drugs, and racial tensions that exist in and around New York City’s Knickerbocker Hospital in 1900. Clive Owens headlines as Dr. John Thackery, a widely respected and ambitious surgeon whose also a full-blown drug addict. The show’s operating room scenes are grislier than whatever horror movie you think would be nastier; Soderbergh's camerawork and visual panache lifts it above other TV fare; and the acting is uniformly superb.

One of The Knick’s best assets is co-star André Holland, who plays Dr. Algernon Edwards, a cultured, internationally educated surgeon who’s treated like a second-class citizen due to his skin color. Algernon functions as the show’s lynchpin towards an overall complex and intelligent look at turn-of-the-century race relations—and how those issues don’t seem all that different from what’s happening today.

Holland has pointed out as much in a candid and excellent conversation with Grantland's resident TV critic Andy Greenwald during the new episode of "The Andy Greenwald Podcast"; specifically, Holland compared Algernon’s double-sided prejudices to a current conversation happening within Hollywood lately about how and why black actors from England keep landing parts over American black actors. The debate caught steam around the release of Selma, in which British actor David Oyelowo plays Dr. Martin Luther King, Jr., and fellow Brit performer Carmen Ejogo plays Coretta Scott King, and it continues with A-list stars Idris Elba like Chiwetel Ejiofor.

On The Knick, Edwards has to endure cold shoulders from his all-white surgeon peers at the hospital, but when he’s back home, in the grungy, low-rent apartment designated for black folks, his neighbors look at him as if he’s a hoity-toity, privileged alien just because he wears fancy shoes and speaks with refined diction. In the modern-day film business, the reasoning behind why British actors of color are scoring so many prime roles is that, per the close-minded people trying to defend the situation, they’re better-trained thanks to England’s theater programs—not unlike Algernon Edwards’ fictional background.

While chatting with Greenwald, Holland kept it all the way real about why that’s, in his own words, "bullshit." For one, Holland, who hails from Alabama, has worked steadily on the stage himself, even spending time alongside England’s thespians in that country's productions. "The fact is, every spring, all the drama schools around this country…graduate classes of actors, and within those classes are actors of color who are trained," says Holland. "They've done Shakespeare, they’ve done Ipsen, they've done Chekov. And the only thing that those actors are missing is, as Viola Davis said, opportunity. They might not get agents out of school because there are only so many slots those agents have to service those actors. So what happens to them? They’re still here. I happen to know a lot of them. And for anybody who's in the casting community having a hard time finding them, call me—I'll put you in touch."

Holland continued, “"I'm really, really passionate about that, because it’s divisive, number one, and it's also, I think, a real slap in the face to the people who have been out here working, and hustling, and knocking on doors, and doing plays downtown for $100 a week. It's really disrespectful."

Later in the discussion, Holland recalls a recent, deeply troubling experience of his own. "Just the other day, there was a script that I read and really responded to, and I said, 'Man, I’d really like to pursue this part,' and what I heard was, 'Well, the producers realize that they need to get some diversity in there somewhere, but they’re just not sure yet which part they want to make ethnic.' Which is one of the most reductive things I think I’ve ever heard. It makes me, an actor who spent 15 years of my life training and preparing for this, feel as though I’m just a spare part hanging around and waiting to be plugged in somewhere. I’m worth more than that, as are many of my brothers and sisters."

Greenwald's entire interview with Holland is worth a listen. Head over to Grantland to check it out, and, again, catch up with The Knick in time to enjoy the second season this fall. It’s more than worth the effort—trust.