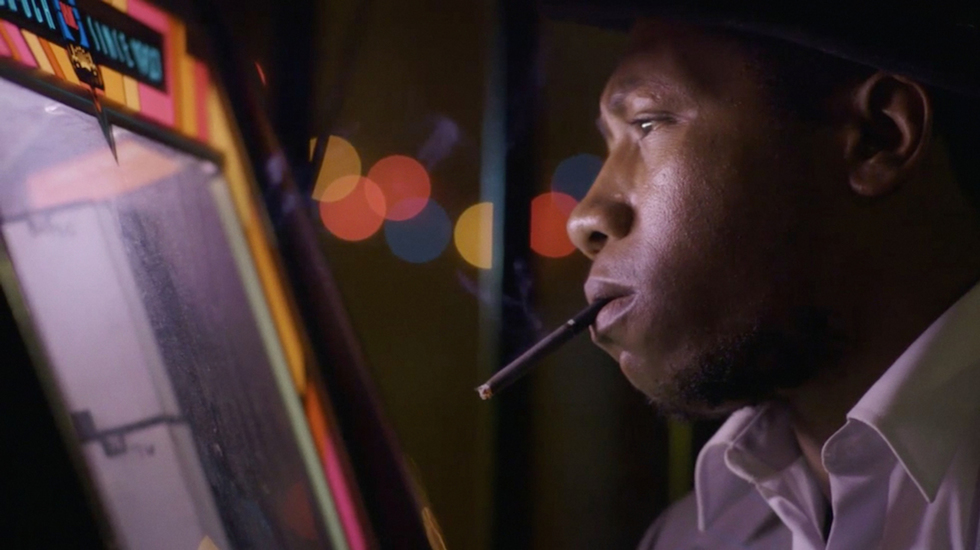 Fanatically formal and aesthetically devoted in a way that few contemporary American films are, Tim Sutton's Memphis harks back to some of the great cinematic stylists of bygone years - Michelangelo Antonioni is a definite influence, as are more contemporary auteurs like Béla Tarr and experimental-period Gus Van Sant. Having premiered at Venice 2013 (as well as playing Sundance 2013), the film is a stirring portrait of an individual against the backdrop of a lush and pulsing environment. Memphis is a narrative feature about real-life musician Willis Earl Beal playing a somewhat-fictionalized version of himself as a musician trying to find inspiration and meaning in the titular town.

This may seem like a paltry narrative summary, but Memphis is not a typical narrative film. Sutton won't refer to the film as an experimental work, and neither will I, though the film eschews traditional narrative storytelling. Rather, it features a progression through character and space that is dictated - as Sutton explained to me - by a progression through various environments and atmospheres. I was excited to speak with Sutton not only because of his aesthetically daring film, but also because Memphis was one of three features selected to be financed by the 2013 Venice College, a new initiative by the Venice Film Festival that provides full financing to micro-budget projects. Sutton shared his thoughts on that exciting experience as well.

Memphis is as much a psychic state of mind as it is a city. It's a place that I feel a great power coming from within.

Tribeca Film: I sensed a strong Antonioni and Béla Tarr influence in the film, in the manner in which it focuses on aestheticizing the experience of a character moving through their environment. Can you speak to that?

Tim Sutton: I called the film Memphis because the film is about figures in a landscape, about the way figures and landscape meld together to form a new space. I think with The Passenger and Zabriskie Point, for example, the landscape is as much the meaning of the movie as anything else. I got into this when I was an art director at Getty Images for years, which meant I was basically a funded short filmmaker in their stock footage department. I basically made silent films. We were on set all the time, working a certain language out, my DP and I. So when I wanted to make Pavilion, a movie about youth, the one bit of story was, this is about a kid who moves across the country. The geography changes drastically. That's the story, that's it. As far as Memphis is concerned, you know, Memphis is as much a psychic state of mind as it is a city. It's a place that I feel a great power coming from within. The sense of nature reclaiming the landscape. It's a kind of Eden in transition. I think of Willis as a monk floating through this Eden. Willis is perfect for that because he considers himself something of a wizard or a monk, searching for something that has no definition. That's how we approached the storytelling. I just look for 30 seconds of truth or beauty, something I can truly relate to, in each scene, and I'll move on from there. I need one piece where everything is connected, something that solidifies the idea that I've reached something. And then I move on and create the next scene. Some people complain that the story isn't explained enough, but to me the story is very clear, it's just not linear in the way people are used to. So if I have Willis walking down the street on the way to church, and he closes his eyes, perfect, that's it. He becomes a ghost on his way to church. It may not be explainable, but it's something you experience.

Tribeca Film: It sounds like you do approach the scene in a manner similar to classical storytelling, where the potentialities for a scene narrow down until you get to the core of what the scene must be, no other options left, and then once you understand that you move on.

Tribeca Film: Bearing that in mind, I'm curious to hear your thoughts on cause and effect in narrative, the larger narrative of the film. How do you determine the order of the scenes?

Tim Sutton: There are two very separate processes. I wrote a story, something between a script and a treatment, about the descent of a person into a state of vanishing. So I wrote this whole thing and showed it to the producers and everyone, and it was always a blueprint to understand the kind of story I wanted to tell. We constructed it as a visual descent. So we start with Willis in a mansion, and each location has him further down - he's on a couch, then in a squat, then a cabin, then the woods. That is how the story is constructed. Through that I created the shooting days. So maybe day one is, he walks from here to there. Willis was a Bressonian model, in a way. So we would shoot the day, then I would talk the next day over with everyone, and I would go off and write the next day out. So eventually we knew where the character had been, where he was, and where he had to go. But every day I came up with something new. You have to be flexible to work that way, you need a small crew, and you also have to roll with what the realities of the production's limitations are. But the story I wrote is very much the final product, albeit in a different language.

I didn't go down there and tell people how to act, how to be who they already are. My job was to frame that reality and make it something mythic.

Tribeca Film: There are so many films and filmmakers that start from a storytelling idea that comes from theater or literature. For you, the storytelling comes from a basis in visual imagery. So how do you construct your visuals, and also, how do you see your style of filmmaking situated in contemporary film culture?

Tim Sutton: I have a very close relationship with my DP, a great trust with him. Typically we talk about what needs to happen, what the shot is, and I will point in the direction of the shot. Sometimes I dictate the frame but often I only have a general idea of what it looks like and Chris sets up the shot. Then I'll tell the actor, this is where you are, this is the camera's setup, this is what we want you to do, and then I give up all control. If Chris has to do something improvised during the shot, he has my blessing. The character has all the power in the frame. I think one of the reasons Pavilion worked was because I wasn't telling the kids what to do. Memphis was the same way. I didn't go down there and tell people how to act, how to be who they already are. My job was to frame that reality and make it something mythic. So it's all about your frame and your texture and background and light, and you have to find people who will fill your frame with confidence. I look at films as an aesthetic experience, I have to value every frame, so if there's something I'm not behind I take it out, even if it explains something to the viewer. I'd rather take it out. There is a small field of people who work in this manner. Someone called this film daringly experimental. I don't think of it as an experimental film, but I think the field has narrowed. I think if some genius like Antonioni was making films today, he'd barely be seen. Béla Tarr is great, but if he came out now I think it'd be hard for him to get seen. The storytelling we're in, there's an expectation with your story that the people understand the storytelling or are at least comfortable with it, and that the filmmaker is leaning toward accessibility. The films that I'm making are more like experiences, like journeys. If you're on a journey you're going to lose a big part of your audience, but that's not my interest.

That's how we approached the storytelling. I just look for 30 seconds of truth or beauty in each scene, and I'll move on from there.

Tribeca Film: It reminds me of something Susan Sontag wrote in Against Interpretation, that the meaning of a film could be not what one extrapolated from it after viewing, but rather, the meaning of it was literally the experience of watching it.

Tim Sutton: Right. You know, the editor and I often sit in the editing room and joke, okay, if anyone is still watching, they're going to experience X. But it's true - if they're watching, they're on a journey. If they're not watching, hopefully they think Willis is kooky or they like the cinematography or something, but if, a few minutes in, they can stop worrying about understanding and just let their eyes relax, it can be a meaningful experience. I think that's the best I can do.

Tribeca Film: The film was selected by the Venice College. What was that experience like?

Tim Sutton: It started out a little like Top Chef, but without cameras there. You go there, there are 15 projects from all over the world, and only three get funded. You work with a team of experts, some of whom were really great, and so you develop your project and pitch it to the head of the Biennale. We walked away with funding. I always said to them that the pitch was a blueprint and the film would be made on set. They were very supportive of us going out and making an art film. They weren't looking for a home run. They really want to help filmmakers get from side A to side B.