These five events, all scheduled at the Festival's new creative hub Spring Studios, will show how VR is becoming more popular and accessible than ever before. 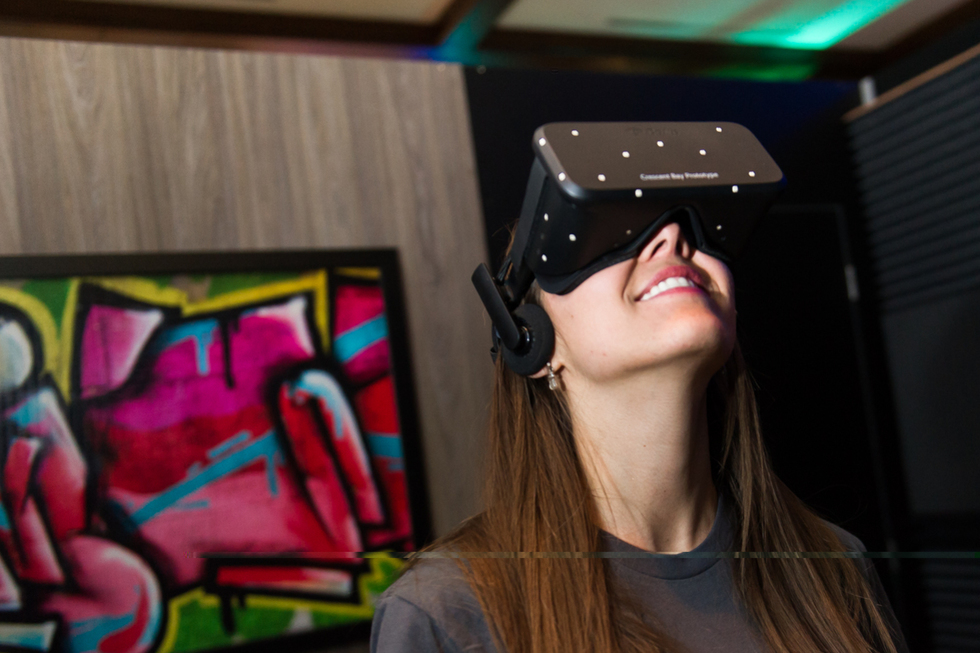 Expect plenty more than just the future of independent cinema at the 2015 Tribeca Film Festival, presented by AT&T—you'll also be able to see the future of human interaction, up close and personal.

Stepping up its interactive storytelling, TFF will be the new home for the virtual reality revolution. The momentum's continuing from the TFF 2014 film Clouds, an immersive, VR-centric documentary, shown through the Oculus Rift, that won the Bombay Sapphire Award for Transmedia. In the year since, the technology has entered the mainstream. For as little as $25, anyone can try out virtual reality on their smartphones. Gone are the days when VR was limited to sci-fi movies and exclusive conferences attended by Steve Jobs wannabes; with virtual reality becoming more and more readily accessible, enterprising tech gurus and companies have made the experiential phenomenon something any Average Joe can access.

Not to mention, there will be a VR master holding down the fort. Chris Milk will be the inaugural Tribeca Film Festival Featured Creator at Spring Studios. The acclaimed digital artist and filmmaker has directed music videos for Kanye West and overseen groundbreaking projects like Arcade Fire's interactive short film/music video Wilderness Downtown and the animated The Johnny Cash Project.

Milk's latest moves, though, are less Johnny Cash and more Johnny Mnemonic. Throughout the festival, Milk will show off some of his new virtual reality endeavors, all backed by his new company VRSE. He'll bless Spring Studios with a sampling of VRSE's newest efforts, including "Clouds Over Sidra," an eye-opening, humanitarian-minded project, produced by UNICEF, that puts users in the shoes of a 12-year-old Syrian refugee in a Zaatari camp in Jordan, and "Evolution of Verse," a 3.5-minute short that places users in beautiful, post-card-ready, computer-generated landscapes.

Here is your complete guide to VR at Spring Studios.

If you think Netflix’s altering of the television landscape has been forward-thinking, wait until you see what’s in store for cinema.
Oculus Story Studio is a small internal team of film and game developers dedicated to exploring "immersive cinema," real-time story-driven VR experiences that let the viewer step inside and actively participate in the story. Their goal is to learn more about cinema and storytelling in VR and to share that knowledge with the film community.

On Friday, April 24, and Saturday, April 25, Oculus Story Studio will showcase its short (6.5-minute) experience called "Lost" using the Oculus Rift Crescent Bay prototype. "Lost" takes the viewer on a journey to a moonlit forest inhabited by an unexpected creature. The piece is directed by Oculus Story Studio’s creative director Saschka Unseld, who also directed Pixar’s short film The Blue Umbrella.
In addition to Oculus Story Studio's presence at TFF, Oculus VR's chief scientist Michael Abrash will speak during TFF's Innovation Week, through Tribeca's partnership with the Games for Change Festival. He's one of the people responsible for Facebook spending $2 billion on acquiring Oculus VR last year. Don't be surprised if he casually drops some more billion-dollar ideas at TFF later this month. You'd be wise to be there to catch them. Free and open to the public with a wrist band.

There’s a reason why trailblazers like Facebook founder Mark Zuckerberg and Google founder Larry Page have consulted with Jeremy Bailenson—and you’ll soon be able to find out why for yourselves.

Bailenson, the founding director of Stanford University’s Virtual Human Interaction Lab, will be on hand during the festival for a very special Tribeca Talks®: Imagination discussion on Wednesday, April 22 (at 12:40 p.m.), powered by The Hatchery, in which the Associate Professor in Stanford’s Department of Communication will break down the many sides of virtual reality—including, most importantly, the empathetic side. Having also co-authored 2011’s Infinite Reality: Avatars, Eternal Life, New Worlds, and the Dawn of the Virtual Revolution, Bailenson is one of the world’s foremost VR experts.

Buy your ticket to hear Bailenson speak on April 22 here

And Bailenson isn't coming empty-handed. In addition to his Tribeca Talks event, Bailenson is also behind TFF's Stanford Virtual Reality Lab, which will be in full force at Spring Studios. With something for everyone, whether you're a budding activist or athlete, the VHIL will host a three-part presentation comprised of: a demo geared towards promoting climate change that will put users near the bottom of the ocean to show how CO2 forms and destroys underwater reefs; an equality-minded VR experience that puts users in the bodies distinguished by different races, genders, and ages; and a sports training demo—one that’s been utilized by the Golden State Warriors and NBA commissioner Adam Silver, as well as included in the NFL Combine—aimed at giving festivalgoers the chance to feel like NBA all-stars and NFL quarterbacks.

Tribeca’s virtual reality showcases will be spread across the festival’s coolest non-movie programs: the third edition of the Storyscapes program (Thursday, April 16 – Sunday, April 19), sponsored by BOMBAY SAPPHIRE®, and TFI Interactive’s 2nd annual "Interactive Playground," which will offer a variety of hands-on projects for attendees from 10:00 a.m. – 7:00 p.m. on Saturday, April 18.

Attending film festivals can be exhausting—call it a first-world cinephile problem. At the Tribeca Film Festival, in particular, you’ll have nearly two weeks to watch as many movies and listen to as many Tribeca Talks as possible. You’re going to want to some downtime outside of the theaters.

That’s where the TFI Interactive Playground comes into play. On Saturday, 4/18, the Playground's second edition will offer a handful of virtual reality options, two of which put users in a couple of precarious situations. In PaperDude, you’ll cruise the streets as, that’s right, a paperboy, bobbing and weaving through traffic and treating news delivery like it's an X Games sport; in Keep Talking, the threat levels amplify considerably, with you and a friend working together to diffuse a bomb before…we’re sure you can figure out the rest. It wouldn’t be pretty.

It won’t be all fun and games, though. Nonny De la Peña, Los Angeles’ "Godmother of VR," has long been dedicated to merging journalism with VR tech, and her latest project is sure to impact. De la Peña’s Trayvon Martin Project will give users a closer look at the late, unarmed 17-year-old Floridian’s story, which, sadly, ended when Neighborhood Watch volunteer George Zimmerman fatally shot him in February 2012.
The Interactive Playground will be open to Spring Pass and Day Pass holders, TFF badge holders, and TFI Members.

The Machine To Be Another: Embodied Narratives
Project Creator: BeAnotherLab

Admit it, you get tired of being yourself. The same old body, warts and all. That same awkward voice that sounds weirdly alien whenever it’s played back to you. Those same recurring memories of break-ups and other rough times. Drop that familiarity for a second, though, and imagine what it’d be like to live in someone else’s skin, even if only for a few minutes. Well, during the fest, as part of the Storyscapes program, you’ll get the chance to experience that. Think of it as your own personal Freaky Friday, with modern technological advancements replacing Lindsay Lohan.

The epitome of VR intimacy, BeAnotherLab’s The Machine To Be Another takes body swapping out of trippy science fiction and into reality. While wearing head-mounted goggles and headphones, the user sees the other person’s body as his or her own while hearing the other’s thoughts. Presented at the festival’s new Spring Studios location, BeAnotherLab’s innovative out-of-body experience targets specific aspects of the other person’s life, each initiated when the user touches various objects in the room.

The best part is, if you break something, you can blame it on someone else.

The harsh reality with war, from America’s Civil War all the way through today’s Middle Eastern conflicts, is that one side rarely considers what it’s like being on the other side. Because of that, the empathy is lost—there’s only bias-fueled anger and dangerous misunderstandings. Fortunately, veteran war photographer Karim Ben Khelifa is here to bridge the wartime gap.

Part of the BOMBAY SAPPHIRE®-backed Storyscapes program, Khelifa’s ambitious and thought-provoking VR project The Enemy grants you the opportunity to hear both sides of the Israeli/Palestinian conflict. Armed with the proper VR gear, you’ll be able to peruse a gallery of Khelifa’s photographs; after focusing on one of the images, you’ll be greeted by an avatar representation of the photo’s subject (either an Israeli or Palestinian soldier) and allowed to eavesdrop on Khelifa’s interview with said subject. You’re then able to switch over and do the same with an opposing soldier.

The result: the kind of in-your-face firsthand compassion that news outlets like CNN can’t provide through TV screens and Internet browsers. The Enemy could very well be the future of peacekeeping.
Reservations for the free Storyscapes exhibition are open to the public beginning on April 6 at tribecafilm.com.