Special guests were blessed with an intimate performance from the R&amp;B superstar and an exclusive look at her latest cinematically minded project. 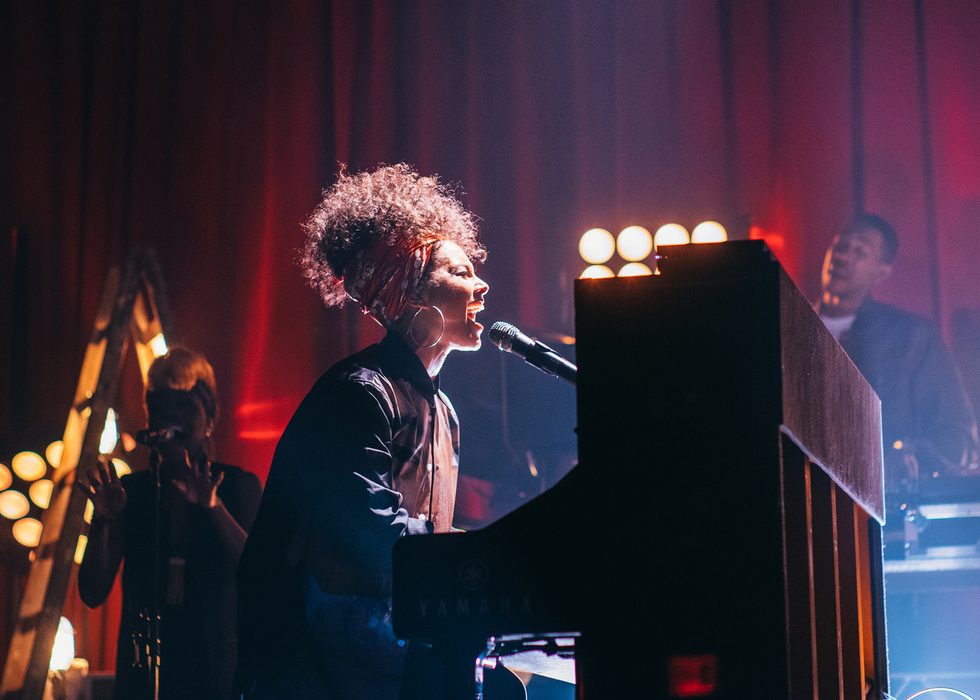 The timing was as uncanny as it was terribly unfortunate.

Last night, inside Lower Manhattan's Highline Ballroom, Alicia Keys debuted some of her first new music in four years, since the release of her fifth studio album, 2012's Girl on Fire. The private event, held in conjunction with the Tribeca Film Festival, served as the world premiere of Keys' new 23-minute video installation/short film project, The Gospel, which features brand-new songs and striking, documentary-style footage of New York City. While introducing the black-and-white production, Keys was visibly nervous, though also excited to share her latest work with a small but loudly supportive crowd. "There's nothing more special than the first time," she remarked, subtly acknowledging the night’s exclusivity.

But Keys couldn't ignore the day's tragic mood. As she put it, April 21, 2016, was a "heavy, shocking day." Several hours earlier, the news broke that the incomparable music icon Prince had suddenly passed away, at the too-young age of 57. Like every other person who records music professionally, or even just for fun, Keys has been heavily influenced by the genius who gave listeners masterworks such as Purple Rain, and she used The Gospel's premiere to voice her sadness over the great one's death, calling Prince "one of my greatest inspirations." She added, "He showed me what it is to be an artist, and how to put art first." She admires how he was able to use music to take "the pain in you, the misery in you, and the lighter part in you, and share it all."

That same desire to convey her own innermost thoughts and emotions inspired her to debut The Gospel so far in advance of its official release, which is still to be determined. It wasn't easy for Keys to do so, though. Before finally agreeing to present the new project with last night’s screening and mini concert, she asked herself, "Am I ready to go there?" The answer hit her quickly, however. “I was,” she told the crowd. "And I am." She considers The Gospel, which consists of vignettes about coming-of-age in New York City, to be “a prequel to my first record [2001's Songs in A Minor]," and an ode to "the New York I grew up with, the New York I saw."

After that set-up, Keys stepped off stage to let The Gospel take over. Directed by a young up-and-coming filmmaker named A.V. Rockwell, it's part Frederick Wiseman and part Fab 5 Freddy. The camera observantly roams through NYC's streets and project buildings, catching groups of pre-teen kids playing hide-and-seek and teenagers playfully slap-boxing with one another in crowded outdoor parks. Anecdotal voiceovers from Keys and anonymous NYC residents accompany slow-motion shots of bodegas and apartment buildings' hallways. Contemplative narration taps into common, everyday feelings and fears: "I wish someone would’ve told me how fast this life goes," says one faceless young man. "It's like you go to sleep one night, then you wake up, and you're 30."

The Gospel is split up into four chapters, each powered by its own new Keys record; altogether, it's like audio catnip for '80s babies who grew up on '90s-era East Coast hip-hop. The first chapter, titled "All God’s Children," opens with an audio sample from the Wu-Tang Clan's 1995 St. Ides malt liquor commercial, the hardcore Wu fan's treasure that abruptly cuts off after Ghostface Killah's line, "Naturally blessed, yes, my rap is like a laser beam." Once that lyric's done, Keys flips the commercial’s piano-heavy, RZA-produced beat into her own self-played organ arrangement, not unlike what she did on the Songs in A Minor single “Girlfriend,” which samples the late Wu-Tang Clan member Ol' Dirty Bastard's "Brooklyn Zoo."

From there, the classic East Coast rap beats continue throughout The Gospel. The second chapter, "Sweet Girl," starts with a fresh Keys track that uses the same bassline employed by The Fugees on their monster 1996 radio hit "Killing Me Softly" and ends with another record backed by Q-Tip’s xylophone-based beat for Nas' "One Love,” from 1994's Illmatic. And the soundtrack of the third chapter, “Young Love,” incorporates the production from Audio Two's 1987 single "Top Billin'." "Young Love" is The Gospel’s funniest section, with a sequence in which an extra-thirsty dude annoyingly kicks game to a beautiful woman on the street. His opening line is coincidentally timely. “My name is Prince—your prince,” he says, followed by the promise that he'd "upgrade" her, only to call her suggestion of dinner at a steakhouse “too pricey” after asking her to pick a first-date locale.

After The Gospel's hip-hop nostalgia and slice-of-life realism, Keys premiered a second short film, this one connected to her new social change movement/coalition, We Are Here, dedicated to putting an end to “the injustices of poverty, oppression, and helplessness.” (Learn more about We Are Here at its official website.) Functioning as a longer-form music video for a new Keys song titled "Hallelujah," the seven-minute short, directed by Jonathan Olinger, features the singer and a fictional daughter fleeing with other "American refugees" towards the Mexican border, after military bomb raids decimate their Southern California neighborhood. A role-reversal commentary on immigration and America/Mexico relations, Olinger's film is pointed directly at an issue that Keys considers to be "the most horrifying humanitarian crisis" of our time: the plight of refugees.

Once the topically provocative "Hallelujah" clip ended, Keys lightened the mood the best way she knows how to: by delivering an awesome live musical performance. Joined by a five-piece band, including a DJ on turntables, she performed a few of the songs heard in The Gospel, kicking the set off with that aforementioned Wu-Tang "St. Ides" track, to which Keys energetically karaoke-rapped.

The performance's apex, though, brought the evening back around full circle. Giving the night a kind of MTV Unplugged vibe, Keys grabbed the microphone and told the crowd the story of how she was able to get Prince's permission to cover his 1982 song "How Come You Don’t Call Me" for Songs in A Minor. Barely 20 years old at the time, Keys was understandably nervous at the thought of Prince actually calling her to discuss the possibility of letting her re-record one of tracks. The fateful call happened while she was in a hotel room, and it took eight separate handlers to finally get Prince on the line—after, keep in mind, his people called her. "I know he did that on purpose to scare the shit out of me," joked Keys. "I know it!"

Then, after instructing the crowd to snap their fingers in Prince's honor, Keys gave a killer performance of "How Come You Don't Call Me." The dozens of Highline visitors singing along with her every word undoubtedly had Prince Rogers Nelson in their mind the whole time.

For them, what began as a profoundly sad day concluded in a way that certainly would've made The Purple One smile.