Home » Tribeca News » A Guide to All of the Films, Performances, and Events for Music Lovers at Tribeca 2016
View All News

A Guide to All of the Films, Performances, and Events for Music Lovers at Tribeca 2016

This year, more than ever before, Tribeca will be a haven for music aficionados. Here are all of the reasons why. 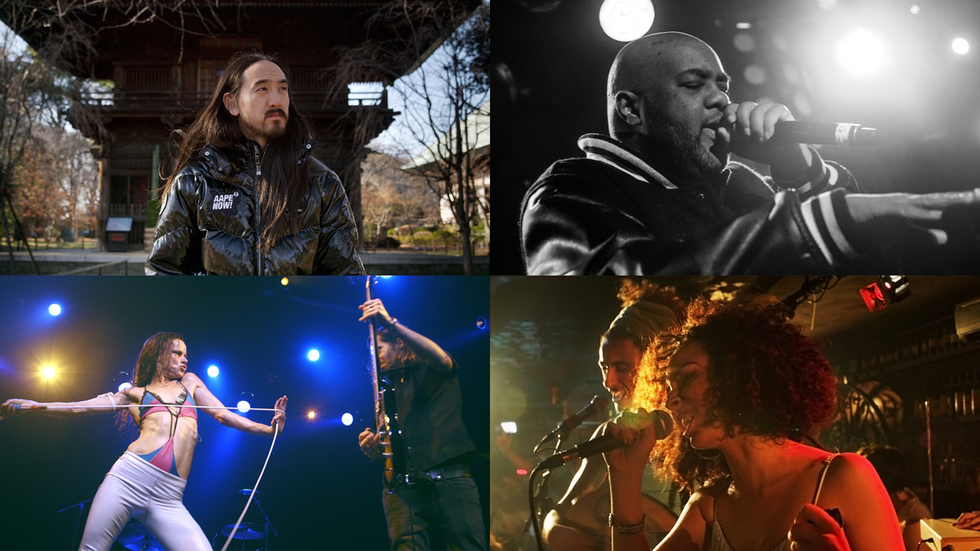 Clockwise from top left: I'LL SLEEP WHEN I'M DEAD, GIFT OF GAB, AS I OPEN MY EYES, and HARD LOVIN' WOMAN

There are plenty of different ways to get your music fix at this year's Tribeca Film Festival; some are obvious, and some are unexpected. There are music-related narrative features, like Junction 48, an Israeli film about rap and politics. There are also music documentaries, like Contemporary Color, which, if you didn't happen to be at the Barclays Center show last year, will give you a chance to experience legendary David Byrne's ambitious performance project. As for short films, there are so many exceptional music-oriented contenders this year that we decided that they deserve their own section: Rock and a Hard Place, through which you can travel from frozen sand skating ramps in Norway to where David Bowie shot the classic "Let’s Dance" video in Australia, without having to leave the movie theater.

Tribeca 2016's lineup features some musicians turned directors: Natasha Khan (better known as Bat for Lashes) directed a segment in the romantic omnibus Madly, and Rooney's frontman Robert Schwartzman directed Dreamland, a film about a part-time pianist. On the other hand, there are a few musicians turned actors, like synth-pop indie darling Sky Ferreira in Elvis & Nixon, and Green Day's Billie Joe Armstrong, who plays an ex-punk star going through a midlife crisis in Geezer. (Note: That's fiction, not documentary.) Other music artists are working behind the scenes: Justin Timberlake scored the Jessica-Biel-produced The Devil and the Deep Blue Sea, members of Sigur Rós scored The Show of Shows: 100 Years of Vaudeville, Circuses and Carnivals, and the critically acclaimed experimental producer Flying Lotus scored documentary LoveTrue; the latter is directed by TFF winner Alma Har'el, who began her film career as a music video director, gaining recognition for her work with the band Beirut.

Speaking of music video veterans, Kevin Ford, known for his work with Jane’s Addiction and Stone Temple Pilots, is one of the creators of the bomb, a mega multimedia installation that confronts the imminent issue of nuclear weapons. The film component will be projected on massive 360° screens while The Acid, the multinational electronic trio, performs an original score in the center of the room. The installation was staged by United Visual Artists, who’ve collaborated with Massive Attack and James Blake. Its art director is Stanley Donwood, known for designing many of Radiohead’s album covers and posters.

And if you're the type who likes to consume their music straight-no-chaser, get ready for live performances from Juliette Lewis' rock band Juliette and the Licks and raucous EDM superstar Steve Aoki. (Warning: Cakes may be thrown at your face courtesy of Mr. Aoki.)

I'll Sleep When I'm Dead
Section: Special Screenings
Directed by Justin Krook. (USA – World Premiere, Documentary.
From producers Matthew Weaver and David Gelb (Chef’s Table, TFF 2015 Jiro Dreams of Sushi, TFF 2011) is an energetic, heart-pumping documentary about one of the most eminent DJs working today: Steve Aoki. In the lead-up to Aoki’s biggest show of his career, the doc examines the driving force behind his passion: Rocky Aoki, daredevil showman, Benihana founder, and Steve's absent father. Following the film, there will be a conversation and performance with Steve Aoki at The Beacon Theatre. BUY TICKETS HERE.

Geezer
Section: Special Screenings
Directed and written by Lee Kirk. (USA) – World Premiere, Narrative.
Perry (Billie Joe Armstrong) is a happily married father of two living a comfortable but sedate life in the suburbs. On the occasion of his 40th birthday, he seeks to revisit his former life as the lead singer in a popular punk band though his middle-aged reality quickly (and hilariously) clashes with the indulgences of his youth. With Fred Armisen, Selma Blair, Judy Greer, and Chris Messina. With a special live performance from Billie Joe Armstrong following the film. BUY TICKETS HERE.

SHOT! the Psycho-Spiritual Mantra of Rock
Section: Special Screenings
Directed by Barnaby Clay. (USA) – World Premiere, Documentary.
Legendary music photographer Mick Rock is best known for his iconic photographs of David Bowie, Lou Reed, Iggy Pop, Queen, and countless others. In a documentary as rock-n-roll as its subject, Mick Rock guides us through his psychedelic, shambolic first-hand experiences as the visual record-keeper of these myths and legends. With a special live music tribute following the screening.
BUY TICKETS HERE.

The Devil and the Deep Blue Sea
Section: Spotlight (Opening Film)
Directed by Bill Purple, written by Robbie Pickering & Bill Purple. (USA) – World Premiere, Narrative.
Henry (Jason Sudeikis) and Penny (Jessica Biel) are a New Orleans couple very much in love, until tragedy strikes and Henry is forced to rebuild. Quite literally, it turns out. After he befriends a tough street teen (Maisie Williams), he helps her construct the raft she’ll use to sail across the Atlantic in search of her long lost father. With Jason Sudeikis, Jessica Biel, Maisie Williams, Orlando Jones, Mary Steenburgen, and Paul Reiser. BUY TICKETS HERE.

Vincent N Roxxy
Section: Spotlight
Directed and written by Gary Michael Schultz. (USA) – World Premiere, Narrative.
Vincent (Emile Hirsch) is a small town loner, and Roxxy (Zoë Kravitz) a rebellious punk rocker. When they find themselves on the run from the same dangerous criminals, their feelings for one another deepen, despite their dangerous circumstances. Soon, the star-crossed lovers discover violence is never far behind them, in Gary Michael Schultz’s alternately romantic and brutal drama. With Emory Cohen, Zoey Deutch, Jason Mitchell, Scott Mescudi. BUY TICKETS HERE.

Strike a Pose
Section: Spotlight
Directed and written by Ester Gould and Reijer Zwaan. (Netherlands) – North American Premiere, Documentary.
To the fans, they were the unforgettably talented men who supported the career of one of the world's most beloved and controversial music artists: Madonna. Behind the scenes they were an impressionable group of young dancers whose lives were forever changed by her influence. Strike a Pose reunites the men 25 years later, providing the chance to learn about the emotional truth behind the glamorous facade. BUY TICKETS HERE.

Bad Rap
Section: Spotlight
Directed and written by Salima Koroma. (USA) – World Premiere, Documentary.
Bad Rap follows the lives and careers of four Asian-American rappers trying to break into a world that often treats them as outsiders. Sharing dynamic live performance footage and revealing interviews, these artists will make the most skeptical critics into believers. With humor and insight, the film paints a portrait of artistic passion in the face of an unsung struggle. With Jonathan "Dumbfoundead" Park, Nora "Awkwafina" Lum, David "Rekstizzy" Lee, and Richard "Lyricks" Lee. BUY TICKETS HERE.

As I Open My Eyes
Section: Viewpoints
Directed by Leyla Bouzid, written by Leyla Bouzid and Marie-Sophie Chambon. (France, Tunisia, Belgium, United Arab Emirates) – US Premiere, Narrative.
As I Open My Eyes depicts the clash between culture and family as seen through the eyes of a young Tunisian woman balancing the traditional expectations of her family with her creative life as the singer in a politically charged rock band. Director Leyla Bouzid's musical feature debut offers a nuanced portrait of the individual implications of the incipient Arab Spring. With Baya Medhaffer, Ghalia Benali, Montassar Ayari, Aymen Omrani, Lassaad Jamoussi, Deena Abdelwahed, Youssef Soltana, Marwen Soltana. In Arabic with subtitles. Presented in association with Venice Days. BUY TICKETS HERE.

Midsummer in Newtown
Section: Spotlight
Directed by Lloyd Kramer. (USA) – World Premiere, Documentary.
Midsummer in Newtown is a testament to the transformative force of artistic expression to pierce through the shadow cast down by trauma. From auditions to opening night, we witness the children of Sandy Hook Elementary find their voice, build their self-confidence, and ultimately shine in a rock-pop version of A Midsummer's Night Dream. BUY TICKETS HERE.

ROCK AND A HARD PLACE
In this music-driven documentary shorts program we start out gently and ramp up to high-energy rock & roll.

Northbound (Mot nord), directed and written by Jørn Nyseth Ranum. (Norway) – North American Premiere.
This film shows the first attempt to bring skateboarding to the frozen sandy beaches in northern Norway. Join four of Norway's best skaters in this poetic and playful encounter with the Arctic winter. In Norwegian with subtitles.

Pearl, directed and written by Patrick Osborne. (USA) – World Premiere.
Pearl follows a father and daughter on the road together, tracing his struggles to make it as a musician and parent, and her coming-of-age and musical journey to fulfillment.

Homeland (Hemland), directed and written by Sara Broos. (Sweden) – North American Premiere.
A young woman escapes the war in Syria and ends up in the forest in Sweden. Listening to music is a way for her to survive and bring her back, in dreams and memories, to her homeland. This is a film about the power of music and the meaning of the word homeland. In Arabic, English, Swedish with subtitles.

Gift of Gab, directed and written by Michael Jacobs. (USA) – World Premiere.
Gift of Gab is a portrait of iconic artist Timothy Parker, from the seminal hip-hop group Blackalicious, whose battle with kidney disease ends up fueling the creation of their first album in 10 years.

Hold On
Section: Pressure Points.
Directed by Charlotte Scott-Wilson. (Netherlands).
A young cellist has to overcome her fears to keep her position in an orchestra. BUY TICKETS HERE.

Joe's Violin
Section: New York Then
Directed by Kahane Cooperman. (USA) – World Premiere.
A 91-year-old Holocaust survivor donates his violin to an instrument drive, changing the life of a 12-year-old schoolgirl from the Bronx and, unexpectedly, his own. BUY TICKETS HERE.

the bomb
the bomb is a groundbreaking multimedia installation that immerses you in the strange, compelling, and unsettling reality of nuclear weapons. The 55-minute film will be projected 360 degrees on massive floor to ceiling screens that surround the audience, as The Acid performs a live score in the center of the space. the bomb exists at the intersection of art, politics, and technology.