Get ready for the festival's 15th year by catching up with some of its best dramas, comedies, documentaries, and horror films from years past. 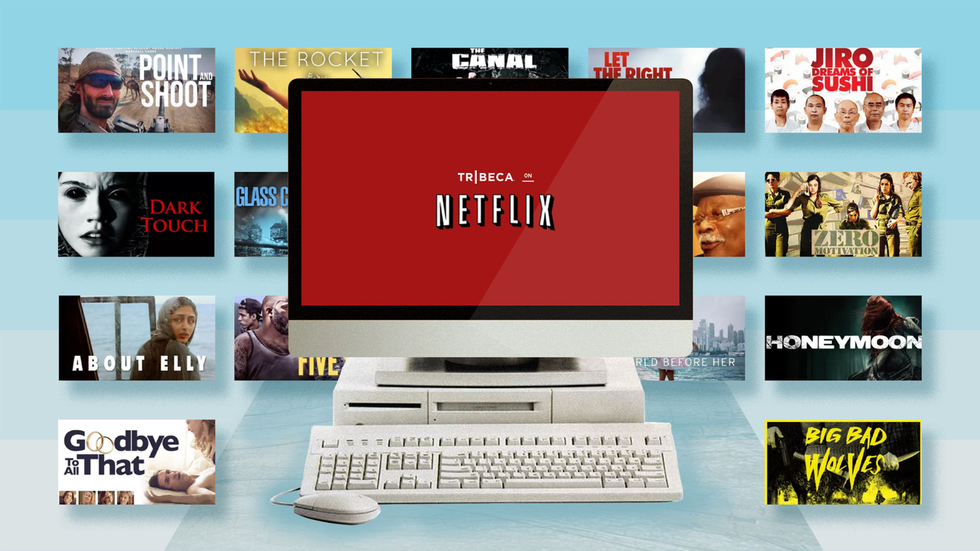 Photo Illustration by Carly Sloane and Photos by Netflix

If you live in New York City, chances are you've already marked your calendar for April 13-24, which is when the 15th edition of the Tribeca Film Festival will overtake Manhattan. That's because you’re obviously a proud cinephile, and, as such, there's no more exciting time of the year than TFF's annual week-plus run. Countless world premieres, dozens of A-list actors traveling around the city to walk red carpets and watch each other's work, people binge-watching things that aren't on their laptops—it's basically Christmas in April for NYC's cinema obsessives.

But what about everyone who’s outside of New York? They’ve never been able to attend TFF and wait on line for hours to see the new buzzed-about Olivia Wilde movie, or post up into the same room as Robert De Niro. More importantly, they've missed out on seeing a ridiculously high number of excellent independent films with crowds full of like-minded folks.

Praise be to Netflix, then, for streaming a bunch of memorable TFF flicks. Unfortunately, Netflix doesn't have a "Tribeca Film Festival" sub-category. Trying to figure out where the fest's graduates are within the site's inscrutable library is tougher than watching more than two episodes of Making a Murderer without wanting to punch a hole in the nearest wall. In an effort to keep you away from those aspirin bottles, we've curated a "15 for 15" list of memorable TFF films to prep you for the festival’s upcoming 15th installment.

Equal parts Jarhead and The Office, Israeli filmmaker Talya Lavie's feature-length debut was a breakout sensation at TFF 2014, earning the award for Best Narrative Feature in the World Narrative Competition. Anyone with a whipsmart sense of humor can see why. Zero Motivation mostly takes place inside the mundane HR department's offices on a secluded Army base, where a crew of young women do their best to combat their uneventful desk job's boredom. Saying Lavie's film is also a fusion of Office Space and Broad City wouldn't be far from the truth, either.

Today, Iranian filmmaker Asghar Farhadi is one of the most acclaimed directors in the world, thanks to the critical successes of 2011's A Separation and 2013's The Past—it also doesn't hurt that A Separation won the both Academy Award and the Golden Globe for Best Foreign Language Film in 2012. Way back in 2009, though, Farhadi's popularity didn't extend far beyond his native Iran, but then he brought the provocative drama About Elly to TFF 2009, and the international buzz built around his name. The film, which was hailed by jurors as that TFF's Best Narrative Feature, spins a web of lies, shattered friendships, and emotional devastation around a group of friends vacationing near the Caspian Sea.

One of the great things about film festivals is their ability to send attendees to corners of the world they'd otherwise never get to see. And with that in mind… Admit it, you don’t know the first thing about Laos, the Southeast Asian country known for "its mountainous terrain, French colonial architecture, hill tribe settlements and Buddhist monasteries." (Appreciate the help, Google.) Watching Aussie director Kim Mordaunt's The Rocket, though, is like taking a first-class trip to Laos minus the jet lag and bag of stale peanuts. It's about a resourceful 10-year-old boy who's forced to vacate his home, along with his dad and grandma, after the land turns into a new dam's site; his travels eventually bring him to a community where a rocket-building contest presents the chance to come-of-age amidst the Laotian outback's gorgeous scenery.

If they're not made by Judd Apatow, Hollywood's romantic comedies are, more often than not, dreadful. Fortunately, they’re much better in the indie scene, and the Tribeca Film Festival’s past filmography is loaded with shining examples of the genre. One of the most charming of those is Goodbye to All That, starring Parks and Recreation alum Paul Schneider as Otto Wall, a well-meaning guy who doesn't waste any time getting back into the dating pool after his wife requests a divorce. Written and directed by Junebug screenwriter Angus MacLachlan, Goodbye to All That is a goofy and sweet look at the difficulties of regaining one's long-dormant mojo. Feel free to call it How Otto Got His Groove Back.

Watch Goodbye to All That now

Writer-director Noah Buschel doesn't need any bells and whistles to make a compelling movie. With the impressively understated Glass Chin, he delivers an engaging and knotty little character study with nothing more than actors, elbow grease, and a camera. Corey Stoll, sans that hilarious wig he wears on FX's The Strain, is dynamite as a former boxing champ whose desperately down-and-out social status pushes him towards a shady deal with a corrupt restaurant owner (played by Billy Crudup). Murder, double-crosses, and possible jail time follow. Glass Chin is a subtle dose of vintage crime noir that feels like an old dime-store paperback come to life.

Pro tip: Watch this one before lunch or dinner. You'll be ready to eat.

Not to mention, you'll also be in a great mood. On its surface, the documentary Jiro Dreams of Sushi is a foodie's wet dream, with director David Gelb profiling 85-year-old master sushi chef Jiro Ono and his beloved 10-seat, $300-per-plate Sukiyabashi Jiro restaurant in Tokyo. Gelb details the ins and outs of how Ono and his staff handcraft every piece of raw fish and rice, and it's both hunger-inducing and highly entertaining. But that alone wouldn't justify an 80-minute film, let alone a 20-minute short. What makes Jiro Dreams of Sushi so memorable is Ono himself, a charismatic and passionate man who’s driven by a deep love for, and the motivation to pass down his proverbial crown to, his son, Yoshikazu. Jiro Dreams of Sushi is about the love of dads, heirs, and dragon rolls.

Jiro Dreams of Sushi is also available to stream on Tribeca Shortlist here.

Some of the best documentaries tell stories so multi-layered and fascinating that one can’t help but think they'd also make amazing narrative films. Point and Shoot, which was backed by the Gucci Tribeca Documentary Fund in 2013, is the epitome of that. With the right leading actor, the fictionalized version would be Oscar gold. Matthew VanDyke, an insecure Baltimore guy with disabling OCD, followed up his college graduation by, in no order of importance or wow-ness, was an embedded journalist in Iraq, motorcycled across the Middle East and North Africa, took part in the Libyan revolution, and fought with Libya's rebel army against Gaddafi. Imagine Tom Hardy or Jake Gyllenhaal playing a character like that. Well, with the remarkable Point and Shoot, director Marshall Curry captured the real thing.

The World Before Her (TFF 2012)
Director: Nisha Pahuja

With all the necessary talk about gender equality here in the stateside entertainment industry lately, it's easy to lose sight of the fact that women all around the globe are dealing with the same issue, if not to far worse degrees. In the captivating documentary The World Before Her, a 2011 Gucci Tribeca Documentary Fund grantee, filmmaker Nisha Pahuja analyzes India’s perspectives on its women citizens through two wildly different points of view. On one side, Pahuja focuses on two young ladies competing in the Miss India pageant mainly in hopes of receiving the kind of societal empowerment their country doesn't generally offer their gender; on the other, the director spends time among the women involved with the Hindu fundamentalist movement, which couldn’t be any further removed from the beauty queen scene.

Watch The World Before Her now

Tribeca has a strong affinity for music-driven documentaries, as evidenced by recent premieres like The National's Mistaken for Strangers (TFF 2013), the Nas-centered Time is Illmatic (TFF 2014), and Mary J. Blige - The London Sessions (TFF 2015). While those films gained more attention because of their star power, the smaller-scale Keep On Keepin' On is just as deserving of their accolades and views. Produced by Quincy Jones, it's a heartwarming look at the friendship shared between 23-year-old blind piano prodigy Justin Kaulflin and 89-year-old jazz legend Clark Terry, who'd previously mentored Miles Davis and the aforementioned Jones. Keep On Keepin' On isn't unlike Ryan Coogler's Creed, with Terry battling through failing health as Justin preps for a potentially career-defining performance.

Watch Keep On Keepin' On now

A modern-day horror classic, Swedish director Tomas Alfredson's adaptation of John Ajvide Lindqvist’s subversive 2004 vampire novel couldn't have arrived at a better time in 2008. The credibility of those bloodsucking creatures of the night, long one of the horror genre's reliably effective staples, had been diluted by the Twilight franchise's glistening me vamps. But then Alfredson's beautifully shot, sufficiently creepy, and surprisingly touching film proved that new life could be breathed into Dracula's cinematic descendants, reinventing vampire mythos through the love story of a bullied pre-teen boy and his new undead friend.

Let the Right One In snagged the Best Narrative Feature prize at TFF 2008. It's the only horror film to do so thus far.

Watch Let the Right One In now

With only two features to their credit so far, Israeli genre lovers Aharon Keshales and Navot Papushado are already Tribeca royalty. Their debut, Rabies, was one of the 2011 festival's Midnight section's (then called Cinemania) high-points, cleverly turning the slasher genre's on its machete-sliced head, and the co-directors returned to TFF two years later with an even more impressive genre mash-up. A crafty riff on crime thrillers and serial killer cinema, Big Bad Wolves uses the horrific murder of a little kid to send a pair of middle-aged protagonists straight into the heart of darkness. It's disturbing, emotional, and, not unlike Rabies, often darkly hilarious. And it's also Quentin-Tarantino-approved.

Women directors haven't had it easy in the horror and sci-fi genres—hell, they haven't had it easy in any genre. But specifically in horror, it's been a tough road, though the last few years have seen the fairer sex make great strides towards notoriety and ubiquity. One of the best recent female-made genre flicks is Leigh Janiak's Honeymoon, an unpredictable blend of romance, body horror, and extra-terrestrial intrigue. It’s also a great showcase for a couple of underrated TV actors: Rose Leslie, a.k.a. Jon Snow's lover Ygritte on HBO's Game of Thrones, and Harry Treadaway, who's excellent as Dr. Frankenstein on Showtime's Penny Dreadful.

Brace yourself for the hands-down creepiest movie to ever hit the Tribeca Film Festival. Justifiably dubbed by various horror outlets as "the Irish Sinister," writer-director Ivan Kavanagh's The Canal is the kind of scary flick that's so rarely made these days: a legitimately scary one devoid of any comic relief or sporadic levity. Rupert Evans (Hellboy) is top-notch as a film archivist whose family moves into a new home that just so happens to be the site of gruesome turn-of-the-century multiple homicide case. In addition to Sinister, there are touches of The Amityville Horror, Japanese ghost flicks like Ringu, and the in-your-face gore one would find in a Rob Zombie movie. Altogether, it's a first-class shocker.

Creepy kid movies are always in vogue, but they're also hardly ever good. For every flick like Richard Donner's 1976 classic The Omen, there are at least five movies on par with the abysmal 2006 remake of The Omen. Dark Touch is one of the better ones. French filmmaker Marina de Van recaptured the greatness of her criminally underrated 2002 body horror knockout In My Skin with this bleak yet thematically poignant look at the ramifications of child abuse, as filtered through the supernatural sensibilities of Stephen King's Firestarter.