These eight Tribeca X finalists represent the best artist-brand collaborations of the past year. 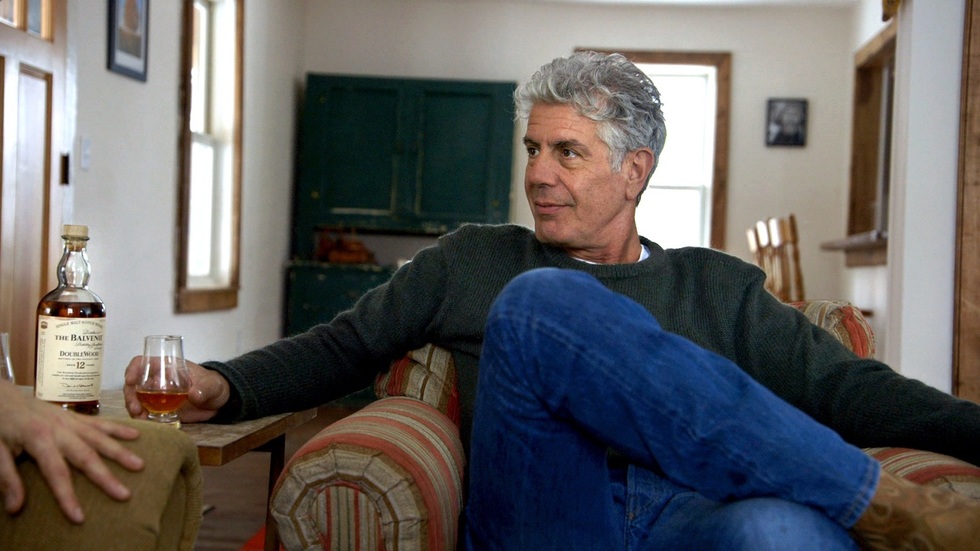 Anthony Bourdain in RAW CRAFT WITH ANTHONY BOURDAIN, one of the eight Tribeca X Award finalists.

As companies and brands like Netflix, Amazon, and even Chipotle establish themselves as formidable destinations for storytellers, the lines between advertising and entertainment continue to blur. It's now all about the best stories and strongest films, no matter how they're conceived. With that in mind, Tribeca 2016 will introduce an all-new platform for works that exemplify the best that branded storytelling has to offer: the Tribeca X Award, sponsored by GE. Today, the Festival has announced the eight finalists, including actor turned documentarian Michael Rapaport, Tangerine director Sean Baker, and Wet Hot American Summer co-creator David Wain, and dynamic brands like American Giant, Samsung, and Derek Lam.

"Brands have a great tradition as inspired storytellers," said Andrew Essex, CEO of Tribeca Enterprises. "As new technologies such as ad-blocking and over-the-top television make it harder than ever for command-and-control-style advertising to succeed, genuine entertainment and authenticity have become increasingly important qualities for cutting through. The Tribeca X was conceived to celebrate brands that aspire to tell engaging stories that add value to people's lives, rather than advertising that creates pollution."

The winner, which will be announced at the TFF Awards Night ceremony on April 21, will be chosen by the five Tribeca X Award jurors: Laurie Anderson, Scott Carlson, Judy McGrath, Liev Schreiber, and Hank Willis Thomas. Their options include a documentary about a world-famous Los Angeles boxing gym, an online docu-series that follows Anthony Bourdain, and a psychological drama about a paranoid New York City man.

"We saw a mix of narrative and documentary and series of varying lengths in the submissions," said Genna Terranova, Festival Director. "This model of story production, if done authentically with the artist empowered, has tremendous potential. The finalists reflect the quality and the spirit of independent storytelling we were looking to find."

The eight Tribeca X finalists are:

• American Giant X Wild Card Boxing
Brand: American Giant
Directed by Michael Rapaport
American Giant x Wildcard Boxing is a five-minute branded content mini-doc told in a lyrical yet gritty style that complements the look and feel of the gym about the far-reaching influence of Freddie Roach and his iconic Wildcard Boxing Gym in Hollywood, CA. Through interviews with Roach and numerous boxers who train there, viewers get a sense of both Wildcard's rich legacy and the community that Roach has sought to create since the gym's inception.

• Hearing Colors
Brand: Samsung
Directed by Greg Brunkalla
The life of Neil Harbisson is like something out of a sci-fi novel. Neil was born with achromatopsia, a rare condition that leaves 1 in 30,000 people completely colorblind. But Neil isn't colorblind, far from it. After convincing his doctors to implant an antenna into the back of his head, Neil now possesses a new sense: the ability to hear colors. In this short film by Greg Brunkalla, Neil takes you through a day in his life and into an entirely new world.

• The Irrational Fear of Nothing
Brand: Olympus
Directed by Paul Trillo
Follow behind the back of a paranoid, neurotic man named Terry as he wanders through the streets of Manhattan. Past memories and his irrational inner thoughts soon plague his every move. By channeling a form of mental time travel, he attempts to overcome these past anxieties. Executive produced by Vimeo.

• Raw Craft with Anthony Bourdain
Brand: The Balvenie
Directed by Rob Meyer
Legendary author, TV host, and raconteur, Anthony Bourdain brings us Raw Craft—a new original online film series that took viewers on a journey of discovery, unearthing captivating and emotional human stories of true craftsmanship in America. Similar to the rare craft of whisky making, the series introduces audiences to people who still choose to do things the old way—or as Bourdain lovingly describes it, "the slow, stupid way."

• Second Sound Barrier
Brand: Robert Graham
Directed by David Wain
Three fastest men in the world with nothing in common are summoned to a mission; save the beautiful recluse—Lady Billionaire—from a mysterious illness. How? By driving faster than anyone has driven before. Why? To break the second sound barrier.

• Snowbird
Brand: KENZO
Directed by Sean Baker
From acclaimed writer/director Sean Baker (Tangerine), Snowbird stars Abbey Lee in her latest role since appearing in the blockbuster Mad Max: Fury Road. Abbey Lee plays, Theo, a young woman living in the remote California desert community, Slab City, a place in which residents live off the grid. The film follows Theo over the course of a day, as she goes door to door, sharing a cake she baked with her colorful neighbors.

• Taking Flight
Brand: Radio Flyer Wagons
Directed by Brandon Oldenburg
Taking Flight is a short film inspired by the life and heritage of Antonio Pasin, inventor of the Radio Flyer wagon. In this fictional tribute to Pasin's legacy, what begins as a small boy’s over-scheduled, over supervised, boring day with Grandpa turns into a larger-than-life journey, narrowly escaping wild monkeys and battling aliens to save the universe. Through the power of imagination and epic adventure, a boy learns to be a kid, a father learns to be a dad, and a grandfather reminds us all what childhood is about.

Advance selection ticket packages are now on sale. All advance selection packages can be purchased online at tribecafilm.com/festival/tickets, or by telephone at (646) 502-5296 or toll free at (866) 941-FEST (3378).

Single tickets cost $20.00 for evening and weekend screenings, $10.00 for weekday matinee screenings, and $40.00 for Tribeca Talks panels and special screenings. Single tickets are now on sale and can be purchased online, by telephone, or at one of the Ticket Outlets, located at Bow Tie Cinemas Chelsea (260 W. 23rd Street), and Brookfield Place (250 Vesey Street). The 2016 Festival will offer ticket discounts on general screenings and Tribeca Talks panels for students, seniors and select downtown Manhattan residents. Discounted tickets are available at Ticket Outlet locations only.