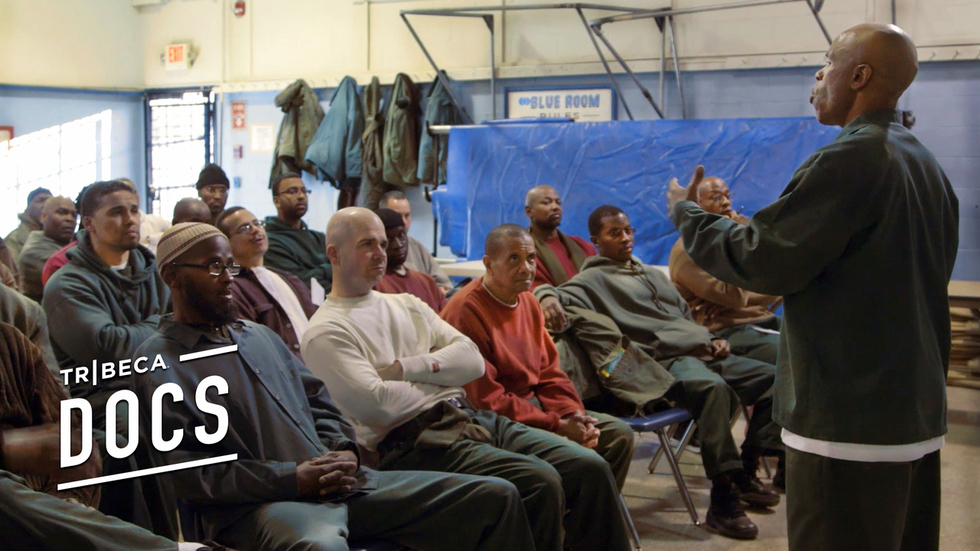 It's a new day for thousands of men and women stuck behind bars.

In an effort to decrease widespread prison overpopulation and lessen the resulting heavy price tags, the United States Sentencing Commission recently found a positive solution to the issue: drug sentences are being heavily reduced. The move comes in response to the extreme federal penalties tied to America's war on drugs. President Barack Obama is on-board, too, having pushed criminal justice reform to the top of his agenda. So far, the statistics are no joke: In early November, more than 6,000 federal inmates were released early.

With one fix, though, always come another problem. The fact that so many prisoners with lower-level offenses are returning home sooner is worthy of applause, but what happens once they’re outside their respective jail's quarters? Are they ready for the real world’s harsh truths and often cold-shouldered demeanor? Will they emerge more scarred than when they entered? Is their PTSD bubbling underneath surface? Due to the prison system's lack of proper guidance, inmates trying to make a successful "reentry" into the civilized world are far too often ill-prepped and, at an alarming rate, quickly go back to their illegal ways and, in some cases, either end up back in the clink or buried six feet beneath the dirt.

Vee Bravo, the VP of Education at Tribeca Film Institute (TFI) has a plan to help their re-assimilation become a success. Since 2011, when he started working for TFI, Bravo has overseen a unique and hugely beneficial film screening series inside the Otisville State Prison, located in Upstate New York. Twice a month, Bravo shows a film to a group of Otisville inmates and immediately follows the screenings with discussion time, during which elder inmates, or "facilitators," organize group conversations about a theme derived straight from the day’s movie. "Out in the free world, you may see a poignant film, talk about it with your friends over burgers, but then you get on the train home or whatever, and that's it," says Bravo. "But when you structure conversation and make it fun and engaging, you can do serious work. You can get people to really rethink how they look at themselves and how they look at their neighbors."

The exclusive short documentary above, produced by TribecaFilm.com and TFI, encapsulates what makes TFI and John Jay College's screening series so special. The film follows Devon Simmons, who left Otisville in October 2014 after a 16-year bid for an assault charge. Inside the facility, Simmons was a regular standout attendee at the screenings, and since his release, he's enrolled in Hostos Community College and is co-writing an original movie screenplay with a friend who's still locked up inside Otisville. "Devon stuck to his game plan," says Bravo. "He was aware of all the potential distractions and made a decision on the outside to stay on course. If anybody believes in rehabilitation, sign Devon up to be the model."

Bravo first started working with inmates back in the mid-'90s, when he was an editor for the hip-hop magazine Stress. The mag constantly received an outpouring of letters from men in prison who responded to its socially conscious fusion of rap and community; to show his appreciation, Bravo brought artists like Fat Joe, Big Pun, Wu-Tang Clan, and Mobb Deep to Rikers Island for private concerts, and it didn’t take long for him to see the impact. He eventually took it a step further and utilized a mostly unused projection screen on Rikers' grounds to show hip-hop documentaries like Wild Style (1983) and Style Wars (1983), and taught media literacy workshops to the inmates.

By the time Bravo started at TFI, he was ready to turn his Rikers experiences into a full-time priority, namely with the help of friend and colleague Baz Dreisinger, who's an English professor at John Jay College. Dreisinger is the brains behind John Jay's NYC Prison-to-College Pipeline, a program in which the incarcerated are given an opportunity to earn Associate's or Bachelor's degrees by taking an accredited course. In 2013, Dreisinger voiced a concern about her Pipeline initiative to Bravo: "There's a void here," said Dreisinger, "because the men who've already earned their BA's or Master's, there's nothing we can offer them after they get their degree, and they still have 10-15 years left on their sentences. Can you offer them anything?'"

Bravo's idea was simple: let those degree-holding and more experienced inmates act as in-house film programmers. The Otisville screening series was born. "I told her, 'We can train the men through a certificate program on how to become effective facilitators,'" recalls Bravo. "They curate films according to the needs of the population, and a lot of their needs are processing family relationships, processing wrongful acts that they might have committed, but also their love for music, art, and culture. They're able to use cinema to process those feelings and emotions alongside their fellow inmates." To date, they've shown a wide range of films, from Spike Lee's Do the Right Thing to the Nas documentary Time is Illmatic and the 2007 Oscar-nominated French-Iranian-American animated drama Persepolis.

The mission hasn't been relegated to Otisville's walls. Early this year, Bravo connected with documentarian Stanley Nelson (The Black Panthers: Vanguard of a Revolution) and his team on a project that's giving Otisville's film-loving inhabitants the chance to become teachers and storytellers themselves. The inmates are currently writing an educational study guide to accompany Nelson's 2014 documentary Freedom Summer, about the deaths of civil rights workers in Mississippi in the hot months of 1964. "Stanley jumped at the idea,” says Bravo. "Who's better than people who’ve lost their freedom to write about civil rights, as opposed to people who are free telling young kids about the power of being free? Why don't we just put it in the hands of people who are no longer free?"

The same people who've benefitted immensely from the Otisville screening mission. Here, Bravo looks beyond Simmons' triumphant journey to discuss, in a larger scope, what makes the screening program a singular method of rehabilitation and how cinema can be an inmate's savior.

The One-of-a-Kind Power of Film
"There are a lot of worthwhile organizations who understand the power of art as therapy and as an intervention in your life. It creates a safe space; it creates a safe domain to tell a story, share that story, and have ownership of your story and make your story relatable to other people. In the United States, there's plenty of evidence of worthwhile organizations that have done that, with theater, drama; there are some interesting radio programs coming out of prisons on the West Coast, too."

"There are also a lot of programs out there that help inmates express themselves through poetry, which is wonderful, but our film program allows the men to invoke a particular perspective into educational tools. In other words, it creates a space for the people who are incarcerated to write the chapter on incarceration in the history book. With the curriculum writing program, specifically, we can create a real sustainable capacity. This isn't a one-off; this isn't like a book of poems that a dude shares once with his poetry class and then it gets buried on the shelf. Freedom Summer is a film by a well-known PBS producer that has distribution, and there's a space for us to supply educational materials and for the prisoners themselves to write those materials."

"It affirms that they've existed outside the confines of being in prison. That's powerful. If you have kids or family members who don't get to see you, now they can see you in a different way. It's not just like 'my uncle' or 'my dad' who's a prisoner—it becomes 'my uncle' or 'my dad' who worked on this really cool and special project that will help people for years to come."

"When we showed JR's Inside Out project, they did a post-screening activity where they all counted all the years that they'd already done in that room. There were maybe 35 men in the room, and they collectively counted that they'd done about 800 years total already. And then one of the dudes who'd done maybe five years stood up and thanked our facilitators, who'd collectively done around 90 years at that point, for being so open, so respectful, and so welcoming, 'Because me coming in here as a new dude who's only done five years, I feel like I can't approach you, since I'm not at your level, but you're creating an environment here where we can talk and you can help me.' I was like, 'Wow, this is so great.'"

Film Lovers All Speak the Same Language
"Whenever I go up to Otisville, it's like a new learning experience for me. We screened the TFI-funded film (T)ERROR and while we're playing the film, it's revealed that the main character is an FBI informant, and you hear dudes gasping and talking to the screen in shock. Come to find out, these are dudes who did time with him in Attica back in the '80s and are still in prison, and they didn’t know that he'd become an FBI informant. It puts things into context and shows you how long some of these men have been in prison."

"The film we showed after (T)ERROR was my 2009 film, Estilo Hip-Hop, about hip-hop culture in Latin community, and then we showed the documentary The Crash Reel. I'm really psyched that we went from a documentary about an FBI informant in the Muslim American community to a doc about hip-hop in Cuba to a film about snowboarding. [Laughs.] We brought the snowboarding community from Vermont into the prison, and our facilitators had the dope idea to discuss what it means to take a risk, in relation to the snowboarders in the film."

"The Crash Reel is about this snowboarder who's on top of the world but has a crazy accident, but despite that, he still wants to go out and race even though he has a concussion and the doctors are telling him that one more hit to the head and he's done, and he won't hear that. The facilitators aligned it to the shit they go through on the streets. When you're on the streets, you're at the top of your game, right, but then you get pinched and you get sent to prison but you still have that old mentality and can’t accept that you have to do 15 years inside."

"They took a snowboarder's fight with traumatic brain injury and made it relatable to street culture, man! You had these two white snowboarders from Vermont, with the cool hippie vibe, hanging out with the brothers inside Otisville. That was this program's power in action, right there in front of everyone."

The prison work is part of the TFI Education department's larger effort to bring film to underserved communities in New York City.