A Filmmaker's Perspective on Using Tugg to Create Event Cinema

Joe Bailey, Jr. sizes up independent theatrical distribution and the arrival of Tugg via a case study of “Incendiary: The Willingham Case,” the award-winning documentary he co-directed with Steve Mims. Movie fans are reclaiming power; rejoice! 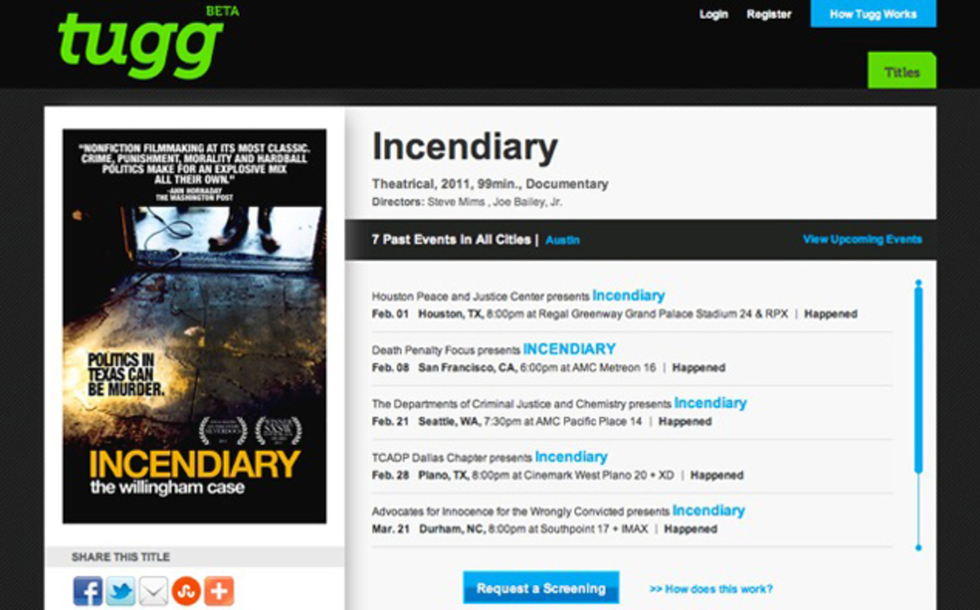 Editors’ note: Every filmmaker wants his or her work to be seen on the big screen, but it’s not always possible for titles without big-budget marketing or studio support. In recent years, crowd-sourcing has become a critical factor in the theatrical distribution process for certain types of independent films. Crowd-sourcing platforms have offered audiences a way to demonstrate to theater owners their appetite for movies outside the multiplex matrix—basically, the opportunity to put their money where their mouths (movie tastes?) are. The result? More theatrical options for film fans who don’t happen to live in the major markets.

Joe Bailey, Jr. (with his directing partner Steve Mims) has had ongoing success in using the platform Tugg to screen his documentary INCENDIARY: The Willingham Case in theaters around the country. In the first of a series about the various platforms, we asked Bailey for a first-hand account of his experience.

We realize Tugg is not the only platform offering crowd-sourcing tools for filmmakers. In the weeks to come, we will follow up with additional case studies of the various platforms, allowing readers to decide for themselves which platform best suits their needs.

I agree with Anthony Kaufman and Anthony Lane: great films should be seen on the big screen—particularly “art” and niche films—which is why you’ll often find me at the Violet Crown in Austin, with a local brew, about to see a new doc or foreign masterpiece. But I also can vouch a little for Magnolia Pictures’s Eamonn Bowles’ perspective: “‘Platform releasing,’ where you opened in a couple of theaters and hoped to expand later, was a recipe for disaster. The paradigm was broken, so we had no choice but to hit on something that made sense,” Eamonn told The Wrap.

Tugg is reclaiming the best of modern technology—the internet’s mind-shattering crowd-sourcing power, the innovations of digital exhibition and delivery. The intimidating, harsh economic waters of theatrical are now navigable to filmmakers, independent-minded audiences, and theater owners, who can count on those who book advance tickets online to fill seats that might otherwise go empty.

Established filmmakers like Morgan Spurlock are harnessing Tugg to open a film in theaters to rapt, engaged audiences who love the cinema experience. Huge cinemas in the Heart of the City, or Suburbia, or Rural America can again play the classic, the niche, the obscure, the offbeat—at no financial risk to cinemas, corporate shareholders, audiences or content owners.

My introduction to Tugg came the opening weekend of our film’s traditional limited theatrical release. INCENDIARY: The Willingham Case was playing at Austin’s Violet Crown Cinema. At the cinema bar after the show, The Tree of Life producer and Tugg co-founder Nicolas Gonda kindly introduced himself. He mentioned something new he’d like to talk to co-director Steve Mims and me about—an idea that would become Tugg.

INCENDIARY’s world premiere at Austin’s historic Paramount Theater at SXSW 2011 looms large in my memory, and always will. The film performed well in its limited runs in NY and DC, and in a month-long run in Austin. Our runs in LA and Dallas? Kinda rough. A glowing, A1-page-listed, opening-day review of INCENDIARY in the Dallas Morning News heralded... the chirping of box office crickets.

Lesson learned from the helm of an indie release: it’s tough being a distributor of independent, art and documentary film. We received a dozen interviews on national television and radio, positive reviews from film writers whom we adore, features in print editions of institutions like The Washington Post, and analysis by some of online journalism’s sharpest. In short, Truly Indie’s Kelly Sanders was sensational in getting us great bookings; our publicists were incredible in steering us through myriad press inquiries. But translating all of that exposure to the box office was a hit and miss game.

A Season for Tugg

Cut to May 2012. Months after what we assumed was the autumn of INCENDIARY’s theatrical life, things were looking more like spring. A solid social media presence on Facebook and Twitter allowed us to use Tugg to pose the open question: Would you like to see INCENDIARY in your local cinema? The response has been life-affirming.

1. A filmmaker contacts Tugg at films@tugginc.com to get his or her film added to the library.

3. The host then picks a time and date; Tugg coordinates with the local theater and launches an event page through which audiences can purchase tickets for the screening.

4. The host, sometimes with the filmmakers’ help, gets the word out online through Facebook, Twitter, email, etc.

5. Audience members book tickets, and the screening is confirmed—once it passes the ticket threshold that covers all the costs associated with the screening (filmmaker fee, venue fee, shipping, etc.).

6. Revenue from Tugg screenings are split between the theater and content owner, with a margin for Tugg.

What are the benefits of crowd-sourcing your way into theaters?

1. Audience control enables spontaneous ‘event’ cinema. With Tugg, audiences across the country have brought INCENDIARY to big screens in San Francisco, Seattle, Boston, Houston, Durham, and back to Dallas and Austin. More showings are in the works.

2. The atmosphere: the packed-house anticipation of an opening-night crowd—often complete with impassioned Q&A—meets the large screens and stadium seating that audiences have come to expect.

3. Projection: one of the sneaky-cool features of Tugg is seeing your film projected on the best 2K and 4K digital projection that your local megaplex has to offer.

5. Specialized audiences: Seattle University’s Departments of Criminal Justice and Chemistry, the Innocence Project Northwest, and Death Penalty Focus are screening  INCENDIARY to packed auditoriums—making them able to discuss the film’s import in public life. Few things are more validating than seeing your work animate other people to think and to act.

Audiences want content how they want it, when they want it. And as content creator-owners, we must give it to them that way—while politely reminding them: The cinema is where it’s at. Tugg puts the keys to the projection booth in our own hands, as audiences and independent filmmakers: we have the power to put worthy films back onto big screens.

Through Tugg, giant screens, previously the exclusive domain of superheroes and starlets, now flicker with the bright eyes of INCENDIARY's Dr. Gerald Hurst, fire scientist, at twenty-four frames per second. Inventor of the mylar balloon and kinepak explosive, Dr. Hurst is perhaps the most authentic superhero the real world has to offer innocent people released from prison by his volunteer analysis.