Bill Bellamy, Steven Michael Quezada and More Hit the Stage For Stand-Up Comedy at the Festival

The funniest comedians on TV are bringing their acts to the Tribeca stage. 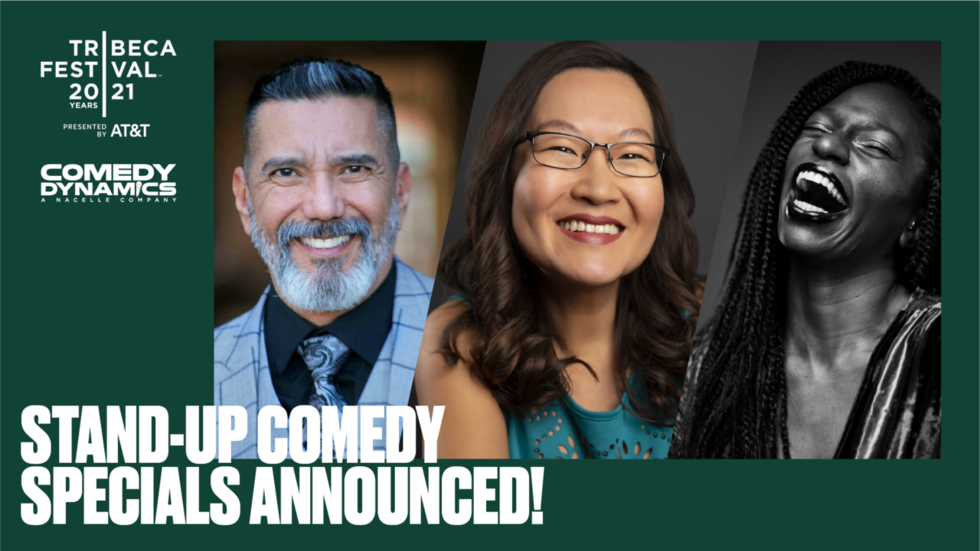 Get ready for more laughs at Tribeca Festival. In partnership with Comedy Dynamics, we’re producing 10 stand-up comedy shows from June 12-17. As COVID restrictions lift, we’re looking forward to welcoming fans to Spring Studios to watch their favorite comedians a little more intimately than the past few months.

“We had a blast working with the amazing team at Tribeca for our 2020 Comedy Drive-In at the Rose Bowl and we’re excited to be taking the show back to New York City in 2021 to give fans a bigger, better and more interactive experience,” said Brian Volk-Weiss, Founder and CEO of Comedy Dynamics.

This year, audiences will be treated to hour-long sets from the most diverse and entertaining figures in the business: Bill Bellamy, Helen Hong, Kellen Erksine and more. Collectively, they’ve appeared on everything from Breaking Bad to The Arsenio Hall Show. If you miss this funny bunch delivering quick-witted punchlines and hilarious anecdotes in person, their appearances will be taped for later viewing.

A complete list of comedians and performance dates below:

Bill Bellamy – June 12 – 8:30pm & 10:30pm – Spring Studios
Bill Bellamy is a comedian and actor who has been featured on HBO’s Def Comedy Jam, MTV Jamz, MTV Beach House, Last Comic Standing, Hot in Cleveland and more. Bill has several acclaimed stand-up specials under his belt, including Booty Call, Ladies Night Out and Crazy, Sexy, Dirty. Bill is also the host and EP of Bill Bellamy’s Who’s Got Jokes, which has featured rising comedians in their early days, including Tiffany Haddish, Lil Rel Howery and Karlous Miller.

Cocoa Brown – June 17 – 8:30pm & 10:30pm – Spring Studios
Cocoa Brown is a comedian and actress who has appeared on Showtime at the Apollo, One Mic Stand and BET’s ComicView. She’s also appeared in Tyler Perry’s series, For Better or Worse and comedy films such as, Ted 2 and The Single Mom’s Club. In addition to her comedic roles, Cocoa has showcased her acting talents on dramatic series such as Fox’s 9-1-1 and FX’s The People Vs. O.J. Simpson: American Crime Story.

Helen Hong – June 16 – 10:30pm – Spring Studios
A fan favorite on the hit NPR podcast Wait Wait Don’t Tell Me, Helen Hong is a recurring character on HBO’s Silicon Valley, CBS’s The Unicorn and Netflix’s Huge in France. She’s performed standup comedy on The Arsenio Hall Show, Last Call with Carson Daly, Comics Unleashed with Byron Allen and the Just For Laughs comedy festival in Montreal. Helen was featured in the Coen Brothers’ film Inside Llewyn Davis, and has guest-starred on Jane the Virgin, Parks and Recreation, and Pretty Little Liars.

Maija DiGiorgio – June 16 – 8:30pm – Spring Studios
Maija DiGiorgio is recognized by New York's Time Out Magazine as one of "the freshest, funniest, unique voices to grace the microphone". Maija has been featured on HBO Def Comedy Jam, Hot 97, NBC's Comics Unleashed, HBO's Sex & The City, Uncontrolled Comedy Hour and more. Maija received a standing ovation on her first television appearance on NBC’s Live from the Apollo and never stopped touring since, including several tours to serve our troops stationed overseas in Korea, Okinawa, and Japan.

Josh Gondelman – June 13 – 8:30pm – Spring Studios
Josh Gondelman is a writer and comedian who incubated in Boston before moving to New York City, where he currently lives and works as a writer and producer for Desus and Mero on Showtime. Previously, he spent five years at Last Week Tonight with John Oliver, where he earned two Peabody Awards, four Emmy awards, and three WGA Awards for his work. Josh’s debut essay collection, Nice Try, was released in fall 2019 through Harper Perennial. In the past, Josh has written for Fuse TV’s Billy On The Street. Onstage, Josh charms audiences using his good-natured storytelling and cracks them up with his sharp, pointy wit. He takes topics from surprise parties to his experience teaching preschool and makes them all equally hilarious. In 2016, he made his late night standup debut on Conan (TBS), and made his network TV debut on Late Night With Seth Meyers (NBC) in 2018. He has also appeared on The Late Late Show with James Corden. Josh’s album Dancing On a Weeknight was released April 2019 on Blonde Medicine Records and hit #7 on the Billboard comedy chart. His previous comedy album Physical Whisper debuted in March of 2016 at #1 on the iTunes comedy charts (as well as #4 on the Billboard comedy chart) and stayed there for…well…longer than he expected, honestly.

Miz Cracker – June 13 – 10:30pm – Spring Studios
Miz Cracker is a New York City drag queen, writer and comedienne. She launched her drag career in 2011 while participating in marches for marriage equality in Times Square. She went on to compete in RuPaul’s Drag Race Season Ten, landing a spot in the top five and becoming a fan favorite. She now tours the world with her one woman shows; delights fans on her YouTube channel; lectures on drag at top universities; cooks with Bon Appetit; writes for publications like Slate, ArtForum, Vice and GQ; and engages over a million followers on Instagram and Twitter. Cracker describes herself as a “woman’s lifestyle brand,” and is a vocal advocate for women’s rights. Her forthcoming solo show, American Woman, discusses how drag queens and gay men can become better allies to women in an age when Feminism is more important than ever.

Kellen Erskine – June 14 – 8:30pm – Spring Studios
Comedian Kellen Erskine has appeared on Conan, Jimmy Kimmel, NBC’s America’s Got Talent, and the Amazon Original series, Inside Jokes. He has garnered over 30 million views with his clips on Dry Bar Comedy. In 2018 he was selected to perform on the coveted “New Faces” showcase at the Just For Laughs Comedy Festival in Montreal. Kellen was named one of TBS’s Top Ten Comics to Watch in 2017, and he performed at the Bridgetown, Big Sky, and Boston Comedy Festivals. In February 2018, Kellen made his late night TV stand-up debut on TBS’s Conan.

Katrina Davis – June 14 – 10:30pm – Spring Studios
Katrina Davis is a stand-up from Jacksonville, Florida who sprang onto the Los Angeles comedy scene with a few 60-second sets on Kill Tony. She took on enough contenders in Roast Battle at The Comedy Store to be ranked amongst the top 50 battlers in 2018 and can been seen on America’s Got Talent as well as the Seed & Spark comedy special Everything is Fine. Katrina performs at shows regularly all-around LA and was honored to be named one of Time Out LA’s Comics to Watch for 2019. During the pandemic, Katrina has been featured on many online comedy shows and even hosts her own monthly Zoom show called Valley Girl. Most recently Katrina can be seen on Amazon Prime’s Fact Check digital series and heard as a voice of a couple characters on YouTube’s Swipeothesis.

Jackie Fabulous – June 15 – 8:30pm – Spring Studios
Comedian Jackie Fabulous captured America’s heart as a semi-finalist on the 2019 season of America’s Got Talent. She’s a hilarious and affable stand-up comedian, writer, actor, producer, motivational speaker, and headliner who uses her jokes and sparkling nature to simultaneously entertain, encourage, and empower audiences while keeping them laughing, and easily navigating the comedy gamut from family friendly to naughty. Jackie’s standup has been featured on The Arsenio Hall Show, Gotham Comedy Live, FOX, BET, Last Comic Standing, Kevin Hart's LOL Network and more. In addition to her television appearances, Jackie Fabulous is a paid regular and headliner at several top comedy clubs such as The Comedy Cellar, The Hollywood Improv, The Laugh Factory, and Funny Bone clubs.

Steven Michael Quezada – June 15 – 10:30pm – Spring Studios
Steven is best known for his role in the hit series, Breaking Bad and Better Call Saul, while also appearing in films such as Kites, Beerfest, First Snow and 3 From Hell over his career. In addition to his acting work, Steven performs stand-up comedy across the country and also performs regularly on Carnival Cruise Lines.

Buy Tickets to Watch These Hilarious Comedians In Person