Can Documentary Films Save Newsweeklies? 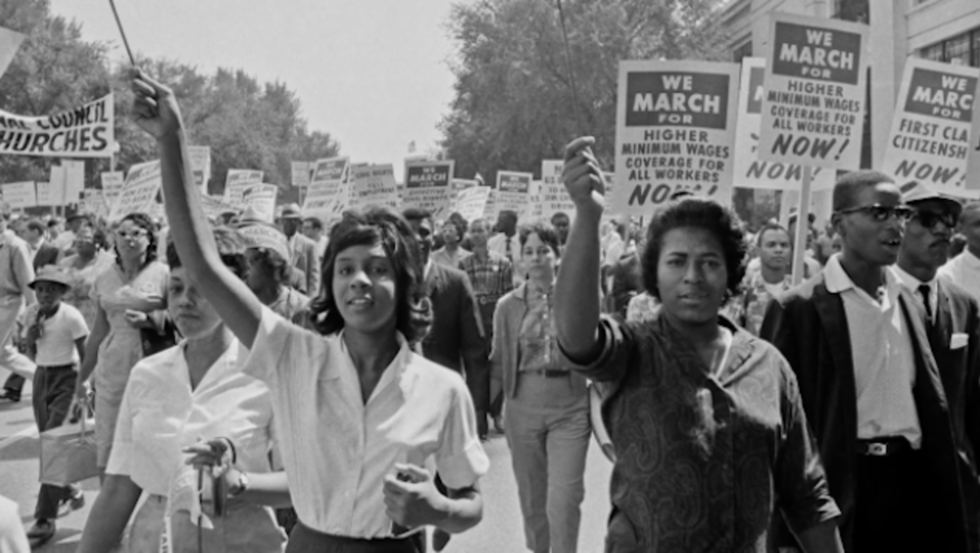 There was, once upon a time, a remote era when the cover real estate of Time magazine automatically established one in American culture as a celebrity. Nowadays anyone with a reality show and/or an unusual occupation can be famous, and the newsweeklies as gatekeepers have lost a lot of their relevance in today's society. So what is left for these struggling magazines, seeking to inform their shrinking audience that appears to be more interested in being entertained? How about documentary films? The best journalism schools in the country are already offering courses in documentary filmmaking. I, for one, would love to see what a New Yorker-produced documentary might look like (not that The New Yorker itself is struggling). Wouldn’t you?

Time recently started a documentary unit called Red Border Films, named after the iconic red borders of the magazine -- and the strategy sounds like a good fit. At the outset Time will produce one ten-minute film a month, then two longer projects a year. If the longer projects sound like documentaries, that’s because they are. Time partnered with CNN and HBO to produce documentaries on the tenth anniversary of September 11, broadcasting their brand of print journalism – in words and images -- to an audience in an interesting visual form. “That was a really successful project where it was about journalism and it was about world histories,” Kira Pollack, the executive producer of Red Border Films told The New York Times earlier this month.

Newsweek/DailyBeast, FT, US News and all the others might want to try this approach. Here are five reasons why.

1. Documentaries are the Next Logical Step

Legacy print media companies are, on the digital side, getting more and more into the production of video content in the hunt for greater engagement with their audience. The Wall Street Journal online, for example, is virtually a mini-television network. A cable network, that is, as they recently unveiled paid subscription YouTube channels. The Financial Times has had compelling video content for a while that is, in many ways, indistinguishable from a cable business news program. So why not take the logical next step, as many digital properties are presently doing in the video space, and launch documentary units?

It is no surprise that many former journalists - Sebastian Junger comes to mind - are getting into more visual mediums to tell their stories to the widest possible audience.

What makes a good documentary? Compelling storytelling, photography, good editing -- all of these components are also present in good news magazine feature stories. An excellent cover story at, say, Newsweek could, ideally, become a Oscar contender for Best Doc. All that's really missing in news magazines re: documentary filmmaking is the technical -- the sound, the lighting -- that they're already developing with these digital videos.

And if you've had the misfortune to watch a poorly-executed documentary film in the past few years, particularly as part of the advocacy doc explosion, you might have even thought to yourself that what the film needed most was a foundation in good journalism.

3. Newsmagazines Have Excellent Photographers on Staff

Photojournalism is as much a part of the DNA of the American magazine as is the writing. This begs the question, with the advanced decline of the influence of the printed newsweekly magazine: Is photography dead? Not, I would argue, if photographers attached themselves to documentaries, which are only growing in influence as the 21st century progresses. Documentaries, obviously, are visual mediums where the pictures -- almost as much as the narration -- drive the story. News magazines have iconic photographers on staff; they always have. Kira Pollack, Time's director of photography, also happens to be the executive producer of Red Border Films.

Newsmagazines are as much, if not more, about the storytelling as they are about the images. Reporters are hyper-articulate storytellers; editors are expert curators, pruning stories so that they hold maximum interest. A good reporter is passionate about their beat and scrupulous about their facts. These are also good qualities in the documentarian. It is no surprise that many former journalists – Sebastian Junger immediately comes to mind -- are getting into more visual mediums to tell their stories to the widest possible audience.

5. Newsmagazines Can Use Those International Bureaus

In the print business a foreign bureau can be a net negative. More and more foreign bureaus are being closed because people are more interested in celebrity gossip than, say, elections in Zimbabwe. But in the documentary business, having access to international stories with contacts as well as getting people willing to tell their interesting stories from the far flung reaches of the globe on camera, you have the possibilities of really compelling projects. And really compelling, intelligent reality-based projects are all about what documentary film units are all about.

Newsmagazines have essentially all the right tools to launch documentary units. They are established brands with excellent photographers, acclaimed storytellers (journalists), and, most importantly, international bureaus -- although less now than in the past -- that could stream an endless supply of interesting pitches through their pipelines. All they need is filmmakers.

Newsmagazines are the natural platform to spread the word to an interested audience, possibly garnering award consideration and -- ideally -- turn a profit (not a bad thing) while conveying information that leads to a better informed citizenship. There has never been a better time to be in the documentary business; there has never been a worse time to be in the print publishing business. But why stop at traditional news magazines? Journals of opinion -- traditional money losers that exist almost solely on a subsistence diet of principle and donations -- should also get into this game. The National Review and The Nation both have eager young readers that, in an age when the technological barrier to being a filmmaker has never been lower, could make interesting -- though highly partisan -- muckraking documentaries. The Reason Foundation has already gotten in on the game with their first feature documentary "America's Longest War." The game is afoot! Look backwards at the past to your own detriment, newsweeklies! Go forth and hire filmmakers!

Photo Credit: from Time Magazine's recent One Dream project, which includes a documentary of the same name.