The best ROCKY sequel yet is surprisingly and refreshingly progressive. But why can't gatekeeping entities like The Hollywood Reporter see that? 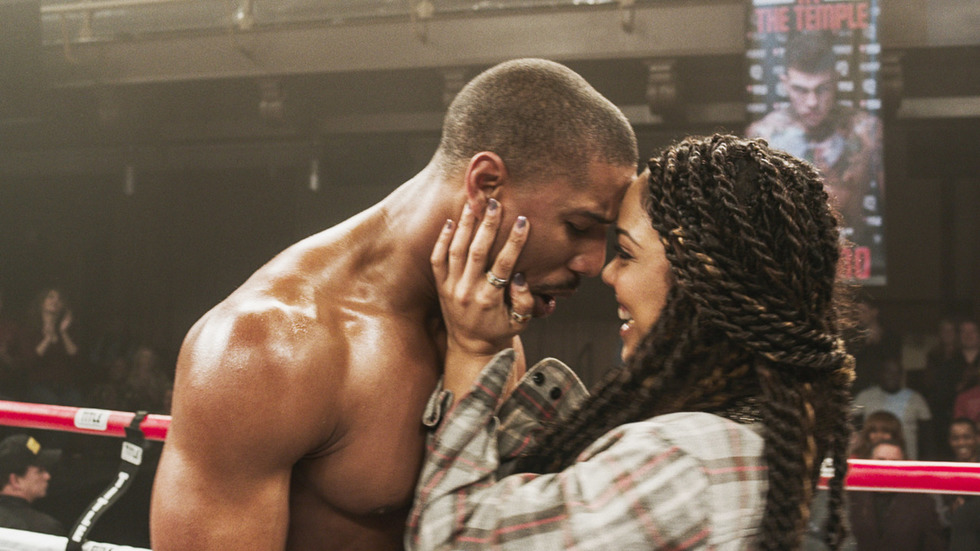 Michael B. Jordan and Tessa Thompson in CREED (2015). Photo by Warner Bros.

The AMPAS-caused déjà vu will soon be real for social-media-savvy cinephiles. It's about to be #OscarsSoWhite season all over again.

Last week's unveiling of The Hollywood Reporter's 2015 "Actresses" Oscar roundtable cover signified what's to come. The eight featured women are all Caucasian: Jennifer Lawrence, Carey Mulligan, Brie Larson, Jane Fonda, Cate Blanchett, Helen Mirren, Kate Winslet, and Charlotte Rampling. The cover's whiteness has rightfully been crucified on social media and speaks to the magazine's now-archaic adherence to old industry practices. Features editor Stephen Galloway published an explanation shortly after the cover surfaced online, writing, "The awful truth is that there are no minority actresses in genuine contention for an Oscar this year." Which means he and his team completely ignored the Oscar campaign surrounding Tangerine, led by two transgender women-of-color actresses.

And now, there's a second film with Oscar buzz that directly contradicts The Hollywood Reporter's stance. The early reviews for Creed, opening this Wednesday, November 25, have been sprinkled with mentions of its awards caliber. That isn't a shock; Sylvester Stallone's Rocky (1976), for which Creed functions as a kind of sequel/spinoff hybrid, snagged 10 Oscar nominations and won three statues in 1977 for Best Picture, Best Director (John G. Avildsen), and Best Film Editing (Richard Halsey, Scott Conrad). And that quality is back in effect: Creed is the real deal Holyfield. It's the Rocky franchise's strongest entry since Stallone's '76 original, landing all of the anticipated right and left emotional hooks with enormous skill.

More importantly, in the wake of The Hollywood Reporter's vanilla explosion of a cover, Creed features a refreshingly dynamic black female character, and she's played by one of Hollywood's most exciting on-the-rise actresses: Tessa Thompson.

As with every Rocky installment, not to mention most other boxing movies that don't star Sylvester Stallone, Creed is, first and foremost, primarily fueled by testosterone. Directed and co-written by Fruitvale Station filmmaker Ryan Coogler, the seventh Rocky film follows Adonis Johnson (played terrifically by Michael B. Jordan), the son of Rocky Balboa's old BFF Apollo Creed, as he defiantly slugs his way through shots against his character, questions about his in-ring abilities, and nepotism charges. Creed's nucleus is the odd-couple bond between Adonis, or "Donnie," who's begrudgingly grown up privileged and wealthy in the late Apollo's Los Angeles mansion, and Balboa, the seasoned picture of blue-collar grit. Their trainer/student dynamic yields the film's heaviest blows to the heartstrings, especially in the third act, where Creed powerfully tackles mortality alongside Donnie's underdog ascension.

There's one particular scene where Stallone, who—Expendables, be damned—is finally "acting" again, may leave you crying more than an uppercut to the chin. He's just received some heartbreaking personal news, and when Donnie tries to help him, Rocky lashes out with a crushing monologue laced with self-loathing and defeat. It's the moment that has no doubt inspired critics to write about Stallone's initially unexpected yet now very possible chances to secure a place in the Academy's Best Supporting Actor category. It's the clip they'll play during the event’s telecast as last year's Best Supporting Actress winner, Boyhood's Patricia Arquette, announces Stallone's name as one of the five possible winners. It's a big reason why Creed is currently shaking up Oscar bloggers' rankings and predictions. Stallone's suddenly a contender in the Best Supporting Actor category, and if Coogler's movie delivers a box office TKO this weekend, the film itself could even emerge as a Best Picture sleeper.

In the weeks ahead, though, Creed's secret weapon will most likely get buried underneath all of the ensuing awards season conversation. It's not Michael B. Jordan, the film's front-and-center star who's marvelous in the role; he forcefully pulverizes the viewer's emotions during Creed's climactic boxing match, where he finally confesses his need to not be seen as a "mistake" to an equally teary-eyed Rocky. But, no, Jordan isn't the film's secret weapon: it's co-star Tessa Thompson, the Talia Shire/Adrian to Jordan's new-age Stallone/Rocky.

Adonis starts out as, true to boxing movie form, a rough-and-tumble drama setter. Having spent his early teen years in juvie, he's inherently a back-against-the-wall fighter, carrying a boulder-sized chip on his shoulders over the fact that his biological father, Apollo, impregnated his now-deceased mother out of wedlock). He gives up a plush financial job in LA and the comforts of the Creed mansion, where he lives with Apollo's widow (Phylicia Rashad), to move to Philly and track down Balboa, in hopes of honoring Apollo's legacy by becoming his own man/champion. Hotheaded and surly, Donnie closes himself off to everyone in Philadelphia until, by chance, he meets his alluring neighbor Bianca (Thompson). She's a budding singer/songwriter whose self-made music sounds like Jill Scott crossed with FKA Twigs, and, aside from Rocky, she's the only person able to break down Donnie's guard. Bianca's importance to Donnie's growth is only rivaled by Rocky, though not by much.

Creed's fight scenes are, naturally, its driving force, and Coogler proves himself wonderfully adept at staging bone-crunching pugilism; one of Donnie's earlier matches is shot in one take, with the camera spinning around the ring, tightening in facial close-ups, and conveying the immediacy an athlete must feel in the heat of battle better than most other adrenalized sports films ever have. Creed is such a triumph, however, because of its quieter moments, the ones that don't involve gloves, bells, or blood-soaked towels. Like in Fruitvale Station, Coogler's abilities shine brightest in Creed’s myriad character-building, dialogue-heavy sequences.

Two of Creed's best action-free scenes have nothing to do with Stallone—they're beautifully played exchanges between Jordan and Thompson. For their inadvertent first date, Bianca brings Donnie to get his first-ever authentic Philly cheese steak; over a couple of messy sandwiches, she opens up about her musical dreams and her slightly disabling bout with progressive hearing loss, and puts Donnie on to Philly slang like "jawn"—it's one of the first times Donnie smiles in Creed. In the other, they share their first kiss while Donnie listens to Bianca’s music in her apartment. It's sexy, romantic, and believably two-sided. She's just as in control of the moment as Donnie is—their sexual chemistry is Carol-level excellent.

Both of those scenes greatly display Thompson's subtle gifts as an actress. She gives Bianca a measured confidence that separates Bianca from other romantic leads. Donnie has the capacity to dominate a room with his coldly thunderous presence, yet Bianca is equally commanding; she keeps him on his toes, so to speak, in conversation and in his obvious courtship, at first deflecting Donnie's flirtations and gradually falling for him on her own terms. In sports movies of Creed's kind, the love interests can be described as "female saviors," variations on the ever-dreaded Hollywood cliché known as the "white savior." The hardened male brawler is figuratively, and sometimes literally, rescued by the woman he randomly meets, more often than not while she's bartending, and it's through her love that he's ultimately able to win. Thanks to Coogler and co-writer Aaron Covington's script, though, Thompson has much more to do in Creed than merely be the supportive cipher. They've written a recognizable woman with her own life and her own aspirations who is Donnie's equal, not his emotional subordinate.

In a just world where the Oscars aren't bought by the big-wigs willing to "play the game," Thompson would've been in 2014's nominations race. But, alas, that’s not reality. Hell, Thompson didn't even receive an Independent Spirit Award nod, which is ridiculous until you remember that the Indie Spirit Awards have abandoned their original essence and are now essentially the Oscars 2.0. Put Thompson's performance alongside, say, Felicity Jones' Oscar-nominated turn in The Theory of Everything and it's tough to vote against Dear White People's central one as the more memorable option.

So, in that sense, Thompson being neglected by The Hollywood Reporter’s editors for this year's Actress Roundtable isn't anything new for the 32-year-old actress. It's just worse this time. Consider this: One of The Hollywood Reporter’s cover subjects is Jane Fonda, who's in the Oscar convo with Youth, a film in which Fonda on-screen for less than 10 minutes; not to mention, Fonda is Hollywood royalty and, thus, doesn’t need a THR cover's exposure. Thompson, on the other hand, would've greatly benefitted from the THR look and deftly handles her film's third most prominent character.

The good news is that Thompson is only getting started, so there's every reason to believe she'll be invited to pose for a future THR cover. Or is there? Thompson's talents would lead you to believe so, but keep in mind that Creed is an anomaly. It's rare to see a mainstream, Oscar-recognized, 3,000-screens-guaranteed franchise like Rocky be reinvigorated by a young black filmmaker who's able to populate it with a predominantly black cast. Most producers with Sylvester Stallone's cache aren't that progressive—respect due to Sly for recognizing Coogler's game.

It's similarly atypical for black actresses to get the opportunity to portray strong, modern women without any racially tinged underlines. As Viola Davis explained during her brilliant Emmys acceptance speech in September, the only thing that separates Hollywood's actresses of color, whether exceptionally gifted or not, white actresses is "opportunity." As it stands, the only way Thompson can score a future Hollywood Reporter cover is if she co-stars in a prestige film about slaves (see: Lupita Nyong'o on the 2013 edition's cover for 12 Years a Slave) or one that's squarely concerned with racial tensions (see: Oprah Winfrey and Octavia Spencer that same year for The Butler and Fruitvale Station, respectively). Playing normal, current women like Creed's Bianca doesn't appeal to The Hollywood Reporter or the AMPAS. Apparently it doesn't matter that Thompson's Creed character isn't unlike Amy Adams' tough-willed, not-a-pushover Charlene in David O. Russell's The Fighter, except that Amy Adams is, of course, white. (Indeed, Adams was a part of THR's 2010 roundtable for The Fighter.)

Until that changes, women like Tessa Thompson don’t stand a chance against the industry's Amys, Kates, Cates, Careys, and J-Laws.

In other words, #OscarsSoPredictable and/or #OscarsSoCloseMinded. Pick your poison, Film Twitter.