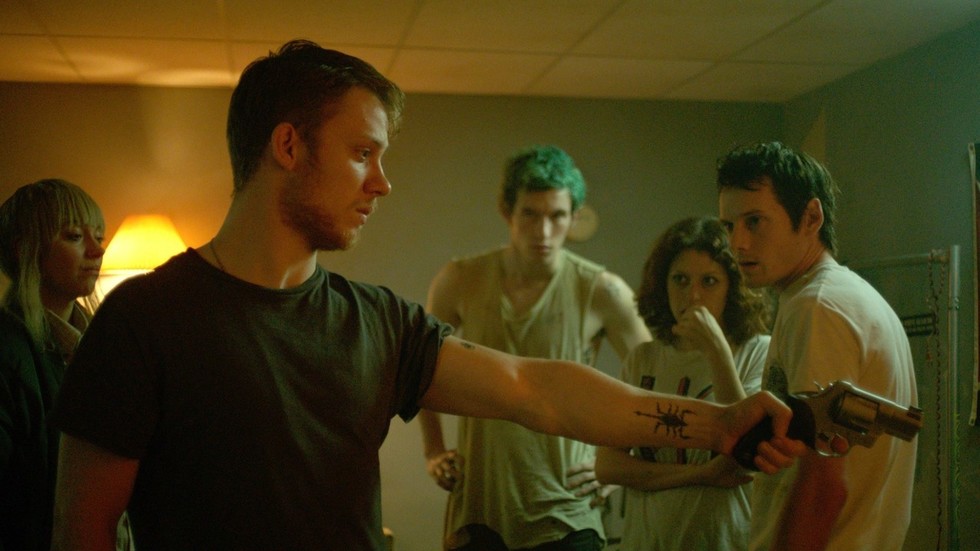 Ask any serious genre movie fan to name the 2016 movie they’re most excited about, chances are you’ll hear about The Witch, the Sundance 2015 sensation that’s opening nationwide on February 19 and, trust, is legitimately amazing. But there’s also the possibility that, depending on who you ask, the answer to that question might be Green Room, which similarly made the festival rounds last year and received positive reviews on par with The Witch. Another common thread between the two films: They’re both being distributed by A24, the on-fire indie film brand that’s currently riding high with Oscar nominations for Ex Machina and Room.

Green Room most certainly won’t appeal to the Academy, and that’s a great a thing. As the first official trailer demonstrates, it’ll way too brutal for those folks. It’s the third effort from writer-director Jeremy Saulnier, the brains behind 2014’s exceptional thriller Blue Ruin, which flipped the revenge sub-genre on its head by adhering as closely to realism as possible. Green Room feels just as authentically intense. Anton Yelchin, Imogen Poots, and Alia Shawkat play members of a punk band that play a gig at a grungy nightclub run by neo-Nazis; when Yelchin accidentally stumbles onto a murder scene in one of the backstage green rooms, he and his friends find themselves trapped inside and fighting for their lives against the skinheads and their icy, elder leader, played by a menacing Patrick Stewart.

You know all of that social media chatter that’s been happening about The Witch for the past few months? Yeah, it’ll soon switch over to Green Room, leading up to Saulnier’s film’s April 15 release in New York and Los Angeles, followed by a nationwide rollout on April 29. And here’s why—check out the trailer below.

The next best way to prep for Green Room: Make it a priority to, if you haven’t yet, watch Jeremy Saulnier’s Blue Ruin on Netflix streaming. And, if you’re feeling extra ambitious, take a look at his 2007 debut, the raucous and gory horror-comedy Murder Party, on the all-horror streaming service Shudder.