As Helen Mirren pointed out recently: our TV screens are full of the bodies of dead young women. Is it exploitation, or does it just reflect reality? And what's the alternative? 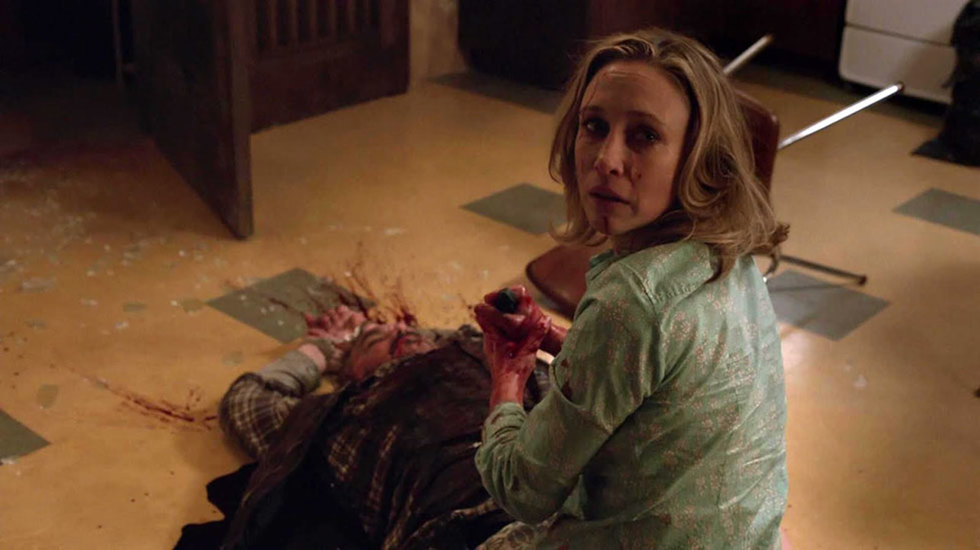 I was raving to friends recently about how obsessed I am with murder mysteries these days, a seasonal pastime that revved into a runaway one Christmas vacation in my parents’ living room in Australia. I was going on and on about how delicious these shows are and how, upon returning back to the tundra of NYC I launched into The Fall with Gillian Anderson. I spent a good two nights sucked right into Anderson’s flawless strawberry cheeks as she investigated a live serial murder case pitting an upstanding family man against young professional women in their beds: murders laced with sexual deviance, domestic compulsion and erotic obsession.

So many of these shows hinge on the imagery and details of little girls who die gruesomely.

Young women. Sexual deviance. Bleak bleak bleak and yet give me more. But this time, episode after episode, series after series, an overwhelmingly popular plot formula was making me squirm more than usual: so many of these shows hinge on the imagery and details of little girls who die gruesomely. Little girls and young women who die in ways that we should not be entertained by; in brutal, often sadistic ways that make life for the family and survivors virtually impossible.

Seems I wasn’t alone in my torment. Helen Mirren-Helen Mirren!-was thinking similarly. “I do get terribly upset,” Mirren said at the BAFTA awards last week when asked about a recent rant by David Hare about the “ridiculous” body count in movies and on television these days. She went on to skewer: “Most of those bodies are young women.”

Mirren and Hare were objecting to, it seems, not so much the plotlines but the visual imagery of all these bodies. The Fall opens with juxtaposed scenes of Anderson getting domestic and scenes of a gorgeous brunette lawyer gulping wine in a bustling bar and gabbing with her flirty coworker about love and sex. All the while, the murderer choreographs his stage in someone—the brunette’s?—lovely home. Anderson’s warmth-free, unflinching detective bullies her way on to the taskforce, insisting that another woman is about to get it and we watch, bonding with that next target who is eventually suffocated (at best) in front of us, writhing and gasping in her own clean sheets.

What’s so jarring and haunting about many of these sophisticated TV series is that we’re not expecting it most of the time.

The imagery is a touch cleaner (indeed, the killer is pathologically meticulous) than that of Rosie Larsen, found dead in a political campaign vehicle in a bleak Seattle forest, throughout the first season of The Killing, which I went on to next, catching up on the murdered-women fest on Netflix, Amazon Prime and all through the cablesphere these days. Over episodes, photographs of the teenage Rosies’s mutilated fingernails and drained body flash between scenes and then lay before us on the coroner’s table.

It’s not anything we haven’t seen on CSI, in which sadistic imagery is dished up on sterile metal gurneys and on petrie dishes. Dead bodies have been essential symbolism and dramatic fodder for decades of film and television. Mirren herself was the dogged detective pragmatically facing horrific crime scenes in the brilliant nineties British TV police thriller, Prime Suspect in which psychotic, grisly murder is what the wedding scene is to romcom. (She was also in the scandalously graphic and banned movie, Caligula).

But if you put all these together into one long season, or long season after long season of deeply mesmerizing viewing….oooof. And David Hare and Mirren suggest the body count has gotten higher. Hare made an example of The Bridge, in which bodies of men and women show up on desert roadsides and cold urban settings sometimes more than one to an episode. And now with True Detective, an untouchable, poignant, quotable, meditative, genuine psycho drama, we’ve got another naked, rotting female, circled by the camera, her shapely buttocks sketched in close up by Matthew McConaughey’s weirdo genius murder cop, her blonde hair singed in the Louisiana sun to orange as it splays across her arms tied to a dry tree.

It seems that images of good looking women, of flushed cheeks at the height of health (or burdened cheeks in the throes of the hooker life), are becoming synonymous with the images of those same cheeks and bone structure shredded, scarred, crawling with a lone sinister cockroach or being swarmed by quietly buzzing flies. Little girls in cotton dresses running into the sunlight and the virtuous sounds of giggles and singing in playgrounds are synonymous with the image of a shovel unpacking the shallow grave from which a little girl’s dead hand juts out.

Yet it’s not only the images. I was pushed to the edge when Downton Abbey introduced the (spoiler alert) rape plot this season. There was Matthew’s death previously, which was gratuitously heartbreaking as well as picturesque—his wide, lifeless eyes divided by the blood trickle from his brain ripping us from voyeuristic bliss. Then this season, Anna is dragged by the hair into a servant’s room and the curdling sound of her shrieks are drowned by the live opera performance that the rest of the house is blissing out to upstairs. I’m done, I thought. I’m done. It was late; I’d allowed myself one more episode. Sleepless and traumatized, I couldn’t take it. Dead bodies are one thing. Rape—the sound, the threat, the blatant dramatization is just as bad. (Worse?)

It happens in Bates Motel as well—a rough, raw scene in the kitchen with Vera Farmiga attacked from behind, the camera on her face as the boorish assailant’s belt clangs and beats against her. Later, she says to her son, “I’m sorry that dirtbag raped me,” or something like that…and then we move on.

Jane Campion did it to us also with a doomful nighttime scene in Top of the Lake, in which the lead detective, played by Mad Men’s Elisabeth Moss is savagely gang raped as we watch throughout the mist, punctured by the most familiar and human of screams. Meanwhile, Moss’s character searches for a missing girl and there’s no telling how grim her fate is going to be.

Mirren is touching on an age-old, Socratic debate: Does this ubiquitous imagery encourage sociopaths?

What’s so jarring and haunting about many of these sophisticated high-rated TV series is that we’re not expecting it most of the time. I avoided movies like Wolf Creek and The Piano Teacher and even the cinema versions of the Girl With the Dragon Tattoo series for a reason: I knew rape was a pivotal feature and my imagination is realistic enough and the world can already feel quite bleak.

To purge, to educate, to avoid? Mirren is touching on an age-old, Socratic debate: Does this ubiquitous imagery encourage sociopaths? Does it inure us to the impact? Are we glamorizing the death and brutality of little girls? Or is it purging us, somehow?

These aren’t unlike the questions around the media coverage of the war-happy past decade and of the prolific uploading of killing videos on the internet: “Photographs can convey an emotional truth about suffering,” said the critic Susie Linfield recently. Linfield’s book, Cruel Radiance explores the history of photography and violence and our relationship with images of suffering and brutality. “Rather than censor ourselves, we should allow ourselves to experience the photographs, and then analyze what those reactions mean,” Linfield told The New Yorker.

Linfield encourages us to fully engage with the images that can, arguably portray more of the world in an instant than an epic narrative. I’ll apply that challenge to my viewing habits, especially if it means more exceptional sessions with Idris Elba in Luther. And anyways, would we be so captivated any other way? Isn’t it more clinical, somehow more sadistic to not show the bodies, just to be seduced into the drama without the graphic details to mess with our day’s outlook? These shows reflect the reality, a few murder-mystery loving friends of mine suggested: women and children are overwhelmingly the victims of violent crime and the innocence and injustice is more compelling and confounding than sitting through episode after episode of wealthy middle-aged men in pressed shirts being snatched from the sidewalk by…other men in their prime. (Though there are plenty of male-victim narratives out there and they make for okay drama also.)

In Case Studies, the BBC TV adaptation of Kate Atkinson’s addictive fiction series, the strapping Jackson Brody attempts a side job of solving the mystery of his murdered sister as a child, while investigating and intuiting murders more-than-often involving the stabbing death of a post-teen woman or the long ago disappearance of a perfect little girl, a girl “spun from light,” from her bedroom plastered with nursery rhyme wallpaper.

“Ye shall know the truth, and the truth shall make you free,” is the Biblical quote Atkinson stamps the first book in the series with. I’d rather live in a world where little girls are safe to run in the sun in flimsy little girl dresses and in which young women can drink buckets of wine and wear short skirts without the threat of rape and murder on her way home. None of us live in that world, though. And so long as I’m submitting myself to the thrill of the drama, I’ll take on board the reality behind it.