Kicks continues the steadily growing revival of West Coast counter-culture filmmaking. It will have its world premiere at the Tribeca Film Festival on Thursday, April 14. 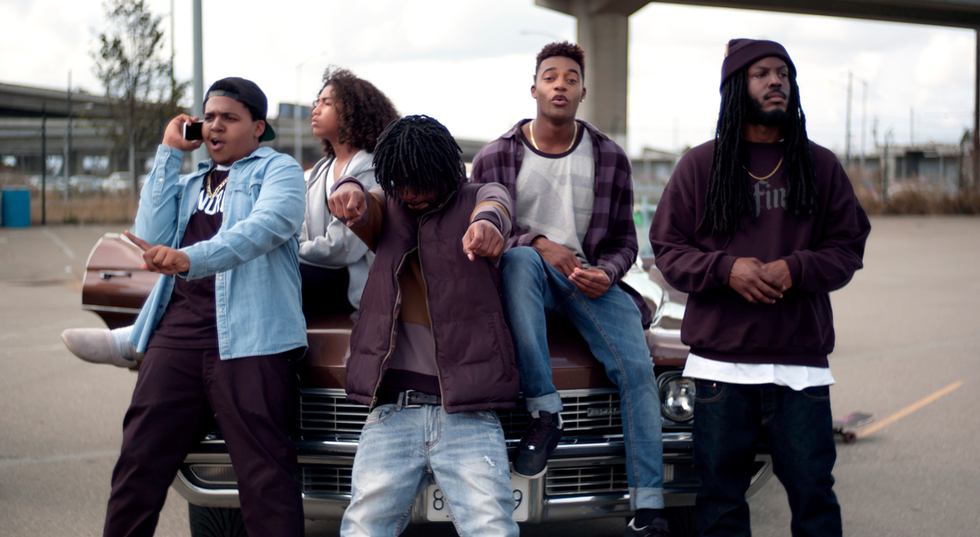 There's a new hot spot for producers hoping to find exciting new talent: California's Bay Area. The region's filmmaking renaissance kicked off in 2013 with Ryan Coogler’s Fruitvale Station, which led to the now-29-year-old Oakland native getting to direct and co-write last year's big-studio hit Creed, and, in turn, signing on to direct Marvel's sure-to-be-enormous Black Panther. And now one of Coogler's childhood friends has a chance to make similar waves.

A longtime buddy of Coogler's through a mutual friend, first-time director Justin Tipping is about to turn heads with Kicks, Tribeca 2016's US Narrative Competition section’s opening night premiere. Set in and around Tipping's homeland of Oakland, it’s a vibrant and gritty look at the teenaged Brandon (played by newcomer Jahking Guillory, a former running back on a youth football squad coached by Snoop Dogg), a pint-sized kid who's struggling to find his place in life alongside his two best friends: Rico (Christopher Meyer), a smooth ladies man, and Albert (Christopher Jordan Wallace), a confident jokester. When Brandon scores a fresh pair of black-and-red Air Jordans, he finally gains self-assurance, but it doesn't take long for a group of bigger guys to beat him up and swipe his kicks. Rather than cry about it, Brandon decides to "man up" and hunt down the gangbangers who stole his prized sneakers—but at what cost?

With an impressive visual style and a vintage hip-hop soundtrack, Tipping has created an urbanized Odyssey that's as indebted to classic '90s rap music as it is to Italian neorealism, the latter influence coming from his time spent studying abroad in Italy while attending UC Santa Barbara as an undergrad. "I have a huge appreciation for how much I can still connect to the stories in those films, even though I'm not from that world at all," says Tipping, 30, who loosely modeled Kicks after Vittorio De Sica's 1948 seminal film The Bicycle Thief. "Those older Italian films put you into this very specific time and place in society and show you how that society affects all of the characters. That's exactly what I want Kicks to do."

Despite its teenage characters, Kicks should speak to audiences well beyond the West Coast youth culture it depicts. "The idea of using an expensive possession to feel some kind of confidence or purpose is relatable for anybody," says Tipping. "On Wall Street, for example, it might be about what kind of watch you have. You think these objects are gonna define you and make people respect you, and that’s a universal feeling. There are girls who want the most expensive Gucci bag, but why? What are you trying to tell the world?"

Ahead of the film's April 14th world premiere, Tipping spoke with TribecaFilm.com about its real-life inspiration and how he's continuing what filmmakers like Ryan Coogler have started.

Both the beatdown given to the film's main character and the lesson learned from it come from a very real, and painful, place.
"It's the kind of thing that happened all the time where I'm from—you'd get jumped for your shoes or your necklace. It happened in a parking lot in the West Oakland area, before I was about to catch Not Another Teen Movie with some friends. I'd just turned 16 and ordered a new pair of all white-on-white Nike Air Prestos, with my nickname, 'J-Tip,' engraved in them. [Laughs.] I thought I was on top of the world, and my dad had let me borrow his car, so that made me think I was even cooler. There were these two cars parked ahead of me, and this kid jumped out of one right when I walked by, and yelled, 'He's got the Prestos!' I was like, 'Oh, shit—I'm definitely fucked right now.' They surrounded me and gave me a classic beatdown. They stomped me out, but, thankfully, some lady happened to be walking by, so they peaced out pretty quickly."

"The most humiliating thing was that I still tried to see the movie. I tried to be a man about it, even though my face was bleeding. The lights came up after the movie and my face was swollen, and I had two black eyes. I was a wreck. This theater was full of other teenagers, and once they saw me, they were like, 'Dude, you got fucked up!' It became a walk of straight-up humiliation. But when I got home, my older brother told me, 'It's okay, you're a man now.' That was the emotional impetus for Kicks. I was proud that I went through that rite of passage, because it made me a man, or so I thought at the time, but when I look back on it, I don’t feel that way anymore. There's no reason why violence should be synonymous with masculinity and becoming a man as a teenager. As I've gotten older, that became one of the big themes behind Kicks."

Coming on the heels of last summer's indie breakthrough Dope, Kicks continues the steadily growing revival of West Coast counter-culture filmmaking. Consider them today's Boyz N the Hood and Menace II Society.
"I had older brothers who are 35 and 37 now, so I grew up as a big hip-hop head while my older brother was a DJ who'd make mixtapes. So that era of hip-hop is what I know. The first album I ever bought was Gang Starr's Moment of Truth. I definitely wanted a mixture of hip-hop in the film, from Wu-Tang's 'C.R.E.A.M.' to modern-day Bay Area stuff. The main character recites the first verse of Biggie's 'Party and Bullshit' to himself, and that's because I've never been able to forget that verse, especially the part where Biggie says, 'With my sidekicks, rocking fly kicks.' When I was a teenager, I'd constantly recite lines or slang I'd hear in these hardcore rap songs, and I'd use those lyrics to cope with certain situations or to distract myself from things. I think that's true for most people. Music has such a big effect in people's lives; we often go back to certain songs."

"For Kicks, I thought it'd be interesting to have this character rapping in his head internally, as a kind of security blanket. I've never seen anyone use that device before in a movie. The big idea all along was, can I make a coming-of-age Goonies but set it in a world that I know? It just naturally happened that I said to myself, 'Of course he should rap in his head—I do that all the time.' So I went with it."

"It seem likes there's a resurgence of these kinds of stories, especially with the success of Straight Outta Compton. People realize, 'Oh, people do love to see movies in these worlds.' And Dope also helped to pave the way, for sure. But, man, it was still incredibly difficult to get Kicks made. I had this idea in 2009, I finished the script in 2011 after I finished the short that I made, and then it was impossible to get it made. People would say, 'We love the script, but there's no celebrity in it,' so it was infinitely more difficult to get made because of that. Hopefully now, because of movies like Fruitvale Station, Dope, and Straight Outta Compton, a film like Kicks will appeal to and resonate with a lot of people."

Kicks will have its world premiere on Thursday, April 14. To buy tickets for any of its four screenings, click here.