Making the festival rounds, AS I OPEN MY EYES has already received wide global acclaim, winning two awards at the 2015 Venice Film Festival. Its director and co-writer, Leyla Bouzid, spoke to us about the film in anticipation of its Tribeca 2016 screenings. 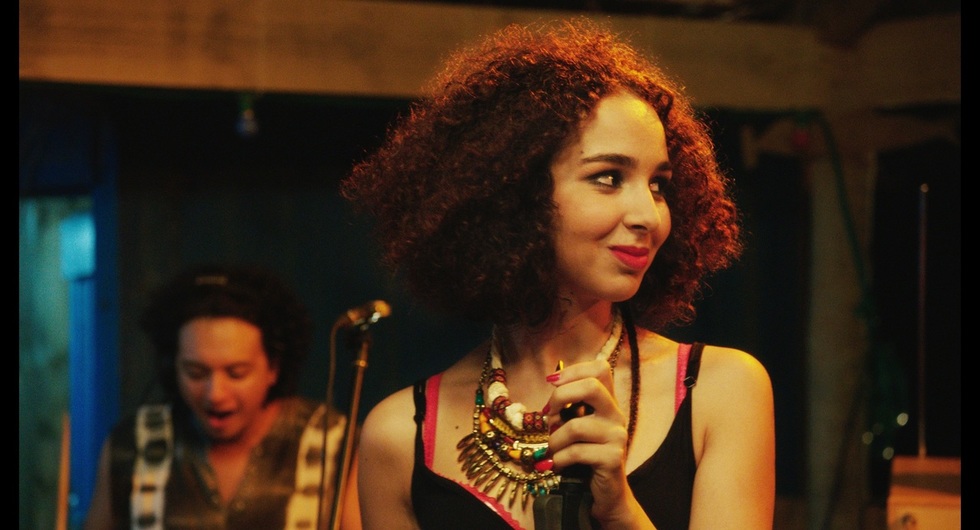 Baya Medhaffer in Leyla Bouzid's AS I OPEN MY EYES, screening as part of Tribeca 2016's Viewpoints program.

As I Open My Eyes, the feature directorial debut of Tunisian filmmaker Leyla Bouzid, centers on a young woman, Farah (played by Baya Medhaffer), at a critical moment in her life. While urged by her mother to attend medical school, she dreams of pursuing the freer existence of a musician. Farah and her band mix classical Tunisian sounds with modern rock beats, and their lyrics address the country's political and social realities and contradictions. But as the pressure mounts to abandon her music, and police violence and aggression threaten to silence her, Farah's bond with her mother is tested.

The film stems from Bouzid's 2012 short Mkhobbi fi Kobba (Soubresauts), about a mother and daughter. "We knew the girl was very free," says Bouzid of the short's main character, "but we couldn't see her freedom or her path." As I Open My Eyes presented an opportunity to delve deeper into that young woman's life. To further enhance the plot, Bouzid chose the Tunisian revolution, which lasted from December 18, 2010, through January 14, 2011, as a narrative backdrop. Through Farah, the writer-director could show what gave rise to the collective drive to overthrow former Tunisian president Zine El Abidine Ben Ali. "Everyone was filming what was going on in the street," says Bouzid. "I wanted to make a film about the months prior to the revolution and the feeling of struggle. I want people to understand that these characters would go out into the street and participate in the revolution."

To effectively convey that message, Bouzid structured As I Open My Eyes in three thematically different acts. "The first is about family; the second, society; and the third, the system of the country," she explains. "But in the end, we go back to the first: the family. For me, to solve the problems of society, you have to start with the family."

For the family's key members, Bouzid found a pair of gifted women. Medhaffer, a singer and first-time actress, was discovered within a pool of 500 girls between the ages of 16 and 25. "[Baya] told me she was singing in a choir, which turned out not to be true," says Bouzid. "In her first audition, she sang Amy Winehouse and was really fun." In the role of the mother, Bouzid cast Ghalia Benali, who gives a stirring performance. "Ghalia had the same hair as Baya. I wanted an older woman who was very beautiful. She's also a singer in real life, adding another connection between mother and daughter."

Bouzid believes that Farah's fate would look much the same today, five years after the Tunisian revolution, as it does in As I Open My Eyes, with the exception that there's now more open solidarity in her homeland. "The mother would still not let her daughter sing at a bar," she reasons. "There are still singers who are in prison for smoking a joint. There would still be attempts to stop her from singing. But the civil society today would move for her; now there are more organizations and social media that are looking out for people and standing together. There would be protests, which were not possible in the Ben Ali times. The women in Tunis [Tunisia's capital] are really strong. There are a few more veiled women in the streets, but it's not that conservative. There are lots of girls like Farah in Tunisia today."

And now, thanks to the film's four Tribeca screenings, New Yorkers will have the chance to meet one of those girls. "I'm proud to be presenting a picture of Tunisia that people do not know. I want it to be really sincere and honest about the Tunisia I know and not reproduce the traditional image we always see. The film was released in Tunisia in January and had 50,000 spectators, which is huge for such a little country with such few venues. Lots of young people went to the cinema; for many of them, it was their first time [at a cinema]. They were even seeing it several times. I'm happy that the younger generations are going and claiming it as theirs."

"At the moment, there are lots of first films from the Arab world and many young talented directors," adds Bouzid. "I hope there will be an Arab wave of cinema. There's a lot happening in our countries, and it's important to show a different image than what you see on the television or in the news. It's important to hear the voices of several countries, because each one is very different. There is no industry, so it's very hard to finance films. I'm happy that there's an Arab film in a big festival like Tribeca, and that people will become accustomed to seeing something from North Africa."

SEE: A GUIDE TO ALL ARAB WORLD FILMS AT TRIBECA 2016

Such an inclusive and realistic view of countries like Tunisia has been long overdue. "Until three years ago, festivals had no Arab films at all," says Bouzid. "In Europe and America, it’s important to have our voices be heard."