Home » Tribeca News » Don’t Bother Voting on the Oscars If You Haven’t Heard... Disasterpeace's IT FOLLOWS Score
View All News

Don’t Bother Voting on the Oscars If You Haven’t Heard... Disasterpeace's IT FOLLOWS Score

For the remainder of 2015, we’ll be nudging Academy voters toward deserving films, performers, and craftsmen who risk getting lost in the Oscar shuffle. This week: an already iconic new horror movie score. 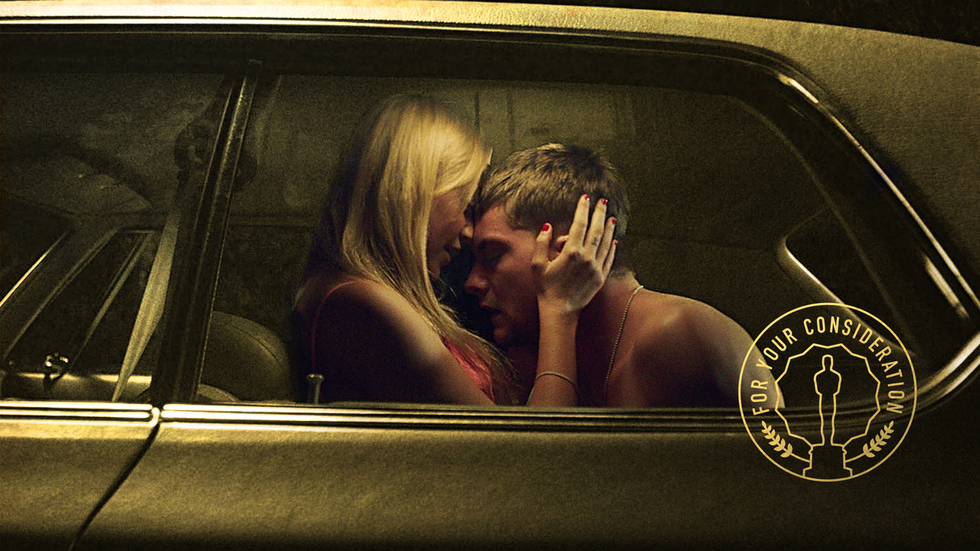 For fans of prestige dramas, the months in which movies' Academy Awards prospects are discussed pass on by with tons of excitement. But for horror movie lovers? It's officially Get Angry Season.

The genre is given the shaft on an annual basis, no matter the circumstances. A movie like James Wan's The Conjuring receives rave reviews, earns $137 million at the domestic box office, and is universally praised for having an immaculate period-specific set design? It wasn't even in the running in 2013. The Babadook star Essie Davis gives one of 2014's undeniably best performances? Not a chance of even being mentioned within Oscar chatter. And when an obviously-psychological-horror movie like Black Swan earns multiple Oscar nominations? Outlets like Vanity Fair publish pieces with headlines like "Is Black Swan a Horror Movie?" and with an answering rationale as backhandedly insulting as, "Not in the traditional sense—I mean, it's not a gory Saw-type movie," as if horror movies are only defined by their bloodshed.

The sad truth is, the only horror movies that ever stand a chance are the ones that mask their genre cred beneath starry packages, like the aforementioned Black Swan, directed by the acclaimed Darren Aronofsky and starring A-lister Natalie Portman. Or the 1991 classic The Silence of the Lambs, which won five Oscars, including Best Picture, Best Actor (Anthony Hopkins), Best Actress (Jodie Foster), and Best Director (Jonathan Demme). The reasons for the genre's decades-long neglect among awards groups aren't enigmatic: the older, risk-averse folks who vote on these prizes prefer the feel-good safety of stodgy biopics, movies about the film industry, and whatever Harvey Weinstein pushes down their throats. It's to the point where the only way another horror movie will ever have a shot at winning Best Picture is if Mr. Weinstein backs one made by Quentin Tarantino.(Which, to be clear, I'd absolutely love to see happen.)

That's why I haven’t been fooling myself by thinking that indie writer-director David Robert Mitchell's It Follows was ever in the running for Best Picture, even though it's one of 2015's best-reviewed movies and somehow premiered at the Oscar-friendly Cannes Film Festival, a rarity for horror. Perhaps that's because It Follows is part of the current wave of "art-house horror," the string of critically beloved scary movies that favor subtlety and existential dread over, cringe, “gory Saw-type” thrills.

With its brilliantly simple concept, that of a supernatural entity that's passed via sexual intercourse, It Follows operates on the most original and strongest genre premise since Wes Craven’s O.G. A Nightmare on Elm Street. And I'm happy knowing that critics of all kinds, whether genre-focused or populist-pleasing, have recognized Mitchell's movie's superior merits, and that its limited theatrical release back in March and April was an eye-opening success, grossing over $14 million on a reported $2 million budget. There's also the comforting fact that It Follows snagged three Independent Spirit Awards (for Best Director, Best Cinematography, and Best Editing) last month is definitely satisfying.

But there's one component of It Follows that's so vastly better than damn near everything else of its type released in 2015 that I couldn't help but think that maybe, just maybe, it'd sneak into the awards season races. Hell, all of the movie’s glowingly positive Cannes 2014 reviews singled this particular element out as something truly remarkable. I’m talking about Rich "Disasterpeace" Vreeland's incredible and instantly iconic original score, the wildly unnerving, hypnotic, and masterfully orchestrated soundtrack that’s been on repeat in my Spotify for the last eight months. One of its few 2015 rivals is Jóhann Jóhannsson's "subtle war music" in Denis Villeneuve’s phenomenal drug war dynamo Sicario, which also is, in its own formidable and singular ways, a horror flick. The difference, though, is that Sicario's horror is Oscar-approved, since you can describe Villeneuve's movie as numerous other things, but It Follows is solely horror, and therefore sadly Oscar-repelling.

It isn't inconceivable to imagine a horror movie's music winning the Academy Award for Best Original Score. In 1976, Jerry Goldsmith's score for Richard Donner's demonism knockout The Omen accomplished that feat on the strength of the still-chilling "Ave Satani," one year after John Williams defied the odds and took home the gold for the steadily building violins in Steven Spielberg's killer shark blockbuster Jaws. But those are anomalies. It's infuriating as a horror die-hard, though, to realize that the majority of cinema’s most timeless and ubiquitous movie scores come from the fright genre. Ask random people on the street to hum whichever movie theme song springs to mind and, chances are, if it’s not John Williams' Star Wars arrangement, it’ll be Bernard Herrmann's shrieking shower kill sounds from Alfred Hitchcock's Psycho (1960), or John Carpenter's haunting Halloween (1978) organ melody. None of which, maddeningly, were even nominated for an Oscar.

The It Follows score is on par with all of those. One of Disasterpeace's soundtrack's biggest strengths is its creator’s lack of cinematic experience. While working on the movie's script, Mitchell reached out to Vreeland as a fan of the video game composer’s work in the puzzle game Fez. Vreeland had never dabbled in movie tunes, and his freshness permeates every track heard in It Follows, striking a unique middle-ground between what sounds like traditional gamer music and what’s clearly a subversive ode to John Carpenter's greatest ’80s scores and the mesmerizingly assaultive tracks recorded by Italian prog-rock group Goblin and sprinkled throughout Italy's grandmaster of horror Dario Argento's best movies, like Suspiria (1977) and Deep Red (1975). It Follows' main theme, simply called "Title," burrows into your head like some unholy cross between The Legend of Zelda and Carpenter’s Halloween.

Elsewhere, Disasterpeace's score unleashes a terrifying barrage of sonic dissonance and alarmingly shrill computerized instrumentation. One of the movie's biggest shock moments comes when its protagonist, the teenager Jay (Maika Monroe), investigates sounds coming from her home’s kitchen; Mitchell switches to slow-motion as Jay inches closer to the room, turns towards the camera, and repels back in horror, and when we see what she does, it's breathtakingly startling: there’s an unknown girl, around Jay's age, covered in smeared lipstick, blood, and her own urine, approaching Jay. Disasterpeace's music cue, labeled as "Company" on the It Follows soundtrack album, pierces ears with its disorienting cascade of piano keys, static buzz, and other unidentifiable sounds. It's as if pieces of every horror movie score ever made have invaded the speakers as one massive audio tornado:

My personal favorite bit of music in It Follows leaves it mark before Mitchell’s movie reaches the five-minute mark. Like so many of the greatest horror movies do, It Follows opens with an immediately to-the-gut jolt; the score, for its part, begins rumbling while the screen is still all-black. As the track, titled "Heels," evolves into something bigger and ghastlier, we see a random teenage girl bolting through her suburban home's front door, constantly looking over her shoulder at an invisible assailant as she runs in a neighborhood-spanning circle, back into her house, and then straight through the door again and into her car. The scene establishes the It Follows' monster’s ability to only be seen by its target as it slowly walks towards them in the human-looking form of its choosing, and it also cements how effectively Mitchell will utilize Disasterpeace's exceptional score throughout the movie. It Follows' sharpest sound happens during this sequence, when the doomed girl flings the door open, signaling "Heels" to erupt into a flurry of sped-up, fire-alarm-like screeches. The cumulative production impacts like an apocalyptic remix of Psycho's shower sequence.

When It Follows debuted in theaters earlier this year, I wrote a piece that explained how Disasterpeace’s score has brought horror movie music "back from the dead," after years of nondescript orchestral compositions that failed to recapture that old John Carpenter and Goblin magic, not to mention the overall excellence of Jerry Goldsmith's gold-statue-winning The Omen score. But that’s exactly what Disasterpeace has done via It Follows. Come February 28, when the 88th Academy Awards are handed out, it'll most likely be Spotlight composer Howard Shore on the Dolby Theatre's stage. If it can't be Disasterpeace, though, fingers crossed that it's Sicario's Jóhannssonor the legendary, and 87-year-old (!), Ennio Morricone for Quentin Tarantino's The Hateful Eight, in which the iconic The Good, the Bad, and the Ugly music-man does his best work in ages. (Seriously, try to catch The Hateful Eight's 70mm "roadshow"; Morricone's "Overture" is a thing of beauty.)

But much like Tarantino, Morricone is a no-brainer for the Academy of Motion Picture Arts and Sciences, a.k.a. the AMPAS. The film-blogging game's least-savvy Oscar prognosticators can pencil his name in as a definite contender without even seeing The Hateful Eight or hearing a lick of his music for it. He's got Harvey Weinstein's support, Tarantino's partnership, and his own amazingly nearly 60-year career to help push him onto voters' ballots. Disasterpeace and It Follows can't compete against that. But wouldn't it be incredible to live in a world where the Oscars weren't so easily predictable? And where an achievement as grand as Disasterpeace's could be treated with same historic respect as those that aren’t branded with the AMPAS-scaring "horror" tag?

I, for one, am the kind of horror fan who certainly thinks so.

It Follows is now available on DVD and Blu-ray. Disasterpeace's score, meanwhile, is available for purchase on vinyl and is also streaming on Spotify.