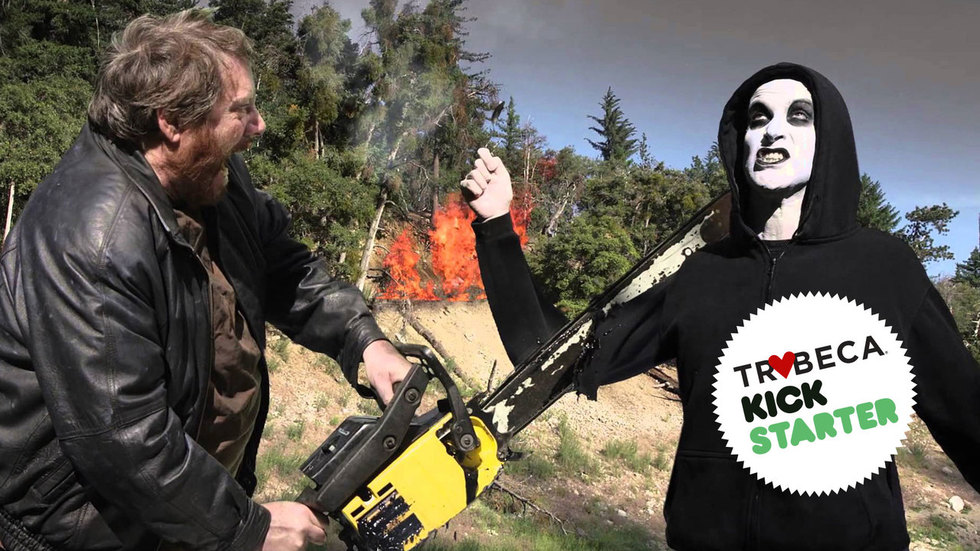 Jason Voorhees has his machete. Freddy Krueger slashes victims with those razor-blade gloves. Leatherface, of course, uses his trusty chainsaw. But wait until you meet Ginosaji, the horribly slow murderer with the extremely inefficient weapon; he's at the center of the 2008 short film titled...wait for it...The Horribly Slow Murderer with the Extremely Inefficient Weapon. Clad in a black hoodie, his face covered in Kabuki makeup, Ginosaji stalks his prey at a snail's pace and with a spoon. And then he repeatedly swats his target with the utensil. There are minor bruises, not bloodshed.

The slasher world needs some new blood, and since the sub-genre relies on an easily reusable formula (stalk, slash, rinse, repeat), it's nearly impossible to make a genuinely scary new slasher movie. (For the best recent effort, seek out Adam Egypt Mortimer's Some Kind of Hate.) So why not abandon scares altogether and just go wild with the humor? That's what filmmaker Richard Gale did with his original Ginosaji short. To date, it's been watched over 28 million times on YouTube. Give the hilarious 10-minute oddity a look here:

Gale has already secured the involvement of horror icon Jeffrey Combs to play a "secret" role; the Re-Animator and Nevermore star has even contributed to the project's official Kickstarter video pitch.

Because a 90-minute movie about a speed-challenged killer smacking a guy with his spoon would be painfully one-note, Gale plans on using the feature to tell Ginosaji's backstory, which, if illustrator Milijov Ceran's concept art is any indication, looks like a marriage between Kill Bill and classic Universal Monsters films:

This has "midnight movie gold" written all over it. It's an idea that's so perfectly suited for short-form filmmaking that trying to stretch it out into a full movie seems ludicrous—which is the best reason to support Ginosaji's Kickstarter. At the very least, it'll be unlike any other movie out there. In a market where, *sigh*, new reboots of the previously rebooted Friday the 13th, A Nightmare on Elm Street, The Texas Chainsaw Massacre, and Halloween franchises are already underway, Gale's commitment to introducing a wildly new kind of slasher villain should be applauded.

To support Ginosaji, head over to its Kickstarter page and donate. And once you've done that, check out (and back!) other Kickstarters we love here.