The 19 Most Creative Movie Tattoos

Inspired by the female protagonist in 'The Broken Circle Breakdown,' we cultivated a list of the most memorable tattoos in all of cinema. 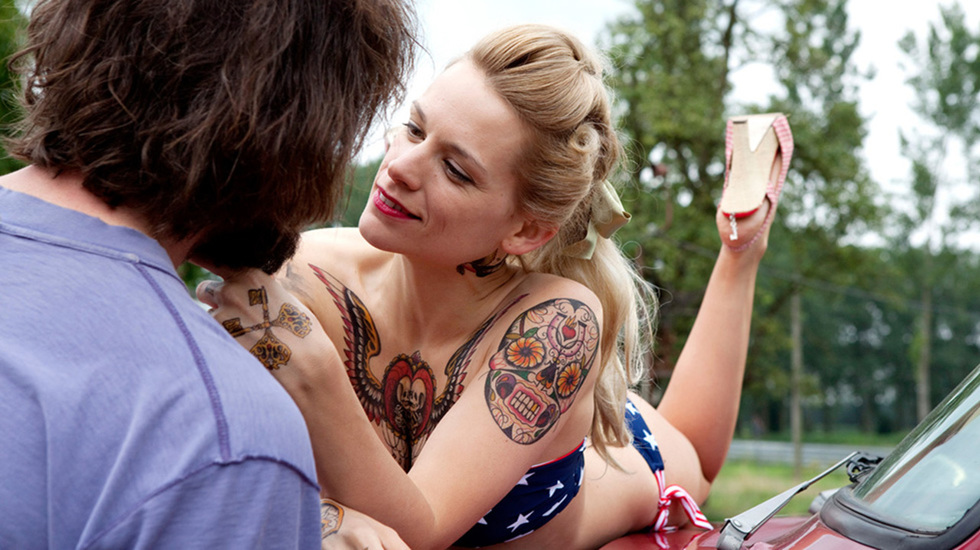 In honor of our film, The Broken Circle Breakdown, its beautiful character Elise, and her intricate body art—we decided to make a list of the most creative tattoos in film.

Ryan Gosling as Luke in The Place Beyond the Pines (2013)

Gosling reportedly asked director Derek Cianfrance (Blue Valentine) if his character could have "the most tattoos in movie history."

In trying to piece together the memories of his wife's murder, Leonard Shelby documents every important detail onto his body. Because Post-its and photographs just weren't enough.

Salander's tattoos are not only an indirect map of her past, but also symbols of strength, revenge, and turning something painful into something beauitful.

Norton's arugably most powerful, memorable character - undoubtedly because of his disturbing tattoos.

They say Fox's body art was inspired by a real-life actress' tattoos.

Mike Tyson would be so proud.

Cameron Diaz as Malkina in The Counselor (2013)

Malkina is derived from the term "Grimalkin," which means "an evil looking female cat."

Not only did Robert Mitchum and Robert De Niro play the same character in Cape Fear (albeit decades apart), but they both made this list.

"Veritas" and "Aequitas" or "truth" and "justice" represent the Saints' M.O. with each kill.

George Clooney as Seth Gecko in From Dusk Till Dawn (1996)

Let's face it. Only Clooney can successfully pull off a tribal sleeve.

Dolarhyde's super intricate back tattoo represents just how precisely and carefully he plans and carries out his murders.

The most replayable moment in movie tattoo history.

You can't take your shirt off and reveal you were the boss of the Russian mob to a room full of interrogating mobsters.  Way to blow your cover.

Johnny Depp as Jack Sparrow in Pirates of the Caribbean: The Curse of the Black Pearl (2003)

Captain Jack Sparrow has the branded "P" so he's identified as a pirate, and of course, a sparrow just to make sure no one forgets his name.

Kurt Russell as Snake Plissken in Escape from New York (1981)

Move over Tyler Durden, Mickey O'Neil is in town and he's fighting for the vengeance of his mum.

Rebel Wilson as Brynn in Bridesmaids (2011)

Wilson never fails to make us laugh at her own (in this case painful and infected) expense.

Rod Steiger as Carl in The Illustrated Man (1969)

Based off of the Ray Bradbury novel of the same name, The Illustrated Man tells a story of Carl, whose elaborate body art shows the places he has been and love he has lost.

Mitchum rocked finger tattoos way before they were cool.

The Broken Circle Breakdown is currently playing in NYC at the Landmark Sunshine Cinema.