The best new movies and repertory screenings for you to check out in NYC this weekend. 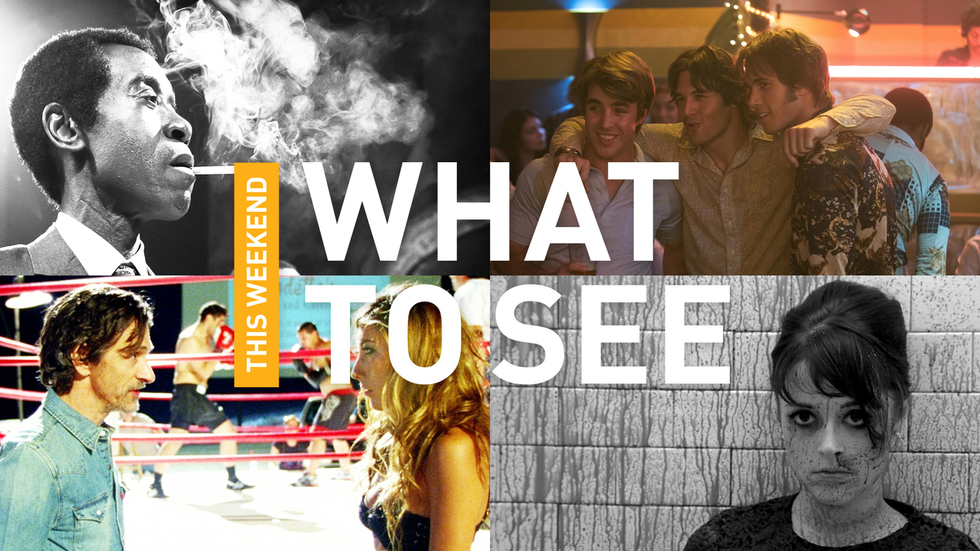 Clockwise from top left: MILES AHEAD, EVERYBODY WANTS SOME, DARLING, and TOO LATE.

Here's your guide for the weekend of April 1 – April 3.

After the doom and gloom of last weekend's Batman v. Superman: Dawn of Justice, we can all use some lighthearted escapism. Like an angel swooping down from heaven clutching golden cups and a huge keg, Richard Linklater has the perfect antidote for that DC-backed misery-fest in Everybody Wants Some, a "spiritual sequel" to his 1993 classic Dazed and Confused that’s really only a follow-up through its sure-handed combination of carefree vibes and A-grade filmmaking. It's another in Linklater’s signature line of virtually big-conflict-free prestige movies, those rare examples of breezy entertainment made by an all-time great director. Think Linklater's Oscar winner Boyhood, but only in that "spiritual" sense—this one's an all-night drunken rager next to Boyhood's even-keeled slice-of-life reflection.

Heavily inspired by Linklater’s younger days as a fun-loving baseball player, Everybody Wants Some is a two-hour trip down a bro-centric memory lane, flashing back to the 1980s to follow a group of skirt-chasing, beer-guzzling dudes as they joyously haze the guy (played by Blake Jenner) on their college baseball team. And that’s the extent of the film’s plot. The charms in Everybody Wants Some have less to do with story and more to do with personalities—whereas films like this made by lesser directors present their sex-crazed men as near-Neanderthals, Linklater and his uniformly excellent cast of relatively unknown actors give Everybody Wants Some's rowdy bunch an abundance of heart, soul, and likability—unlike Zack Snyder’s Batman and Superman. Call these bros the "Just Natty-Ice League."

On paper, Miles Ahead looks like the kind of movie that Oscar bloggers would salivate over. It's a biopic about a complicated musical icon (Miles Davis), starring an Oscar-nominated actor (Don Cheadle) who’s also making his directorial debut (the Academy loves a good do-it-yourself tale when its anchor is an A-lister). But the film's April release isn’t the only reason why it doesn’t stand a chance at making a dent in next year's Oscar scene—it’s too unwieldy and dirty to ever sing to the AMPAS’ ears. Which is largely what makes Miles Ahead so damn exciting.

A longtime passion project for Cheadle, Miles Ahead scraps all of the usual biopic clichés, namely the cradle-to-the-grave structure, to capture Davis' notoriously anarchistic spirit over the course of two days in 1979, at the height of the jazz great’s cocaine abuse and general recklessness. There's a car chase, gunplay, and heavy profanity, all interspersed with softer flashbacks to Davis' love affair with his first wife, Frances Taylor (Emayatzy Corinealdi). Cheadle's scatterbrained approach breeds problems, with much of the all-over-the-place Miles Ahead feeling like it's been edited in a spin cycle. But in a time when embarrassingly archaic biopics like I Saw the Light still exist, Cheadle's anything-goes energy feels refreshingly against-the-grain.

Where to see it: Landmark Sunshine Cinema

Darling, written and directed by the tireless and on-the-rise filmmaker Mickey Keating, could have easily been yet another one-note horror pastiche. Shot in black-and-white and pitched as a psychological throwback to '60s films, Keating’s third feature seemed, at first glance, like it'd simply be a promising young director's cinematic love letter to Roman Polanski's one-two punch of Repulsion and Rosemary's Baby and everything Stanley Kubrick ever made. Reverent, but not original. Lauren Ashley Carter plays a mentally disturbed woman who accepts a caretaker job inside a spacious Manhattan mansion; left on her own, she slowly loses her mind. Does the madness stem from the locked room upstairs? Does it have anything to do with the urban legends about the mansion’s history with the occult? Or is she just plain old bug-nuts?

On paper, Darling sounds like every other women-going-crazy horror movie out there, but Keating's film is anything but ordinary. Whereas his two earlier films, the satanically tinged Ritual (2013) and the paranoia-laced sci-fi/horror Pod (2015), were mixed bags with frequent dashes of high-level scares found amidst narrative stumbles, Darling is a quantum leap forward both stylistically and technically. Using Polanski and Kubrick as jump-off points, Keating accelerates Carter's character's descent into dangerous hysteria with a plethora of disorienting flourishes. The occasional strobe-light effects give the film a hallucinogenic aura; violent cutaways to close-ups of Carter's screaming face and unknown corpses lend Darling an unpredictability that's electric.

Where to see it: Village East Cinema

Comparisons to Quentin Tarantino are unavoidable with Too Late, writer-director Dennis Hauck’s impressively ambitious debut. Like The Hateful Eight's special 70mm release, Too Late was shot on, and is being released on, 35mm; like all of Tarantino's films, it's full of extended sequences driven by snappy dialogue that simultaneously feels organic and meticulously scripted; and like Pulp Fiction, it's a twisty neo-noir crime story whose most luminous character is the city of Los Angeles. But none of those are the QT connection that gives Too Late its lovable magnetism. The film's ace-in-the-hole is Hauck's unabashed affection for cinema; Too Late oozes with the blood of the movies.

Structurally, it’s as bold as hell. Too Late is comprised of five 20-minute single takes, each devoid of any CGI or cuts and sequenced out of chronological order. John Hawkes, who’s at his all-time best here, plays Sampson, a ramshackle private eye who's investigating the murder of a young stripper (Crystal Reed, from MTV’s Teen Wolf) whom he befriended years earlier. The search finds Sampson crossing paths with low-level drug dealers, a misogynistic strip club owner, a sadistic pseudo-philosopher, and other LA degenerates, and there are poolside shootouts, secret identities, and a multitude of dangerous scenarios right out of an old Raymond Chandler novel.

Some of the dialogue sounds like Tarantino's first-draft scraps, and some of the characters and plot turns go overboard with their noir trappings, but that's all secondary to Too Late's underlying sense of filmic euphoria. Hauck puts his obsession over cinema on blast. One of the five segments takes place at an old-school drive-in theater that’s showing Carnival of Souls, and whose projection booth prominently features a poster for Abel Ferrara's Ms. 45; a lunk-headed drug pusher goofily waxes poetic about Don't Tell Mom the Babysitter's Dead; other characters namedrop the LA cinepehile destinations the Egyptian and the New Beverly, the latter of which is owned by none other than, that's right, Quentin Tarantino.

Where to see it: Village East Cinema