Home » Tribeca News » Who is Saul Williams? Meet The Modern-Day Renaissance Man Who is Redefining Hacker Culture
View All News

Who is Saul Williams? Meet The Modern-Day Renaissance Man Who is Redefining Hacker Culture

The push behind MARTYR LOSER KING kicks off with the premiere of Williams' new music video, "Burundi." But you might not understand just how big of a deal he is. We're here to fix that. 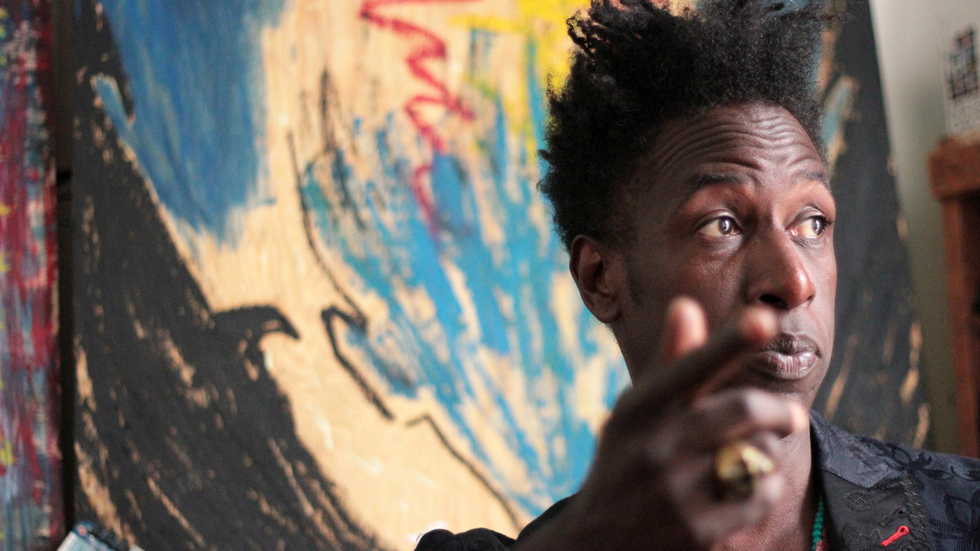 It’d be impossible not to feel at least a little inadequate in comparison to Saul Williams, a modern-day renaissance man who wears more hats than the New York Yankees' starting lineup. But that’d be missing the point, because above all else, Williams is a motivator. When he speaks, you know it's time to think bigger.

Constantly being ahead of the curve has been the story of Williams’ career. Hailing from Newburgh, in Upstate New York, the 43-year-old innovator has been a permanent fixture in the poetry scene since the mid-’90s, when he and fellow prolific wordsmiths like Beau Sia and Jessica Care Moore turned Alphabet City’s Nuyorican Poets Café into a cultural institution, bleeding over into his appearances on HBO's Def Poetry Jam. On that same tip, he's won awards as a beat-minded actor, filmmaker and public speaker, most notably with his 1998 breakthrough feature Slam and through live performances everywhere from the White House to the Sydney Opera Center and the Louvre.

And that’s just scratching the surface. Away from stages and big screens, Williams has published five books of poetry and currently stands as one of the highest-selling poets of all time, in the same league as Maya Angelou and Billy Collins. He’s also a genre-blurring singer/rapper/whatever-you-want-call-it who’s released albums with Trent Reznor (he of Nine Inch Nails and Oscar-winning The Social Network score fame) and super-producer Rick Rubin (Jay Z, Eminem, Red Hot Chili Peppers, the Beastie Boys, Lady Gaga, Adele, Aerosmith and basically anyone else who matters in the music industry).

Feeling inadequate yet? Well, get ready to also feel dizzy. Williams’ latest endeavor, the result of multiple years’ work, is essentially all of his interests merged into one artistic behemoth. Titled MartyrLoserKing, it’s a sky-high-concept that’s backed by an album in September, an upcoming graphic novel with illustrations by the acclaimed Ronald Wimberley and a national live-performance tour that just wrapped up last month.

Williams conceived MartyrLoserKing's title character, a cyber hacker living in the East African country of Burundi who builds a Frankenstein’s Monster-like super-computer from the parts of abandoned desktops, teaches himself how to code and develops an online cult following. He’s in love with a transgender woman named Neptune Frost and hosts a cryptic and anarchist podcast, through which his eventual hacks into Google and the Pentagon turn him into Public Enemy No. 1, a kind of militant Edward Snowden.

For a sample of what's to come, check out MartyrLoserKing's first official video for the single "Burundi," along with Williams' thoughts on why that country needs your attention. SEE THE BURUNDI VIDEO HERE

To fully appreciate MartyrLoserKing’s grandiose ambition and next-level genius, you should first better understand its creator’s already sterling and incomparable resume. Here's a few of Saul Williams’ coolest past moments and cultural imprints, the seeds through which MartyrLoserKing is set to bloom.

The Tie That Binds Many of Your Favorite Rappers
When Kanye West detonated his Yeezus bomb onto the world in June 2013, the critical response was uniformly positive. A stark departure from his previous music, Yeezus is West’s industrial hip-hop rebel yell, putting one of rap’s most recognizable names/faces in a new, experimental, aggressively anti-commercial space—a space that Saul Williams had been occupying since 2000. Appropriately, some critics pulled back from anointing West as a supreme innovator and called Yeezus out for mimicking what Williams had been already been doing.

Because, again, Williams has been ahead of his time for the better part of the new millennium. Mainstream listeners haven’t necessarily been up on his forward-thinking music, but his peers and hip-hop’s new wave certainly have. Williams has worked and/or shared stages with Nas, The Roots and, bringing things full circle here, Yeezy.

As for hip-hop’s youth, Williams recorded a track with the then-unknown Chicago rapper Vic Mensa in 2010, five years before Mensa joined Kanye to perform the latter’s “Wolves” during NBC’s SNL 40 special. NYC underground phenom Joey Bada$$ took his Williams appreciation a step further than Mensa had when, in 2013, his EP Summer Knights featured a song titled “Amethsyt Rockstar,” a tip of his Pro Era cap to Williams’ 2001 album Amethyst Rock Star.

Going Toe-to-Toe with Stephen Colbert
Oh, wait… Did we also mention that Saul Williams is a critically lauded Broadway star? That feat happened last year with hip-hop’s first Broadway musical, Holler If Ya Hear Me. The original fictional play was based on the late Tupac Shakur’s songs and lyrics. Williams starred as an ex-con looking to go straight in an unnamed Midwest inner city. The play caught the attention of Stephen Colbert, whose Colbert Report team invited Williams on the show as a guest. And Williams brought his “academically strapped” A-game.

Williams—who, according to Colbert, has “class out the ass”— demystified himself by being quick-witted and really damn funny. He joked about making that “Maya Angelou” money (a whopping $3.68) from the sales of his poetry books, not having to beat out hologram 2Pac to secure Holler If Ya Hear Me’s leading role explained Slam poetry’s three-minute structure and overall guidelines.

Colbert: “Does it have to have rhythm?”
Williams: “No, you can do it.”

Conquering the Sundance Film Festival as a Rookie Actor
In 2013, Ryan Coogler’s devastating indie film Fruitvale Station prefaced the #BlackLivesMatter movement by capturing the tragic last days of Oscar Grant, the 22-year-old unarmed Black man who was killed by a police officer in Oakland, California. Its star, Michael B. Jordan, has since gone on to become a Fantastic Four superhero and the new face of the Rocky franchise, while Coogler has been on the front-lines with the likes of Ava DuVernay in the charge against Hollywood’s longstanding racial inequalities.

Back in 1998, Saul Williams had a similar experience. His feature film debut, Slam, took home that year’s Grand Jury Prize for its gritty yet humane and uplifting portrayal of prison life, told heavily through Williams’ brand of Nuyorican-tested poetry. In his New York Times review of the film, critic Stephen Holden described Williams’ character, Ray Joshua, as “the Washington inner-city equivalent of working-class screen heroes like Tony Manero and Rocky Balboa,” exuding a “sanctified fervor reminiscent of Bob Marley.”

Slam wasn’t Williams’ only film festival award tour stop. Having recently lived in Paris for four years, Williams starred in the French-language film Aujourd'hui- TEY, about a man who leaves America and visits the streets of Senegal where he was raised one last time before he dies. The film won the Prize of the City at the 2013 Venice Film Festival, and Williams became the first African-American to win Best Actor at FESPACO, Africa’s largest film fest.

Trailblazing the Internet’s Now In-Vogue New Album Download Strategy
History and ever-grateful music fans’ download histories will show that Radiohead were the revolutionary trend-setters behind the pay-what-you-want album rollout plan. In October 2007, the alt-rock grop released their seventh record, In Rainbows, for free or whatever price buyers wanted to pay online. Whereas listeners and consumers were elated, the music industry was, understandably, shaken and bewildered.

Not Saul Williams, though. Around that same time, Williams was ready to drop his third album The Inevitable Rise and Liberation of NiggyTardust!, a progressive batch of industrially tinged hip-hop by way of hard-edged rock wholly produced by Trent Reznor. Less than a month after Radiohead’s crazily successful In Rainbows release, Williams and Reznor put The Inevitable Rise and Liberation of NiggyTardust! on NiggyTardust.com for free download or a recommended $5 purchase, to “support the artists.”

Traces of what Radiohead, Williams and Reznor did back in 2007 can be found in the hoopla around recent albums like Beyonce’s 2013 self-titled record and Drake’s If You’re Reading This It’s Too Late, both of which skipped the traditional retail-first platform in favor of digital premieres.