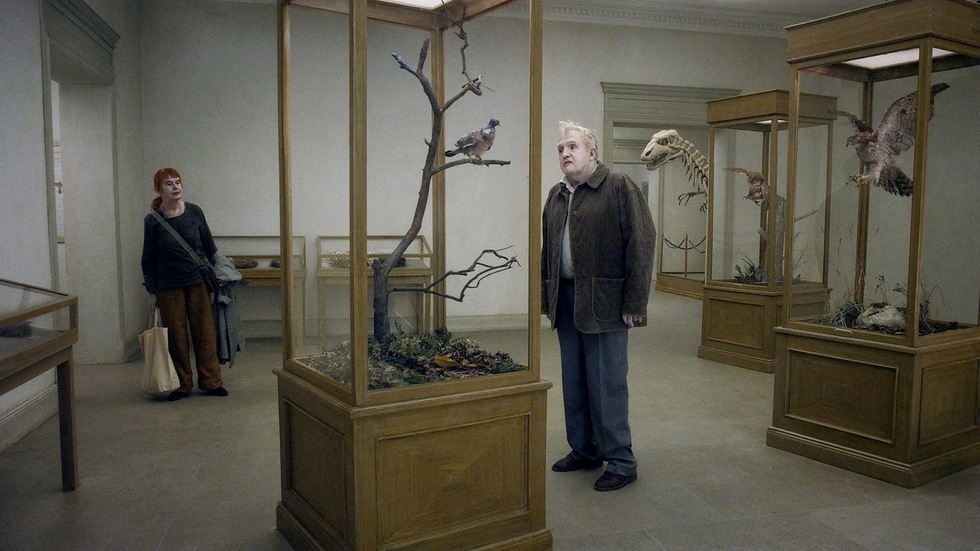 Curated by Tribeca Film Festival Assistant Programmer Jule Rozite, Painting Cinema will screen Akerman's Hotel Monterey, Anderson's The Royal Tenenbaums, and Andersson's A Pigeon Sat on a Branch Reflecting on Existence for two showings each from now until mid-December.

Inspired by the work of Danish painter Vilhelm Hammershøi, whose singular vision continues to resonate with contemporary artists, writers, and filmmakers nearly a century after his death, Painting Cinema looks at a selection of films that highlight Hammershøi's unique aesthetic and cinematically reimagine some of his central themes.

The series began back in late October with Thomas Vinterberg's The Celebration, Yasujirō Ozu's Tokyo Story, and a six-wide series of shorts.

Eclectic and inimitable films all of them, but the ones that remain are far from slim pickings. By now, everyone knows and loves The Royal Tenenbaums enough to have likely contemplated dressing as Margot Tenenbaum for Halloween on many a year. (Maybe next year...)

But Andersson's Pigeon is just as stylistically idiosyncratic as even the best work of the American auteur who shares his surname, minus an "s." The Swedish Andersson creates curio characters and life-size dioramas that are just as impeccably-detailed as Anderson's and, in Pigeon, confers a risky and abnormal cinematic experience, that is — quite literally — unlike anything else you'll see this year at the movies... and how rarely can you say that and actually mean it?

Pigeon, which won the Golden Lion at the 2014 Venice Film Festival, was also recently selected as Sweden's official Foreign Language submission for this year's Academy Awards. Pigeon ends the Painting Cinema series, which will subsequently be followed by an exclusive showcase of fellow Nordic Oscar contenders, a collection that includes everything from Roar Uthaug's The Wave to Klaus Härö's The Fencer and runs from early January to mid-February.

And then there's Hotel Monterey, the boldly intimate yet unmawkish experimental documentary that is the first feature of the late Chantal Akerman, who passed away at the age of 65 this past October. A debut as seminal as Hotel Monterey, from a visionary as paramount in film history as Akerman, should be seen and relished by everyone. There is simply no better way to honor this goddess than through the films that she so bravely and definitively burned into being. And there is no better time to start doing so than the present.

Hotel Monterey plays at Scandinavia House this Wednesday, November 18th, and this Friday, November 20th, with Tenenbaums and Pigeon following in the weeks after. Click here to see more showtimes and information about Painting Cinema. Tickets are only $10! ($7 for members.)