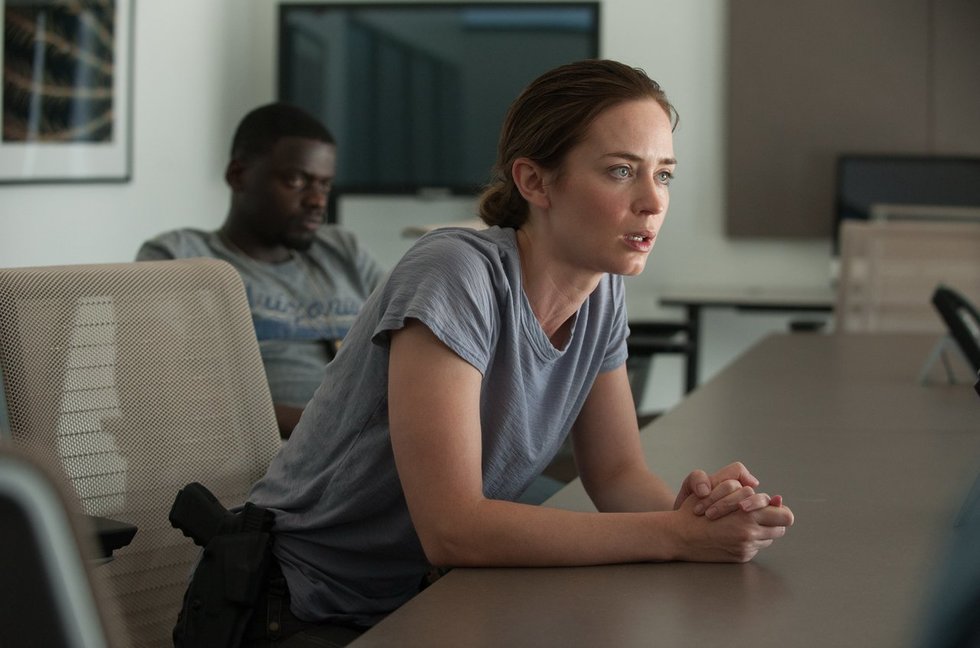 The nightmare fuel pumps steadily in Sicario, the new film from director Denis Villeneuve, whose two previous efforts, Enemy and Prisoners, had already cemented the Canadian filmmaker as film’s most exciting new all-darkness-everything voice. But the film’s opening scene dumps the fuel all over the audience members’ heads. Emily Blunt, playing an FBI kidnap response team leader, heads a tactical unit that’s investigating an Arizona drug cartel's decrepit, desert-bound hideout. A misfired bullet cuts a hole through one of the room’s walls, exposing the location's horrific secret: there are dozens of corpses stuffed inside the walls, their heads wrapped in plastic bags. Villeneuve closes in on the bodies, to emphasize the scene’s ghoulishness. It's terribly gruesome, and tough to shake off.

And Sicario never lets up from there. As a whole, this is soul-crushing material, but it’s also masterfully executed and acted with no-nonsense bravura by Villeneuve’s first-rate cast. Blunt’s character, Kate Macy, is the Capt. Willard in Sicario’s Apocalypse Now-like hell-storm of bleakness. Recruited into a top-secret C.I.A. team's fold by its charismatic and playfully elusive leader (Josh Brolin), Kate says goodbye to morals, optimism, and all hope as she assists in the team’s search for a notorious Mexican drug overlord. Her mission is made all the more complicated by the involvement of Alejandro (Benicio del Toro), a Colombian badass whose quietness hides a very particular kind of vengeful bloodlust. The deeper Kate gets, the less she’s told by her superiors.

Similarly, the further Sicario delves into its corpse-ridden cynicism, the less Villeneuve cares about the viewer’s enjoyment. This is the kind of film you marvel at more so than smile towards. Often unbearably intense, Sicario uses its plot beats to pad a series of crazily visceral set-pieces, including a shootout on a crowded Mexican highway that should be taught in film schools as a master's class in how to tighten one’s cinematic grip before fire-bombing the release valve. Much like the entirety of Sicario, which builds into a nerve-shredding climax where nobody’s safe, not kids nor innocent bystanders, and hopelessness reigns.

You won’t immediately leave the theater once it ends—you'll just sit there, frozen, paralyzed by the nihilism. In the end, the only difference between Sicario’s viewers and its opening cadavers will be the baggies covering the latter group's craniums.

Where to see it: Opening at the Regal Union Square 14, AMC Empire 25, and AMC Loews Lincoln Square 13