New York City's R&amp;B queen unveiled her new documentary, THE LONDON SESSIONS, and treated the festival crowd to one hell of a concert. 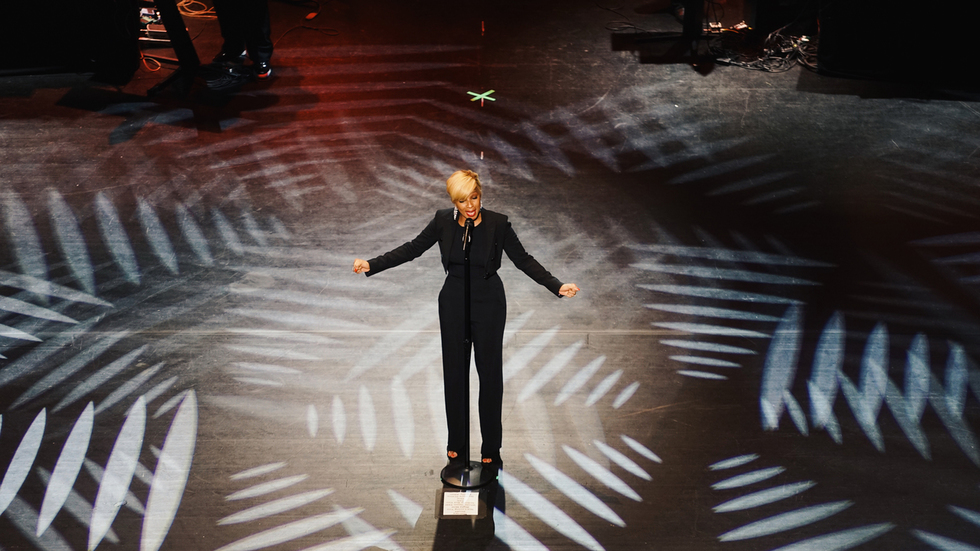 If the 2015 Tribeca Film Festival’s Saturday-Night-Live-heavy Opening Night was all about tickling the funny bone, TFF’s second night was aimed directly at the heart.

The dedicated longtime“Queen of Hip-Hop Soul,” reigned over Beacon Theater. The emotionally charged premiere matched last year’s Time is Illmatic blowout in musical strength, but also one-upped Nas’ 2014 celebration in terms of raw energy. The woman of the hour was Mary J. Blige, making her first-ever Tribeca Film Festival appearance in honor of the new documentary Mary J. Blige – The London Sessions, a brisk, 45-minute making-of look at the singer-songwriter’s Summer 2014 sabbatical in England to record her 13th album, The London Sessions. Presented in striking black-and-white by director Sam Wrench, the film plays like a glorified VH1 Behind the Music, showing Blige writing records and laying down tracks in studios with English artists like Sam Smith, Disclosure, and Emeli Sandé.

Vacating her usual New York City and Los Angeles recording locales was a big risk for Blige, who uprooted her entire game for 20 days out of her comfort zone in London. Wrench’s film captures Blige's initial unease, accentuated by conversations with her Capitol Records boss Steve Barnett and go-to producer Rodney “Darkchild” Jerkins. The reason for Blige’s relocation: inspirational freedom. When one of her drivers asks why she’s in his native land, near the beginning of the documentary Blige answers with, “The music is free over here, like it's how it used to be in the states,” echoing the sentiment that Blige’s music began, at least in her mind, feeling stagnant until she first heard Disclosure and Sam Smith’s radio smash “Latch” and caught a tidal wave of motivation.

SEE PHOTOS FROM THE RED CARPET, CONCERT & AFTER PARTY HERE

Other artists may have lost their identities in a similar situation, but the huge career gamble proved to be nothing for Blige, an open book of an R&B star who’s never attempted to shroud her past addictions, dark days, and suicidal thoughts. “She’s had challenges,” says Darkchild to Wrench’s camera, “so when you’ve faced challenges and always beaten them in your life, this [trip to London] is just another check …mark!”

The results, of course, were triumphant—music critics unanimously praised The London Sessions as Blige’s best album in nearly a decade. Wrench’s film shows that there couldn’t have been any other outcome for the audacious, career-rejuvenating record. In the writing sessions for the track “Doubt,” Blige breaks down in tears while hearing the lyrics sung to her for the first time, proclaiming that the song is “a gift from God.” As she, Sam Smith, and songwriter Jimmy Napes vibe to the first cut of the uptempo club track “Nobody But You,” Blige emphatically describes it as a “song that makes me want to dance but it also makes me want to cry.” Taking a break from the studio, Blige has a heartfelt and mutually appreciative lunch with Mitch Winehouse, the father of the late English songstress Amy Winehouse, who Blige both adored and sympathized with, the latter in regards to how both women battled personal demons. “By hugging Amy’s father,” says Blige, “I had a chance to hug Amy, so now I’m even more inspired.”

Unsurprisingly, The London Sessions concluded to rapturous applause from the Beacon crowd, with the ladies in attendance undeniably besting the fellas with loudness, and naturally so. Blige has always been a pillar for women who’ve endured the same kinds of struggles as the ones heard in her songs. “Whether it be the woman who’s in pain or the woman coming out of it, she’s been through it all,” says Darkchild near the end of The London Sessions, “She’s their voice.”

And with that voice, Blige figuratively tore the Beacon Theater down with a fiery concert once the film ended. In the spirit of MTV’s old Unplugged series, Blige’s live backing band led her through a handful of The London Sessions tracks, all prefaced by brief intros from Blige explaining what each song means to her. Her most candid moment came after “Whole Damn Year,” which includes the lyrics “bad to the liver” in its hook—explaining the song’s meaning, she told the crowd, “That means ‘liquor,’” hinting at her past bouts with alcoholism and following the clarification with a I’m-just-keeping-it-real shrug.

The night’s highpoint, though, came during Blige’s rendition of her powerful 2002 hit single “No More Drama,” in a performance that might as well of been billed as “featuring The Holy Ghost.” She didn’t just hit every high note—she pulverized each one; and she didn’t simply convey the song’s visceral honesty—she momentarily turned into a pastor and treated the Beacon like the most raucous congregation imaginable.

The crowd rewarded Blige’s “No More Drama” showstopper with an extended round of thunderous applause, in response to which Blige had to fight back tears. “When people respond like this,” she told the room, “it means you’ve affected their lives. And you’ve affected mine, so thank you.”

@therealmaryjblige at the @beacontheatre is a life-changer! Such a beautiful film and performance tonight, keep an eye out for video footage of the show on our site tomorrow! @americanexpress #tribecatogether
A video posted by Tribeca Film Festival (@tribeca) on Apr 16, 2015 at 6:50pm PDT

Wish you could’ve seen Blige’s soul-charged TFF debut in person? Stay tuned for exclusive video clips from last night’s event that are sure to be the “Therapy” you’ll need.