Here Are the 12 Films in the World Documentary Competition

We can finally share the 12 non-fiction films that will compete in this year's World Documentary Competition, with 'Dior and I' as the opening night film. 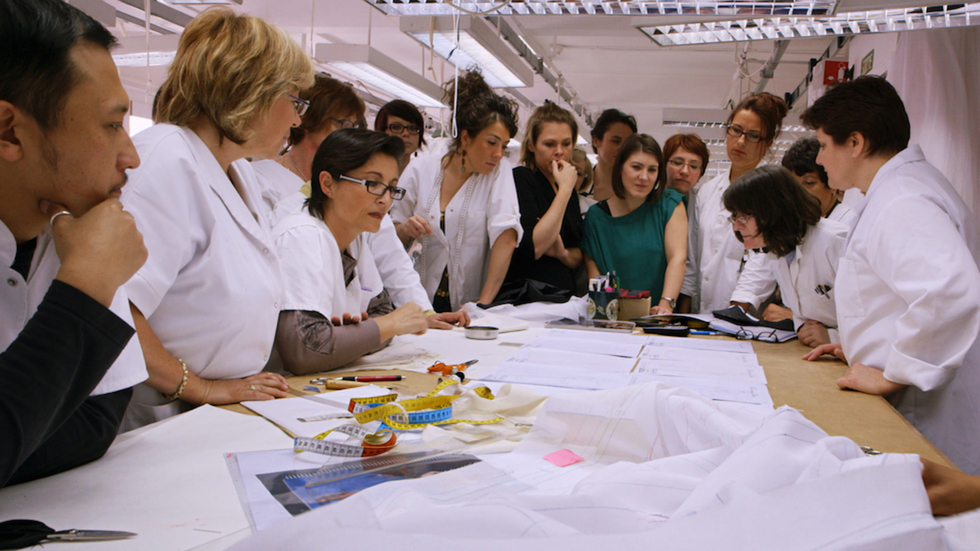 The 2014 film selection includes feature films from 32 countries, including 55 World Premieres, 6 International Premieres, 12 North American Premieres, 9 U.S. Premieres and 5 New York Premieres. A total of 102 directors will present feature works at the Festival, with 37 of these filmmakers making their feature directorial debuts.  Among these directors, 22 are women. The 2014 film slate was chosen from a total of 6,117 submissions.

This year, 12 narrative and 12 documentary features making their North American, International, or World Premieres will compete for cash prizes totaling $215,000, as well as artwork from the Artists Awards program sponsored by Chanel, featuring donated work from contemporary artists.

The 12 films of this year’s World Documentary Competition are typified by depth of character and beauty in form. Character studies exploring creative geniuses like the prodigy choreographer of Ballet 422, the freshman Artistic Director of fashion institution Dior in Dior and I, and iconic thinker and New Yorker Susan Sontag, all unfold through lush photography and thoughtful direction. These films celebrate the accomplishments of the individual, mirroring the thread of stories that espouse the power of groups in this year’s competition. A team of Indian traditional artists rally to protect their community threatened with displacement in Tomorrow We Disappear, while a vivacious gang of transgender women demand equal rights from the Puerto Rican government in Mala Mala, and activists risk everything for their cause in 1971. This riveting collection of international stories compete for Best Documentary Feature, Best New Documentary Director, and Best Editing.

Forty years before WikiLeaks and the NSA scandal, there was Media, Pennsylvania. In 1971, eight activists plotted an intricate break-in to the local FBI offices to leak stolen documents and expose the illegal surveillance of ordinary Americans in an era of anti-war activism. In this riveting heist story, the perpetrators reveal themselves for the first time, reflecting on their actions and raising broader questions surrounding security leaks in activism today.

Cinematographer and documentarian Jody Lee Lipes crafts an intimate, fly-on-the-wall documentary offering a rare peek into the hidden world of professional ballet. The film shadows Justin Peck, wunderkind choreographer of the New York City Ballet, as he undertakes the Herculean task of creating the company’s 422nd original piece. Following the creative process from its embryonic stages to its highly anticipated premiere, Ballet 422 is a powerful celebration of the skill and endurance of New York’s most talented dancers—as well as those who remain hidden in the wings.

In Frederic Tcheng’s masterful documentary, one enters the storied world that is the House of Christian Dior with a privileged, behind-the-scenes look at the creation of Raf Simons’ first Dior Haute Couture collection as Artistic Director, a true labor of love by a dedicated, charming, and often humorous group of collaborators. Beautifully melding the everyday, pressure-filled components of fashion with a mysterious and elegant reverence for the history of this iconic brand, Tcheng’s colorful homage to the seamstresses of the atelier is nothing short of magical. In English and French with subtitles.

The iconic voice and noble philosophies proffered by Harry Dean Stanton punctuate this authentic look at life on the edge of wilderness. Producer of festival favorite Two Gates of Sleep, Andrew Renzi makes his directorial debut with this glimpse into the rugged lifestyle few Americans still pursue. Follow the cowboys of Montana’s Fishtail Basin Ranch as they survive another calving season in this captivating atmospheric documentary. Set to a seraphic score, Stanton would agree, this is a film for “those of earth-born passion.”

Twenty years ago, Garnet Frost nearly lost his life hiking near Scotland’s Loch Arkaig. The near-death experience still haunts him to this day, and, in particular, a peculiar wooden stick he discovered serendipitously right before he was rescued. Believing the staff (as he calls it) is actually a marker for a fortune hidden nearly 300 years ago, Garnet embarks on a treasure hunt to search for the lost riches. But beneath the search for gold lies a poignant pursuit for life’s meaning and inspiration.

Antonio Santini and Dan Sickles’ vibrant and visually striking immersion in the transgender community of Puerto Rico celebrates the breadth of experiences among trans-identifying women: from campaigning for government-recognized human rights, to working in the sex industry, to performing as part of the drag troupe “The Doll House.” Unapologetic and unconventional, Mala Mala explores the ways internal and external identity pave the path of self discovery through the unique yet universal stories of its fascinating cast of characters. In English and Spanish with subtitles.

For almost 50 years, the world's population has grown at an alarming rate, raising fears about strains on the Earth's resources. But how true are these claims? Taking cues from statistics guru Hans Rosling, Misconception offers a provocative glimpse at how the world—and women in particular— are tackling a subject at once personal and global. Following three individuals, director Jessica Yu focuses on the human implications of this highly charged political issue, inspiring a fresh look at the consequences of population growth. In English, Hindi, Mandarin, and Russian with subtitles.

Left by his wife for another man, Marcel falls into alcoholism and a deep depression, with only his friend Bob, also an alcoholic, to look after him. The friendship between the two men captures the frailty of the male ego and the natural comedy borne from their candid conversations. Ne Me Quitte Pas follows this downward spiral of mid-life crisis in a tender, often humorous, sometimes disturbing examination of the ‘crisis of masculinity,’ alongside a mesmerizing exploration of mundane rural existence. In Flemish and French with subtitles.

In 2011, unassuming Matthew VanDyke left his home in Baltimore to find adventure and see the world on his motorcycle, only to end up joining the Libyan rebel army to take arms against Gaddafi. Gun in one hand, video camera in the other, Matthew finally finds purpose and meaning in his wanderlust, until he is captured and held in solitary confinement for six months and must decide where his allegiances really lie. Director and TFF award winner Marshall Curry (Racing Dreams) captures one man’s arresting transformation from a sheltered kid to a soldier on the front lines.

Hungry for life and gracefully outspoken throughout her career, Susan Sontag became one of the most important literary, political, and feminist icons of her generation. Kates’ in depth documentary intimately tracks Sontag’s seminal, life-changing moments through her own words, as read by Patricia Clarkson—from her early infatuation with books to her first experience in a gay bar; from her first marriage to her last lover. Regarding Susan Sontag is a nuanced investigation into the life of a towering cultural critic and writer whose works on photography, war, and terrorism still resonate today. An HBO Documentary film.

The puppeteers, performers, and magicians of the Kathputli colony in Delhi are the last slum-dweller–artists of their kind. When their land is sold to high-rise developers, they must fight for the only home they know. Fending off relocation, they struggle to keep their mystical Indian folk arts alive and to conserve what beauty remains as they are forced into someone else’s vision of the future. Tomorrow We Disappear is not just documentation, but ultimately becomes an extraordinary act of preservation. In Hindi with subtitles.

Virunga is Africa’s oldest national park, a UNESCO world heritage site, and the last natural habitat for the endangered mountain gorilla. None of that will stop the business interests and rebel insurgencies lurking at the park’s doorstep. Orlando von Einsiedel pairs gorgeous natural scenes from Virunga with riveting footage of the Congolese crisis, raising an ardent call for conservation as a vital human enterprise. Along the way, he spotlights the incredibly dangerous work that is often required to safeguard the environment. In English, French, and Swahili with subtitles.

Advance selection ticket packages and passes are now on sale for American Express Card Members, and go on sale Monday, March 10 for the general public. Go to our box office site for info on tickets, passes and ticket packages.