Home » Tribeca News » Tom Hanks Lived Up to His "Storyteller" Status, With John Oliver's Help, at Tribeca 2016
View All News

Tom Hanks Lived Up to His "Storyteller" Status, With John Oliver's Help, at Tribeca 2016

The laughs and memories flowed endlessly throughout the Festival's final Storytellers conversation of 2016. 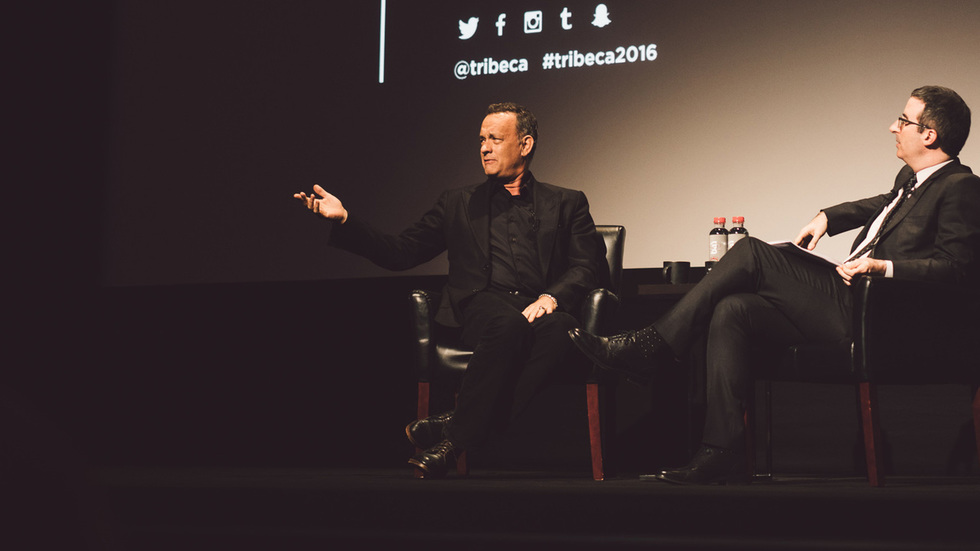 There are two questions that Tom Hanks absolutely loathes, both of which plague all of his films' press junkets and media obligations: “What was it like to blah blah blah,” and, “What was your favorite blah blah blah…”

Seconds after Hanks humorously laid down that gauntlet, his Tribeca Talks: Storytellers interviewer, HBO late-night host and all-around brilliant funnyman John Oliver, replied with, in defeat, “Shit,” as if those were the exact two questions he was about to ask.

They weren’t, of course, but that exchange received big laughs inside the John Zuccotti Theater @ BMCC yesterday, from a packed audience that included a woman holding a “Kiss Me” sign for the two-time Oscar-winning actor/director/producer. No comedic slouch himself, Hanks kept up with the hilarious Oliver, whose Sunday night news show Last Week Tonight is one of Hanks’ personal favorites. Without Oliver, the Hologram for the King star said, “Our lives would be void of outrage.” He then jabbed at Oliver by saying that Last Week Tonight’s live studio audience taps out at a paltry “17” people, as if it’s a modern-day Merv Griffin Show. "How hip this talk has begun," joked Hanks, “with a Merv Griffin reference.” Without missing a beat, Oliver clapped back with, “The ‘Kiss Me’ sign just slowly went down.”

That kind of loose and witty banter carried itself through the entirety of Hanks and Oliver’s hour-long conversation, which covered the former’s penchant for producing historical miniseries, the lessons he's learned from creative failures, and his approach to artistic collaborations. With each response, Hanks exemplified the “Storyteller” tag, delivering one entertaining anecdote after another.

That time Tom Hanks' parents disqualified themselves from any Parent of the Year awards…
John Oliver's opening question was fairly standard, though still great fodder for a Hanksian™ anecdote: "What was the first movie that little Tommy Hanks ever saw?"

The resulting story was priceless. Hanks discussed how, when he was four or five years old, he, his brother, and his sister were dropped off at the local movie theater by their parents, who were going through a prolonged rough patch and heading towards a bitter divorce. Thus, the elder Hanks couple weren’t exactly paying vigilant attention to the smaller details when it came to their kids’ plans. They thought that "little Tommy Hanks" and his siblings were watching 101 Dalmatians, but little did their parents know that Disney's pooch-powered animated flick had already been replaced with something new, and that something wasn’t exactly child-friendly.

Traumatically, the young Hanks was subjected to the terrifying British horror movie Scream of Fear, which featured an image that remains burned into Hanks' mind: an old man’s corpse sitting in a rocking chair at the bottom of a weed-filled pool.

Once Hanks finished recounting that nightmarish sight, Oliver emphatically asked the obvious question: "How the fuck did you become an actor after that?"

That time Kevin Bacon made him laugh hysterically…
One of Oliver's questions touched on Hanks’ impressive track record of first-rate collaborators both behind and in front of the camera, and how he goes about choosing his work colleagues. Hanks considers himself to be a "logic policeman" when it comes to a film’s script, and his criteria for selecting collaborators simply boils down to a person's "understanding of the [film's] logic."

And occasionally, the people who fit that bill also happen to be hilarious. Hanks recalled a moment on the set of Apollo 13 when director Ron Howard was struggling to figure out a specific set-up and shot. Kevin Bacon, one of Hanks' main co-stars in the film, pulled Howard aside and gave him some advice: "The shot should be a BFC right here." Howard, understandably, looked dumbfounded, and said, "What's a BFC?" Bacon’s response: "A big fucking close-up of Kevin Bacon."

That time Tom Hanks was nearly stumped by one of his fans…
Hanks is, of course, a man of many undying quotables. For starters, there's Castaway's "Wilson!" and Apollo 13's "Houston, we have a problem." But when Oliver asked Hanks to cite the most random reference someone has ever shouted at him, the actor delightfully went super obscure, yelling, "Little boat!"

Not sure which of Hanks' films that line is from? Don't feel bad—Hanks didn’t know at first, either. "I was sweating bullets,” he told Oliver about the nerve-wracking drive home after another driver screamed those two unexpected words at him while on a Los Angeles highway. "I almost had to go to IMDB!" Not long after, thankfully, Hanks remembered the quote's source: Splash, the fantastical 1984 romantic comedy in which his Average Joe character falls in love with a mermaid (played by Daryl Hannah).

Watch the scene in question here if you're still just as lost as Hanks was in his car that day.

That time Tom Hanks was given something to humble-brag about to music buffs…
Keeping the subject matter connected to Hanks’ illustrious film career, Oliver also asked his on-stage partner if there's any one particular scene or moment from any of his movies that remains the most special to him. Hanks pointed to That Thing You Do!, the feel-good 1996 music-driven romp that was his first feature film as a director. For Hanks, the production was "personal, filled with joy, and a great hang," and it also produced the scene he’s most proud of overall: the moment when the film’s fictional rock band hears their song on the radio for the first time.

For some time after the film's release, Hanks wasn't quite ready to confidently label that scene as his personal favorite until a big-name celebrity supported his belief. That changed, though, one day when Hanks ran into Bruce Springsteen. During their time together, "the boss” expressed his adoration for that sequence in That Thing You Do!, which Springsteen said perfectly captured how he and his band-mates felt when they first heard their music on an FM station. Hanks understood the New Jersey rock god's feeling. "Most movies have those personal moments that hit you like a ball-peen hammer and stick with you," he told Oliver.

Watch a clip from the talk: