The Oscar-winning collaborators behind CHILDREN OF MEN and GRAVITY sat down for a very special Tribeca Talks: Directors Series event. 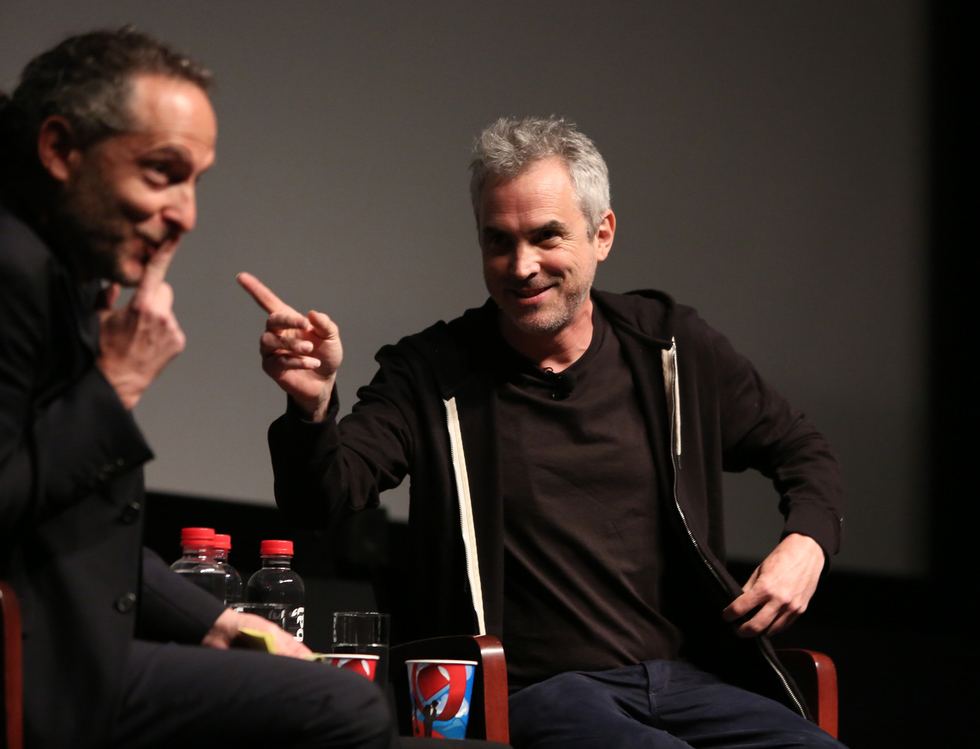 Alfonso Cuarón and cinematographer Emmanuel Lubezki are responsible for two of the most significant cinematic achievements in recent memory: Y Tu Mamá También (2001), shot in their home country of Mexico with then-unknowns Gael Garcia Bernal and Diego Luna, and Children of Men (2006), featuring a breathtaking 12-plus-minute single-take sequence. Cuarón and Lubezki made their film debut together in 1991, with Solo con tu pareja, and have since joined Hollywood as two of its most celebrated creative giants. Lubezki, a.k.a. "Chivo," is the only person to have won the Oscar for Best Cinematography in three consecutive years; this includes 2014's Gravity, for which Cuarón won for Best Director.

In a gift to cinephiles, and as part of the Tribeca Talks: Director Series, the duo discussed their long friendship and creative partnership yesterday at the School of Visual Arts (SVA) Theater.

"I met Alfonso [Cuarón] a long time ago, before he was born," quipped Lubezki, who has known Cuarón since they were teenagers, when they attended the same parties, hung around the same cinematheques, and flirted with the same girls. They first bonded over their shared love of music, particularly the Talking Heads. Lubezki wondered how Cuarón had learned to seriously discuss films from such a young age, when he himself still didn't understand the intricacies of "color in an Antonioni film." "That's what happens when you're a loner," explained Cuarón. "I was watching a lot of movies and always reading about them."

Cuarón went to film school, and Lubezki followed soon after, often serving as assistant or cinematographer on his sets. "Alfonso is the most important teacher in my life," exclaimed Lubezki. Cuarón countered, "It was clear he understood the whole thing better than me."

After graduating, Cuarón worked as an assistant director and Lubezki his second assistant. Working for the Mexican television show Hora marcada (for which Guillermo del Toro also directed episodes), they became more independent with the freedom to do what they wanted. It was on that job that they "learned how to make a shot work," said Lubezki. It wasn't until Cuarón and Lubezki collaborated on Solo con tu pareja, however, that they aimed to "make an entire scene work." Lubezski cried after shooting a circular tracking shot from a helicopter. “It was the first time we tried to light something with a dramatic objective,” said Lubezki. "It was very stressful. I couldn't sleep. I really wanted it to work." (Cuarón’s response? "It didn’t!")

Coming to the states, they felt like "imposters" and the "ugly sheep," said Cuarón, who directed an episode of the film noir series Fallen Angels (with Lubezki as his DP), which already had a roster of high-profile directors, including "the Toms" (Hanks and Cruise) and Steven Soderbergh. "It was very scary," said Cuarón. "I didn't speak English. It was so bad." Thankfully, a "pep talk" by a cast member, the great Alan Rickman, before beginning the second day of shooting allowed Cuarón to push forward.

Their conversion into true masterful artists took time, experience, and many mistakes. Great Expectations (1998) was a "complete failure," said Cuarón; the green color scheme was an overly "contrived" attempt to "compensate visually" for the lack of a strong screenplay. "It was a problem of tone," he admitted. "I didn't understand that film at all." Yet Cuarón learned from that terrible experience, and the need for change brought him back to his roots, to what first drew him to cinema. "It was a turning point."

Cuarón rented a stack of his favorite films on VHS from a video store on Greenwich Avenue and began to again engage with cinema in new and old ways. From that reflective pause, as well as a series of long conversations with Lubezki "about language," arose Y Tu Mamá También, for which they returned to México—to the language, places, and characters they knew well. It was the film they would have made before film school, said Cuarón. "We knew these guys," added Lubezki of the two best friends at the film's center, played by Bernal and Luna.

The secret to a great film can't be constrained by a single characteristic or cinematic element. "It's a mystery," insisted Cuarón. It works when "everything suddenly clicks." Y Tu Mamá También "was very liberating," said Lubezki, to which Cuarón added, "We surrendered to the colors of reality.” It was the first time they experimented with long takes, objectivity, and natural light. ("It's the one I like the most,” proclaimed Lubezki.)

Much to the audience's dismay, Cuarón and Lubezki sadly ran out of time before arriving at Children of Men. But it was clear that their love for each other and their honesty, even if at times brutal, are the keys to the magic they generate. "He uses the most lights and is the slowest guy on the planet," joked Cuarón; Lubezki continued the playful teasing by continually citing Cuarón's tendency to re-shoot scenes for perfection.

If it means they'll never stop creating films as exceptional as Y Tu Mamá También and Children of Men, they can take as long as they please.