Home » Tribeca News » Interactive Social Action: How Virtual Reality is Being Used to Educate and Empathize
View All News

Interactive Social Action: How Virtual Reality is Being Used to Educate and Empathize

Three new VR projects, all of which premiered at the2016 Sundance Film Festival, demonstrate the immersive platform's storytelling capabilities. 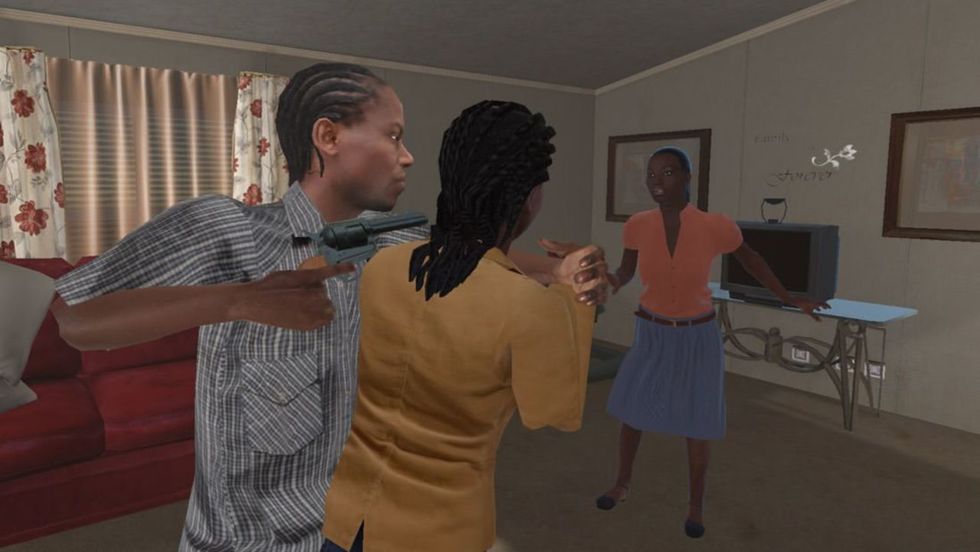 Virtual reality has exploded over the past few years from something you’d only see in science fiction movies to something you can actually experience at home. From the New York Times' VR app to the proliferation of Google Cardboard kits, the technology’s expansion has turned it into a new playground for artists and filmmakers, who are now crafting a new cinematic language for 360° views and storytelling. And thanks to advances in technology, all that most home users need is a smart phone and a low-cost device like the aforementioned Google Cardboard.

One of the newest filmmakers exploring this sand box is director Lucy Walker (The Crash Reel). While working on a follow-up to Wim Wender’s The Buena Vista Social Club, Walker fell in love with the various dance styles she saw at the band’s concerts in Cuba. To capture that choreography, she developed the short VR project A History of Cuban Dance, filmed on a custom VRSE rig. Walker chronologically traces many of the island's most popular dances with a voiceover explaining the country's history to the viewer, including major events like the 1959 Revolution, in front of sweeping views of Cuba's capitol city, Havana.

"You can see history in their dancing," says Walker. "I loved dancing, but I never thought about that before. I was trying to shoot as much as I could and learn as much as I could." While covering every step from old-school rumba to hip-hop-influenced reggaeton, Walker skillfully plays with the VR rig's placement, alternating from an outsider’s perspective into the middle of a dance circle. You must constantly turn around to see your surroundings, which is its own kind of dance. "You can't film too far or too close,” explains Walker, "and you need to shoot at nose height for VR."

In addition to immersive entertainment, the virtual realm can also be an outlet for teaching empathy. VR pioneer Nonny de la Peña, who received the TFI New Media Fund in 2013, has explored that possibility through her work with Emblematic Group. Her earliest piece for the Oculus Rift was Hunger in L.A. (2012), made as part of the larger USC multimedia project Hunger in the Golden State; set during the height of the recession, Hunger in L.A. places viewers in a food line as a man passes out from diabetic shock. It's up to the viewer whether to check on the man or to simply be another onlooker.

"[Hunger in L.A.] was originally supposed to be a traditional blend of audio, video, and stills," says de la Peña. "But then my intern was out capturing audio at a food bank, and while she was there, a diabetic man waiting in line collapsed and went into a coma, because he couldn’t get his food in time and his blood sugar level dropped too low. When she came back to the lab with this footage, I knew I had to try and tell this story in this new medium."

De la Peña’s latest work is much more interactive but no less emotionally provocative, continuing what she started with Trayvon Martin Project, which premiered at last year's Tribeca Film Festival. In response to violence against abortion providers and women’s health clinics, de la Peña and her team developed Across the Line, set around the safety perimeter of an abortion provider.

A departure from most of her earlier work, Across the Line starts opens on a scared young woman who’s thinking about getting an abortion. It then jumps back to her friend driving her to the clinic where they meet hostile anti-abortion activists who yell slurs and try to cajole her to turn away. Then the simulation begins, and you become the woman trying to get to the health clinic past the protestors. Your friend is outside, slowly leading the way while protesters harass you with slurs like "whore" and damnations ("You'll burn in hell!"). Like most of the Emblematic Group's work, there's a dose of sobering truth in Across the Line, for which de la Peña uses real recordings of anti-abortion protesters hurling insults at women entering Planned Parenthood facilities.

While you have the freedom to move past the row of protestors, the simulation doesn't allow you to run away from them into the safety of the building. It’s timed to make you feel like you've endured the longest walk of your life. You hear every slur with weighted clarity, and even if your instinct is to bolt through the clinic doors, you can’t. You’re in her shoes, frightened by the mob and stuck within the moment.

"You have to throw all the established tools and language of making films and videos out the window," says de la Peña, in regards to creating unique VR experiences. "There are no close-ups, no cuts, no tracking or panning. You have to even really lose the idea of a camera. You are creating what we call an ‘embodied experience,’ where the viewer is free to move around as they wish. So it’s partly about finding the right story to tell—the right scenario to build, with the appropriate amount of stuff going on—and then it’s about creating that scenario as effectively as possible."

Across the Line’s harrowing story is matched by that of Kiya. Based on a real 911 call, de la Peña's second New Frontier work places the viewer at the scene of a tense domestic violence stand-off that turns fatal. Two of Kiya's sisters try to save her from her partner’s abuse, and the viewer experiences the painful minutes waiting for the police to arrive. As the situation escalates, he draws a gun. Although the viewer doesn’t see the heinous murder-suicide, he or she is standing outside with Kiya’s two sisters as they scream and cry. The scene fades to black as a gut-punching fact about the prevalence of fatalities from domestic violence appears on-screen.

"The main difference in moving journalism to the immersive realm, from an emotional point of view, is that VR puts you 'on the scene' like no other medium can," says de la Peña. "It makes the viewer literally feel present, and that presence generates a high degree of empathy. That's what makes it such a powerful tool for communication."

Like Walker, de la Peña is also excited about the rapid growth of VR. "We've always been focused on walk-around, or volumetric, VR, and the great news for us is that the three major headsets due to hit the market this year—the HTC Vive, the Sony Morpheus, and the Oculus Rift—will all enable it," says de la Peña. "We now demo our pieces on the HTC Vive, so we no longer have to lug around the huge cases of equipment we used to need for our motion sensor cameras."

Intrigued by virtual reality? Click here to learn about all of the VR and innovation projects that will be at the 2016 Tribeca Film Festival, taking place April 13-24.