Hoping to spread the gospel of virtual reality storytelling, the Kaleidoscope VR Film Festival has been moving around the country over the last two months. So what's it all about? We visited Kaleidoscope's New York City stop to investigate. 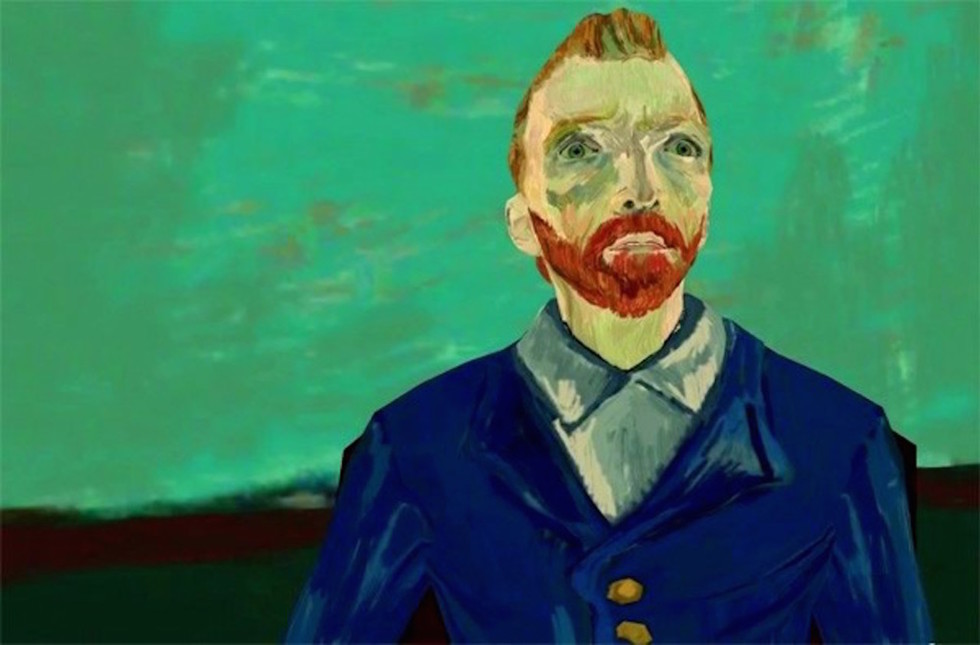 A scene from THE NIGHT CAFÉ, Dir. Mac Cauley. Photo by Kaleidoscope.

Spending three hours at a virtual reality film festival taught me something I never thought I'd accept as a rule: avoid the free champagne.

That lesson isn't applicable to any other film fest—usually, when the booze is priceless, it'd be uncivilized not to imbibe. But a VR fest is nothing like your typical celebration of indie movies. It’s something that every cinephile needs to experience. It's a look into the future of storytelling. As more festivals follow the Tribeca Film Festival's Interactive program's lead, and more studios and production companies piggyback on what’s being done for the Paranormal Activity and The Hunger Games franchises, VR will continue to establish itself as the new normal.

When it comes to all-VR festivals, though, remember this second rule: keep aspirin handy afterwards.

Earlier this week, the countrywide traveling Kaleidoscope VR Film Festival made its penultimate stop in Brooklyn, bringing 20 independently made virtual reality shorts to the small gallery-like space of 26 Bridge, located within a few miles of the Brooklyn Bridge. Along the room's right-side wall were over 20 white swivel chairs; on those chairs, Kaleidoscope attendees, whose faces were covered by white Samsung Gear VR headsets, traveled to worlds as diverse as South Asia, Syria, and outer space. Some fest-goers rotated their heads to the sides and upwards with vigor, frequently mouthing the word "whoa" to nobody in particular; others reached in the air for nothing while accidentally copping feels of the blue-shirted Kaleidoscope volunteers and fellow ticket-buyers trying to walk past their seats.

At one point, I, too, fell victim to the VR sensation and extended my hands outward, only to lightly graze a young woman volunteer’s derriere. Embarrassed, plus also recoiling against the possibility of her fist flying at my face, I quickly took the headset off and apologized. Thankfully, the volunteer, named Sarah, laughed and replied, "Don’t worry, you aren’t the first person who's done that tonight."

One of the evening's other common occurrences: nausea.While waiting on line for the animated VR film Colosse, I conversed with a couple other Kaleidoscope dabblers. We discussed what had brought us to 26 Bridge. Natalie, an NYU film student, was there out of a professional obligation of sorts. "Since I want to be a director, I figured I should see what this stuff is all about," she reasoned. "Who knows, I may end up making one of these things." Jacob, a middle-aged finance worker, holding a motorcycle helmet, had a different take: "Virtual reality just seems out-there. I knew, at the very least, this wouldn't be boring." Natalie had seen seven Kaleidoscope films by that point; Jacob, five. Their closing statements echoed the same sentiment: "It's been pretty cool so far, but, man, I'm starting to feel kinda sick."

Within my nearly 180-minute time-frame, I watched 14 VR films, which ranged from only two minutes in length to a few longer, more narrative-driven 15-minute projects. The rest of the time was spent waiting on lines for empty seats and free Oculus headsets, but rather than merely stand idly, I used those breaks to regain my bearings, and to quell the vomit building up in my lungs. The combination of the films’ dimension-stretching visuals and the constant turning of my head left me feeling dizzy. I marveled at the undeniably impressive technology and progressive storytelling on display while also realizing that binge watching VR isn't dissimilar to riding an amusement park's whirling teacups for hours on end. Except that, when you're a little kid enjoying carnival rides, you haven't just helped yourself to complimentary champagne glasses. Forget about mixing liquors—one should never mix bubbly with virtual reality.

In short doses, VR can be amazingly surreal, and several of the short films included at Kaleidoscope's NYC stop definitely lived up to the event’s underlying modus operandi to explore the "potential to reinvent cinema." At their best, Kaleidoscope's films provided the opportunity to do things I never thought I'd get to do, and to carry out those actions in fascinatingly voyeuristic ways.

In The Nepal Quake Project, produced by the leading virtual reality company RYOT, you're dropped into the aftermath of the April 2015 earthquake that killed 9,000 people in the South Asian country and left more than 23,000 others seriously injured. For four minutes, Susan Sarandon’s voice guides through the devastating rubble and lets you watch the survivors form lines to acquire the necessary aid. You're standing within mere feet of the Nepalese victims, and it’s harrowing. A few of the soul-crushed and physically damaged citizens looked me directly in the eye, as if they were on the verge of saying, "Go ahead, stand there and do nothing to help me."

I felt ashamed, not to mention mortified by the fact that, minutes earlier, I'd finished watching a two-minute animated VR film titled Butts, in which a pair of hairless cartoon characters meet up in a vast desert to see who can shoot the most glitter squares out of their asses by digging their hands into the cracks.

Surely a product of my own guilty conscious, I later envisioned the man who stared at me in The Nepal Quake Project saying, "I'm here struggling to survive and you're watching glittery fart contests?"

An English woman joined him in that disappointment, which added to my self-loathing. Even more voyeuristic than The Nepal Quake Project was Witness 360: 7/7, a 13-minute testimonial from Jacqui Putnam, a middle-aged lady who managed to walk away breathing after a July 2005 train bombing in London.

As Putnam solemnly recounts the day’s events, you're taken through her nightmarish experience step by step, from sitting on the subway platform alongside other commuters to standing in the train cart as folks read their books, play on the phones, and occasionally glance in your direction; then, the headset’s screen goes dark, and Putnam tries to describe what’s essentially the midsection between life and death, when she assumed she'd been killed by the sudden explosion, only to wake up and find herself lying in the bushes of the train line’s neighboring woods.

The Nepal Quake Project and Witness 360: 7/7 fell into Kaleidoscope's "Documentary" category, and it’s through films of their kind that VR's immersive power can really be surmised. Granted, live-action virtual reality isn’t uniformly profound. In Kaleidoscope's silly, less-than-two-minute diversion The Archer, you’re dropped into the middle of a black-and-white silent film, complete with rambunctious organ music, cutaways to white dialogue written on a black screen, and the actors' sped-up, Keystone Kops movements.

A woman challenges her male lover to put an apple on his head so she can shoot the fruit off with her bow-and-arrow, and your eyes zoom around the terrain as they run around to set up the gag, but they zip by so fast, and the film’s heightened speed is so erratically executed, that it's hard to keep up with it all. It's like watching a shaky-cam-loaded found-footage movie directed by Charlie Chaplin.

But in The Nepal Quake Project and Witness 360: 7/7, the direction is fluid, and observational. You're allowed to soak all of the landscapes in, to look around at your own leisurely pace, and to get a real firsthand feel for the subjects' plight. To their credit, and despite their emotionally draining nature, Kaleidoscope’s documentaries didn't the aforementioned nausea. That came more from the animated VR films, many of which were Kaleidoscope highlights but would’ve been best experienced between extended respites. Watched back to back, the seven not-live-action films I checked out left my head lighter than an empty champagne glass.

The coolest of the bunch was Sightline: The Chair, a mesmerizing exercise in interactive science fiction. It starts out in a darkly lit room, where a young man on a video monitor instructs you to constantly move your eyes around, because Sightline's images alter whenever you look away from a certain place. Think the oscillating fan gag in Paranormal Activity 3, but much bigger in scope.

The room morphs into a gorgeous, sunlit jungle, which then changes into a rainy, unpleasant urban metropolis; as you turn your head away from the city's empty street, the loud sounds of a car crash flood your ears, and when you turn back to the street, there's a battered car wrapped around a telephone pole. The street eventually dissolves into a star-filled sky, and as you look down, you see that you’re floating above Earth, and the bombastic noises coming from behind you are from an asteroid shower that keeps getting closer to your body. Before you’re about kiss a space rock, though, you're placed inside a brick-walled room; with each rotating scan of the four-cornered space, the walls close in on you, before you’re trapped like the poor bastard in Edgar Allan Poe’s story "The Cask of Amontillado."

Sightline reminded me of Stanley Kubrick's 2001: A Space Odyssey, in how it sends the user through an evolution of time and, well, space. The influence of Kubrick’s brilliantly ahead-of-its-time sci-fi masterwork was also evident in Tana Pura, a three-minute "audio-visual experience" that plays like a slowed-down version 2001's infamous lightshow sequence. An original composition by Radiohead member, and regular Paul Thomas Anderson soundtrack handler, Jonny Greenwood gives Tana Pura an eerie ambiance, its piano notes and macabre violin strings slightly echoing the music heard in that other Kubrick-directed genre masterpiece, The Shining.

VR's unexpected creepiness permeated my personal favorite Kaleidoscope film: The Night Café, which is best described as an art lover’s wildest dream that slowly turns into a waking nightmare. It puts you inside a Vincent Van Gogh painting and allows you walk around the premises of a decadently colorful nighttime haunt. There’s a bartender dressed in all white who does nothing but stand in the middle of a room; an exploration of the venue confirms that the hauntingly soft organ arrangement that’s clouding the VR headset's earphones is coming from an actual organist, who never lifts his head up from his instrument. Seated a few feet behind the musician is Van Gogh himself, who gets up from his throne-like chair, rushes over to an open window, stares up into the nighttime sky longingly, and then darts back to his seat. What he’s searching for the in sky is unknown, but the repetition of his looking, like he's stuck on a skipping vinyl record player, suggests that this particular café is a kind of purgatory.

You navigate the café by moving your finger on the headset's track-pad, yet the pad’s sensitive surface is tough to master; a slight tap on it sends your The Night Café avatar into an unintended hyper-drive. My effort to see what Van Gogh sees outside the window pushed me fully into the painter’s body. I looked down, saw his hands, turned my head, and the organist was looking directly at me—it was terrifying. I swear I heard The Twilight Zone's theme music in the background, but it was probably that third helping of champagne.

In that moment, Butts didn’t seem so bad.

The Kaleidoscope VR Film Festival will wrap up its 2015 run in Austin, TX, on Wednesday, October 14. More information here.